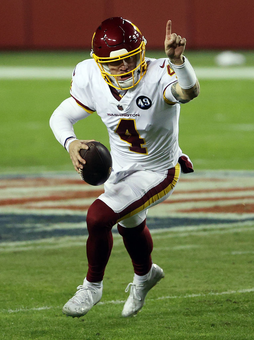 Waiver wire rules can vary from dynasty league to dynasty league. Some are open at all times to add players, some don't open until just before the season. Mine opens next week, a couple of weeks after the rookie draft. There are some interesting veterans available.

Obviously, all of these players aren't available in your dynasty league (if you're even in a dynasty league; if not, look into getting into one!). But some of them no doubt are, or will be. Here are the best of the unrostered veterans in mine.

1. Taylor Heinicke, Washington. Heinicke (pictured) came about as close to knocking off Tampa Bay in last year's playoffs as Drew Brees, Aaron Rodgers and Patrick Mahomes. Ryan Fitzpatrick will likely be Washington's starting quarterback this season, but Heinicke is a strong possibility to be the No. 2, and everyone is aware that Fitzpatrick is what you might politely call streaky. Some chance he starts some games throwing to McLaurin-Samuel-Thomas-Gibson, and he'll run some, too.

2. Greg Ward, Eagles. Wideouts don't get much less exciting than Ward, but if you're not betting on him leading this team in receptions this year (at least at wide receiver), you're betting on Jalen Reagor, who didn't do much as a rookie, or DeVonta Smith. I have no doubt those youngsters are going to play a ton and they're going to try to get the ball to them, but Ward should be a security blanket underneath for Jalen Hurts.

3. DeeJay Dallas, Seahawks. Chris Carson is the starter, but injuries are often an issue for him. With Rashaad Penny, I'll believe it when I see it. There's some chance Dallas is the No. 2 in an offense that wants to run the ball. I expect he'll start some games this season.

4. Giovani Bernard, Buccaneers. It's a crowded backfield he'll join in Tampa Bay. But the plain truth is that neither Leonard Fournette nor Ronald Jones is good in the passing game -- Fournette is occasionally productive but that's strictly because the team didn't have a better option on the roster to play in passing situations. Now they do. Bernard might be a better weekly PPR option than either of the backs technically ahead of him. (If they believed in KeShawn Vaughn, they probably wouldn't have signed Bernard.)

5. Tyrod Taylor, Texans. I'd say there's about a 95 percent chance that Taylor is Houston's Week 1 starter, with those odds going down with each ensuing week of the season, either because Deshaun Watson has served a suspension or the team decides to chuck rookie third-rounder Davis Mills into the lineup to take his lumps. Taylor as a starter has more fantasy appeal than you might think, due to his running ability. And he'll be running plenty while trying to generate offense for a Houston roster that should be overmatched most weeks.

6. Byron Pringle, Kansas City. Sammy Watkins is gone. Demarcus Robinson is Demarcus Robinson. Mecole Hardman could reasonably be anywhere from the No. 2 to No. 4 wideout. Maybe this will be Pringle's time to shine, stepping in due to a Tyreek Hill hamstring injury or the team finally setting aside Robinson's non-existent upside. Nobody should bust the waiver budget for Pringle, but a prominent early-season role working with Patrick Mahomes is in the realm of possibility.

7. Jets running backs. Both Ty Johnson and Lamical Perine are available in my league. Possibly Tevin Coleman too. If you don't think any of these players is starting this year, you're banking on a fourth-rounder who the team lists at 5-foot-8 and 201 pounds, Michael Carter, as the starting running back. Carter is definitely the best bet to eventually start here, but it's a really low bar, and it wont' necessarily happen in Week 1 regardless. Perine (last year's fourth-rounder listed at 5-foot-11, 216 pounds) will likely be picked up the first day the wire opens, maybe by me.

8. Donald Parham, Chargers. Los Angeles signed Jared Cook, and that's a downer, with Parham looking like a candidate to replace Hunter Henry at tight end prior to that. But Cook is on the verge of crumbling into dust, and Parham flashed some ability when starting the last two games last year, catching 5 passes for 84 yards and a touchdown. A nice dynasty target.

9. Blake Bortles, Packers. I remain of the opinion that Green Bay will work out at least a one-year situation with Aaron Rodgers, but stranger things have happened. Jordan Love might need another year before he's ready to start -- remember, he was the No. 3 behind the immortal Tim Boyle a year ago. Blake Bortles, who did take a Jaguars team to an AFC Championship game a few years back, has an outside chance of being Green Bay's Week 1 starting quarterback.

10. Tim Tebow, Jaguars. Yes, there's much hilarity in the jokes surrounding Jacksonville's 33-year-old tight end. Realistically, he's a longshot to make the team's 53-man roster, or to be a fantasy factor. But he's an athletic, hard-working guy, the new coach is in his camp, and after James O'Shaughnessey the other four tight ends on the roster have a total of 13 NFL receptions. And none of those players will get local eyes on the TV screen or put fannies in seats. Tebow, No. 2 tight end and red-zone weapon. It could happen.