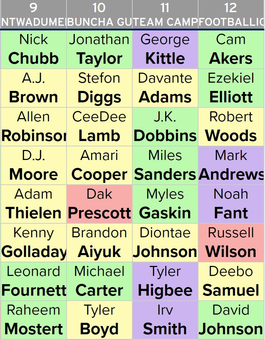 I participated in a best-ball draft at myffpc.com last week. I like to do one or two each year, at a low investment level -- there's a lot of chance involved in any league where you can't make any moves after the initial draft. I drew the 12th slot, and I think it's a really good year to have a later pick.

The entire draft board can be seen at this link. FFPC scoring is PPR, with 2 flex spots, and tight ends get 1.5 points per reception. For that reason, tight ends go really early -- note three in the first round -- and it makes sense to have multiple good starters. I think I did well in that area, not as well in some others. A recap of my picks.

When you see the magazine, you'll note that we're pretty high on Akers; I could have selected him half a dozen spots earlier. So to get him at 1.12 was the easiest pick of the draft. I think it's nice to have a top pick and start out with McCaffrey or Cook, but all of the other top running backs have flaws -- injury, poor team around them, questionable quarterback. So getting a possible top 5 back in Akers and also getting the No. 1 pick in the 2nd round feels great. I/we don't love Elliott, and frankly straight off our board I should have taken Austin Ekeler here, with PPR scoring. But Elliott was good enough when Dak Prescott was healthy last year and his role is certain enough that I thought it'd be irresponsible to let him fall any further. I decided on one (in my eyes) safer choice of my top 2.

The negative in picking at the end of the odd rounds, of course, is getting the last 3rd-rounder of the draft. In my case, you can see between 2.o1 and 3.12, a whopping 12 wide receivers went off the board. And we've got many of them ranked higher than Woods. But he was the best choice at my pick, by far, so I'm counting on Matthew Stafford making Woods a top-10 or 12 wideout. As for Andrews, I don't love him, and I considered taking another wide receiver -- either DJ Moore or Mike Evans. But I like the depth a lot better at wideout, and in this TE-premium scoring, if you don't take a tight end before 5.12 you might not like what you're left with. Although...

Fant being available at 5.12 was a pretty pleasant surprise. I like him as a possible breakout player at the position, whoever starts most games at quarterback for Denver. As for Wilson, I see seven elite quarterbacks: the five already taken, Wilson, and Justin Herbert, who went before my next picks. Ideally I wouldn't have taken my quarterback quite this early, but I wanted to get one of those players, and I'm pretty sure I wouldn't have if I waited.

I don't like anything about Houston this year. But I really don't like the scrap heap backup running backs they've added, and I know that Johnson is their best pass catcher. He's going to start and carry at the goal line, and even if he runs for just 50-60 yards per game, he'll catch 4 passes for 40 more and score the occasional touchdown. None of the next 10 running backs off the board are starting for their teams. Hate Houston and knock David Johnson if you wish, but I'm very comfortable with that pick.

Firkser doesn't look so great in retrospect, and that was before Tennessee brought in Julio. But I like him a lot more than any of the remaining tight ends, guys in tandems or crowded passing games. Firkser is Tennessee's lone viable receiver at the position right now. Considering the second-half numbers from Evans, Godwin and Brown a year ago, I'm pretty pleased to draft Brown six rounds after those other guys. Just hope he stays out of off-field trouble.

This is best-ball, and Henderson is as locked in as the Rams' backup running back as any other No. 2. If Akers gets hurt or disappoints, Henderson should be close to a three-down back. Quarterbacks were getting thin (20 were gone and 5 went right before my pick). I considered Carr, Baker Mayfield and Ryan Fitzpatrick, and went with Carr due to the upside in a team with a lousy defense, unlike the other two. I suppose there's some chance of Carr being benched, but I did get his backup later on.

Two wide receivers start in this league, but up to four with the flex spots. And I'd only drafted three to this point. With a sameness setting in with the remaining running backs and tight ends, I took three straight wideouts who either should or will open the year as starters and possible No. 2s in their respective offenses. I drafted Moore before the story came out that the Jets want Jamison Crowder to take a huge paycut, but that possibility wasn't a big surprise, nor is the strong chance the next story we'll hear about Crowder is him being released. Shepard is basically fighting with Darius Slayton and first-rounder Kadarius Toney for targets behind Kenny Golladay. When healthy, he's produced for PPR teams, and optimistic to assume Toney starts right away.

No great science to this one. Decent chance he'll be half of a committee in one of the league's best offenses. Not much better positional players available in Round 16.

Kickers and Defenses flying off the board. Magazine spoiler, Succop our top kicker, the Browns a top-6 defense for sacks/takeaways/touchdowns. The others are also starter-type options in 12-team leagues, and I was advised here last year that a high percentage of winning teams in this thing have three kickers (and I proceeded to get burned last year by only taking 2, having them get hurt/released, and winding up without a kicker in a number of weeks). I'm pretty sure these three guys are starting in Week 1 and beyond.

Oh yeah, Taylor. Wanted a 3rd quarterback, and Taylor was the last starter left. I considered Teddy Bridgewater or Drew Lock, or Cam Newton or Mac Jones, a couple of rounds earlier. But all had the same flaw of maybe starting 8 or fewer games. With Taylor, who looks certain to be Houston's Week 1 starter (Deshaun Watson is facing a lengthy suspension), there's the running upside that only Newton of the others has. I think Taylor is starting 10-plus games this year, and he probably won't outproduce my other quarterbacks very often anyway.

Could these last six picks be the key to my draft? First things first, in the case of Slayton, Uzomah and Lazard, I'm not sure why they were all still available. Slayton I guess I understand, but he's flashed at times, and made extra sense to me having already drafted Sterling Shepard -- one of those guys is almost definitely going to be New York's No. 2 receiver, and the other might be the No. 3. Uzomah had a nice pass-catching role before getting hurt last year; he's better than Drew Sample and should start for Joe Burrow. And Lazard has to be the favorite to be Aaron Rodgers' No. 2, unless we're all still waiting for some consistency from Marquez Valdes-Scantling. No, none of these guys will necessarily be league-winners. But it's the 23rd-25th rounds. They could be occasional week-winners, and that counts for something.

LeVeon is a flier, what the heck. With Mariota and Palmer....well, I screwed up. I had them in my queue, with about 8-10 other players, but I hadn't actually ranked them; I just wanted some names to consider when my pick came up. I went to bed at 11 one night while a couple of picks away from my turn. I thought the 2-hour draft timer was off from midnight until 8 a.m. Nope: it was off from 2 a.m. to 8 a.m. (Which I really dislike, by the way: it's June. Do I really need to stay up past midnight not to have a player autopicked for me?) Somebody picked at 11:15, the clock expired on me at 1:15, and it drafted the two players atop (that is, added to first) my queue while I slept. I suppose I'm OK with locking up the Las Vegas quarterback each week, and Palmer could be a nice rookie for Justin Herbert (I drafted him in dynasty). But if I'd been awake, I would have drafted Will Dissly with one of those picks, and maybe a different second player, too.

So that's my draft. Go ahead and rip it, I can take it. Objectively, it's not my favorite team. First draft of the year, and picking at the end of rounds can be tricky -- you often either have to take somebody early, or it'll be too late. I like my starting lineup, and think I have enough depth at both WR and TE to have plenty of good players there and at the flex spots. But if Russell Wilson underperforms or hands it off a lot, I'll be a lesser team at quarterback, and my running back depth isn't great.

Looking at the other teams, I don't see a clear standout. I like the first half of Team 2's draft. I also like Team 4, who has a lot of players I think will be on a lot of Index teams. Team 11 has some good players. If I had to guess, I won't be winning this league, but you never know.