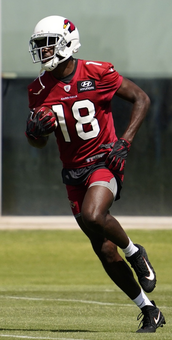 I see that Kyler Murray is talking up A.J. Green. The Cardinals signed the veteran to a one-year contract, and Murray says he likes what he’s seen so far. If Murray is to believed, Green is going to make a positive impact on Arizona’s offense.

“I expect A.J. to have a big year,” Murray said, per the team’s website. “I know a lot of people are sleeping on him. I know a lot of things have been said about him maybe not being able to do it anymore. … I’m glad he’s on the team.”

Count me among the skeptics. Green didn’t play at all in the 2019 season, sidelined by an ankle injury for all 16 games, while the team thought he would return in October. And Green was remarkably awful last year, putting up some historically awful numbers while two other wide receivers in the same offense (Tee Higgins, Tyler Boyd) were productive at least at times.

Green last year had 104 passes thrown his way, but he caught only 47 of those balls, and for just 523 yards (and with 2 TDs). By various measuring metrics, those numbers were some of the worst of the last 10 years. He averaged only 5.0 yards per pass play last year, last among the 87 wide receivers with at least 50 targets.

The Cardinals have DeAndre Hopkins, who’ll almost certainly lead them in receiver. They also have Christian Kirk and drafted Rondale Moore in the second round. So I don’t think Green is going to be one of their top 2 receivers (and I’m not even confident he’ll be one of their top 3). They signed him to a contract worth $6 million for this year, so apparently they have some belief he’s got something left, but I don’t see Green as a guy who should even be drafted in many fantasy formats.

I played around with some numbers on this (using stats pulled off Pro-Football-Reference.com). I could find only 10 wide receivers in the last 50 years who were at least 33 years old who finished with top-50 receiving numbers after not ranking in the top 40 in either of their two previous years. Typically with older receivers, when it looks like it’s over, it’s over.

Of the 10 players listed below, only two ranked in the top 40, and those who have been playing fantasy football for the long term will remember both of them. James Lofton (35 years old) resurfaced with 1,072 yards and 8 TDs for the Bills in 1991. And when Jon Gruden was coaching Tampa Bay in 2005, he ran the offense through Joey Galloway, with the 34-year-old shocking everyone with 83 catches for 1,287 yards and 10 TDs.

Nobody should be selecting A.J. Green with the expectation he’ll be one of the 50 most productive wide receivers this year.

Note: in the chart below, Willie Miller’s numbers seem lousy – 15 catches and one touchdown. But keep in mind that was a strike-shortened season, with teams playing only nine games. And Miller averaged 23 yards per catch. Had they played a full 16 games, Miller likely would have gone for 600-plus yards, getting him in the top 50 in an era where there was less passing and four fewer teams.