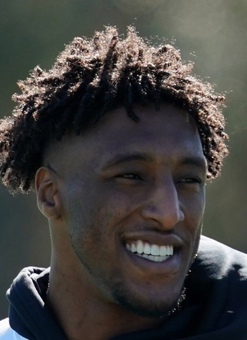 So 2020 was a lost season for the 1st wide receiver drafted in most fantasy leagues. A year after setting the NFL receptions record, Michael Thomas was limited to just 7 games after an early-season ankle injury than lingered all year (there was a hamstring issue and team suspension factored in). All behind him? Well, no.

Ian Rapoport says Thomas finally underwent surgery on that troublesome ankle in June. He says it's a four-month recovery timetable, which if correct will knock Thomas out for the month of September at a minimum. Unfortunate the decision to undergo surgery wasn't made in, say, February or March or April or even May, but here we are.

If you were already having doubts about the Saints offense post-Drew Brees, this will just strengthen them. Thomas over the last four seasons (even including last year) has been not only one of the league's very best but busiest wideouts. Among wide receivers to start at least half the time, nobody has averaged more catches per game than Thomas (7.6). Only seven are even within 2 catches of him.

Another player who sneaks into the top 30 on the above list is Emmanuel Sanders. Too bad cap problems forced the Saints to release him in the offseason. If you drift your eyes way down to the bottom of list, you'll see TreQuan Smith, sitting at 2.2 receptions per game. Hey, he's the nominal No. 1 New Orleans wide receiver right now. He finished strong a year ago, catching 2 touchdowns (one from Jameis Winston, on a trick play, but still) in the playoff loss to Tampa Bay.

Following Rapoport's story came another that the Saints are looking at free agent wide receivers. Good idea, and they'll probably be seeing if anyone is available for trade, too.

But in-house they're looking at Smith, Marquez Callaway, Deonte Harris, Lil'Jordan Humphrey and some even lesser lights. Is one of these guys a legit No. 1, or No. 2 wideout? Seems like a decent chance that player isn't on the roster right now.

Other beneficiaries are probably Alvin Kamara, who will see some of those short-range targets Thomas would have caught, and tight end Adam Trautman. But a big negative for the competing quarterbacks, and the passing offense in general.

As for Thomas, I don't see how you can comfortably draft him right now, period. A four-month recovery timetable on an injury that wrecked his 2020 season (as I write this I don't know if he had surgery on June 1 or June 30). We'll doubtless get more details in the days to come, but if you're drafting Thomas, it should be with the expectation that you won't have him for the first 4-6 weeks of the season, at a minimum. Maybe if you have a deep bench or IR spot, but the season might be half over before you can comfortably put him into a lineup. With Smith, I'm thinking maybe he moves up to about 40th at wide receiver -- I'm not comfortable drafting him any earlier than that, given his inconsistency to this point.