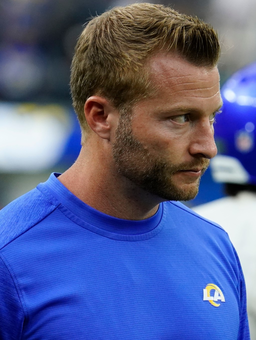 Expect to see fewer starters than ever

Let's appreciate honesty from coaches when we get it. In talking about new starter Darrell Henderson last week, Sean McVay said injuries were his only concern. "It's never been an ability question, it's about how do we keep him available? I promise you you're not seeing him in a preseason game." It's not a surprise, given McVay's history.

Back in 2018, McVay emerged as one of the coaches least likely to play starters in preseason games. Any starters: He held the entire starting offense out of all four preseason games. Jared Goff, Todd Gurley, Cooper Kupp, Robert Woods, Brandin Cooks, Tyler Higbee, Gerald Everett; those guys didn't play in August. The Rams have a brand-new quarterback in Matthew Stafford, and some will contend that surely the Rams will want to see him in a game before Week 1. Do not count on it.

Most of us grew up with starters being held out of the final preseason game; that was filled with third- and fourth-stringers just trying to make the 53-man roster. And we're fairly used to most franchise quarterbacks, running backs and wide receivers playing little, if at all in the preseason. Some coaches are exceptions or throwbacks, but more and more keep their key starters under bubble wrap than ever before.

Then 2020 happened, and the entire slate of preseason games was scrapped. There was much concern about how sloppy the start of the regular season would be, how many injuries would occur, and how rusty everyone would be with no practice games in August.

There were a lot of injuries, including to a lot of big-name players. But was it dramatically worse (setting aside the guys who wound up on the COVID-19 IR list) than in past years? Lots of big stars got hurt (McCaffrey, Barkley), but that happens every year. Lots of others (Cook, Kamara, Henry) kept on playing. Odds are none of the five players just mentioned will play a snap this preseason either.

Maybe defenses suffered from a lack of reps together; offenses certainly didn't. They took advantage. Last year NFL teams averaged 397 points. That was nearly 50 points more than the average of the previous 20 years; 40 points more than over the previous decade. Three-quarters of the league's teams (24 of 32) scored more points in 2020 than in 2019, some of them a lot more. Half of them (12) averaged more than 3 points more per game.

Point is that with nobody playing (or getting hurt) in August, offenses prospered. That's what the league wants to see. Most (not all, and we'll get to that in a moment) players don't want to play in preseason games anyway, and the NFL now has its extra regular-season game, a stepping stone to the 18-game season they've been pushing for for years. Will there be blowback this season from the league when even more coaches treat the preseason like Sean McVay? There will not.

So the McVay Way is coming, and I think it will be more widespread this year than ever before. Why would Bruce Arians play any key starters? Andy Reid, Matt LaFleur, Mike McCarthy, Sean McDermott. There's no discernible upside to doing so, at least in terms of offensive skill guys. Those guys did just fine in 2020 with no playing time in August -- statistically better, in fact.

Does the preseason matter? Yes. Just not for the guys like Darrell Henderson, Tom Brady, Davante Adams and T.J. Hockenson. If you're the clear No. 1 starter at a position with no discernible or even imaginary threat to your job, there is no reason for teams to play you, and I don't think very many will. (Not that players don't get hurt in practice, ala Cam Akers and Carson Wentz, but it's generally safer than an exhibition game.)

Fortunately, for those of us who actually do like watching preseason games, and who find them valuable for gleaning information, both in terms of player performance and usage and coaching tendencies, every team has plenty of camp battles. We know who the Rams No. 1 running back is, but we don't know who's next in line. We know Kupp and Woods are the top 2 wideouts, but who will be the No. 3 when DeSean Jackson limps off with a hamstring injury?

We have loads of brand-new skill guys in a new system to check out in Jacksonville, and five first-round quarterbacks who will absolutely be playing in August, so coaches can gauge if and when it's time to chuck them into the lineup. There are battles for backup running back almost everywhere, and pecking orders to be worked out at wide receiver. Pick a team, I'll give you a camp battle worth monitoring in August, that the exhibition games will shed some light on.

Even if the quarterback throwing to them isn't Patrick Mahomes, but Chad Henne.