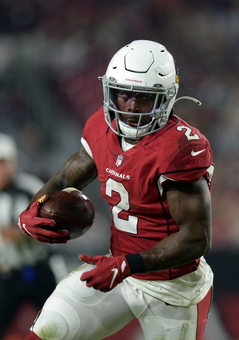 How deep is the running back position?

I'm participating in a FanEx Experts League draft. Ian's in one as well, the results of which he posted last week. Mine is into the 15th round, and he and I had similar draft positions (him 9th, me 8th). So interesting, I think, to see how our teams are turning out.

This is the Fanex League.. It includes three wide receivers, a flex and PPR scoring.

Ian and I agree that in this kind of league, having a couple of kick-ass wide receivers is critical. Had I been picking in the top 5, I'd probably have selected a running back, but with the 8th pick it was (I thought) an easy call to opt for the No. 1 wide receiver over the No. 7 running back. I debated a while between Davante Adams and Tyreek Hill, ultimately deciding on Adams. So I was pretty pleased to get Hill with my next pick at 2.05. Unexpected.

The problem with going this route in a draft is you're playing catchup at running back the rest of the way. When my 3rd-round pick came up, 19 running backs were off the board. I was considering Chase Edmonds or Josh Jacobs, and I don't believe there was a viable 3rd choice (I'm interested in Mike Davis, but thought I might be able to get him a round or two later). Maybe I could have gotten Edmonds a round later. Regardless, I had to go running back, and I personally like Edmonds more than Jacobs in PPR, for his role as a pass catcher, with the Raiders for some reason don't like Jacobs in. I picked Edmonds; whether or not I chose right, we'll see.

Ordinarily I wouldn't take a quarterback in Round 4, but I thought Josh Allen was too good to pass up. He went a round earlier in Ian's draft. I was thrilled to get Darrell Henderson at 5.08. He might be better than Edmonds. In Round 6 I went back to the WR pool with Brandon Aiyuk. In retrospect I could have maybe gone with Javonte Williams here, who I think will play in a busy committee with Melvin Gordon, my next pick. Gordon is a capable pass catcher, so he should be fine in PPR should I need him.

My next pick was another Bronco, Noah Fant, followed by the running back we're leaning will start in Detroit, Jamaal Williams. Straight off our board I could have taken him a couple of rounds earlier, but nobody else likes the guy. I should mention this selection occurred before Williams went out and averaged a yard per carry in Detroit's first exhibition, but whatever. He's healthy, he's getting half the work in Detroit, and a potential starting, pass-catching running back in the 9th round works for me.

From that point on it's been best available pass catchers, a backup QB with upside (Trevor Lawrence), and then a desperation running back choice who apparently is the heavy favorite to be the No. 2 for the Chargers, according to every camp report. The rest of the way I'll be looking at defense, kicker and backup running backs with a chance to do something.

In the table, my picks are in bold. Feel free to let me know where you think I messed up.