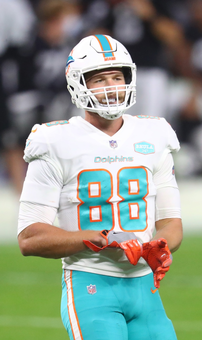 Miami tight end could be busy with Tua at QB

Tua Tagovailoa came out in his first game (at Soldier Field) completing a bunch of passes to his tight ends. That’s a reminder that for all of the quarterback’s struggles as a rookie last year, Mike Gesicki was actually more productive last year when Ryan Fitzpatrick wasn’t playing.

Parker and Will Fuller didn’t even play in the preseason opener, and Tua was on the field for only a couple of series, so we’re looking only at a brief, partial picture. They selected Jaylen Waddle with the 6th pick, but he wasn’t targeted (but did show off his speed on their first punt return – Waddle looks pretty certain to score on a return at some point).

Tagovailoa in general, I thought, looked a notch better than last year, with a couple of throws that were outside the range of where he was comfortable working last year. He had a couple of longer out throws to the sidelines that didn’t show up on his stat sheet. Adam Shaheen, I thought, should have caught the first ball thrown his way. Later, Mack Hollins had a nice sideline grab that was nullified by a penalty.

And Tua showed good touch and accuracy on his long completion to Gesicki that went for 50 yards.

Tua went 4 of 5 when throwing to tight ends, with the only incompletion the kind-of drop by Shaheen (not an easy reception, so I’m not sure how the drop counters would score that one). He went to Gesicki on a third-and-6 play to move the sticks; Gesicki was tightly covered, but the throw was accurate and Gesicki has really good hands (the best, I think, of any tight end in the league).

Tua went 3 of 4 when throwing to wide receivers, with the only incompletion a throwaway when Jakeem Grant was covered. Mack Hollins caught all 3 of the balls (plus the one that got erased).

Two other passes were both short throws to running backs.

I went back and checked into the 2020 numbers. I was of the impression that Tua was completing mostly short passes to backs and tight ends, while Fitzpatrick was going downfield to wide receivers. But the numbers weren’t as overwhelming as I expected. Tua attempted 281 passes last year, only 29 more than Fitzpatrick, so the workload was split pretty evenly.

With wide receivers, they accounted for 55 percent of Tua’s completions, which is only slightly less than Fitzpatrick (57 percent). The considerable pollutant here is Lynn Bowden, who caught 27 passes from Tua but hardly played with Fitz. Bowden mostly operates around the line of scrimmage, catching, short-range balls, including push-passes on jet-sweep type plays.

With tight ends, they caught 54 passes for 541 yards and 4 TDs from Tua. They caught 17 fewer passes from Fitzpatrick (though with 3 more TDs and almost as many yards). Tight ends accounted for 29 percent of Tua’s catches but only 22 percent from the Old Prospector.

With pass catchers, the difference between Tua and Fitzpatrick wasn’t so much distribution but where they were getting the ball. With the veteran, they averaged almost 2 more yards per catch (11.7 to 9.8).

Tagovailoa will always be limited by working with below-average mobility and arm strength, but I think he’ll close some of that downfield gap this year.