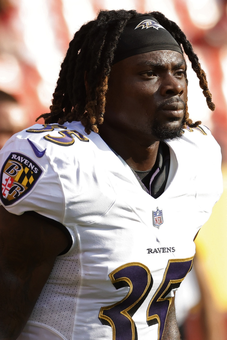 J.K. Dobbins tore his ACL almost a week ago, but the Ravens haven’t yet added a running back. Is there going to be a notable addition to the Baltimore backfield?

As it stands, they have only three running backs. Gus Edwards has run for just over 700 yards three years in a row; he doesn’t have much speed but can bang out yards between the tackles. Ty’Son Williams was elevated to the active roster briefly last year and made the 53-man roster by running hard in the preseason – consistently breaking tackles. But like Edwards, he wasn’t even drafted coming into the league.

And they’ve still got holdover Justice Hill, who’s run for only 285 yards in his first two seasons after they drafted him out of Oklahoma State in the fourth round. At 200 pounds, he’s on the small side – 20 pounds less than Williams and about 40 less than Edwards.

It would seem reasonable for the Ravens to add another body to this group, but the identity of that player will be key. They filed a claim for Royce Freeman, who was awarded to Carolina, but he likely would have been a backup or part-time guy for them. Is Freeman better than Ty’Son Williams? If they’re adding guys like Freeman, it’s a sign they think they’re fine with what they have.

The Ravens worked out Todd Gurley a few months ago, and he says he would like to play for them. That’s a possibility (if they think he has anything left). But with his knee issues, it’s fair to wonder if Gurley is as good as Edwards or Williams.

Other veterans are out there, including Adrian Peterson and LeVeon Bell. If the Ravens are planning on adding an older back, they might wait until after their Week 1 game (allowing them to avoid committing financially to the player for the entire season – would give them the ability to pull the plug if things weren’t working out).

The Ravens have Lamar Jackson, of course, and he’s a running threat himself, with over 1,000 yards in back-to-back seasons. But this is a team that runs the heck out of it. Two years in a row, the Ravens have run for over 3,000 yards.

The chart below shows the production of the Ravens’ running backs since Lamar Jackson moved into the starting lineup. Jackson started only the final seven games of his first season, so for that one, I took the figures for the second half of the season and doubled them.

Some running back on this team should be running for plenty of yards (but not catching many passes). Right now it’s looking like it’s going to be a combination of Edwards and Williams.