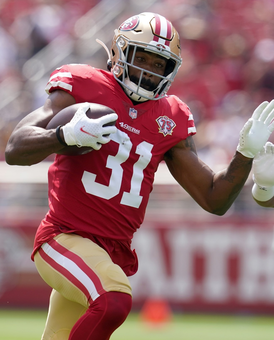 After Week 1, what will everyone be talking about?

ASK THE EXPERTS appears weekly from training camp through the Super Bowl with answers to a new question being posted Thursday morning. How the guest experts responded when we asked them: After Week 1, what will people be talking about?

Two mostly unwanted 49ers, Jimmy Garoppolo and Raheem Mostert, are going to look pretty good after shellacking the Lions. Garoppolo needs only to be a functional ball distributor to his excellent receivers to end up with a meaty box score. And Mostert should easily outpace rookie Trey Sermon for looks and should dominate a deeply vulnerable Detroit defense that allowed an average of 135 rushing yards per game and gave up the 2nd-most points to running backs last season.

Detroit's D'Andre Swift, with a lingering groin issue, gets banged up early against the tough 49er defense, but instead of "1A" running back Jamaal Williams, it's the 7th-round sensation from Oregon State, Jermar Jefferson, coming to the rescue, as the former Beaver legend tops 100 yards of combined offense with a pair of scores.

I initially misread this question as a seasonal prediction, answering Corey Davis makes the Pro Bowl. But since I have so much conviction towards it, let's just say Davis goes bonkers in Week 1 as well. He's always had the pedigree, now the opportunity follows. And Zach Wilson might be mature enough to hit the ground running.

Ben Roethlisberger displaying pre-surgery arm strength will shock teams, starting with the Bills in Week 1. Big Ben will throw a number of successful deep passes that will catch the secondary off guard. It's a trend that will continue all year with his outstanding wide receiver trio.

To me, the Patriots, Broncos and Steelers look like teams that people might view differently next week. I think New England will beat Miami, making people realized they’re a lot closer to Buffalo than to the other teams in the AFC East. I think Mac Jones will be just fine there. The Broncos, I think, will go into MetLife and win, making it clear they’re a tough, up-and-coming team with a good defense -- a playoff contender. With the Steelers, on the other hand, I think they could be beaten badly in Buffalo, making it clear they’re nowhere close to Cleveland and Baltimore in the AFC North.

I predict the biggest surprise among running backs this year will be Ty'Son Williams with the Ravens. He'll help Gus Edwards keep the Ravens going. He'll be the closest thing to this year's James Robinson. He is in a position to surprise running behind a very good offensive line on a team that loves to run. Gus Edwards has never had more than 144 carries even though the Ravens totaled 363 carries from the backfield last year.

I'm not sure I believe in Urban Meyer, but I do believe in Trevor Lawrence. When matched up with a lesser opponent and lesser defense, which Houston certainly, intentionally is, I think Lawrence is going to put up significant numbers, and win games, right away.