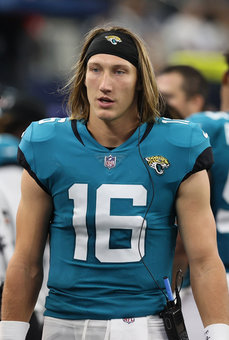 What follows is a brief look at all the games with how I'd react in my own lineups to injury developments or other news. The official rankings are the ones in the Weekly. Those take precedence. But sometimes players are very close, and in those cases I'm glad to offer opinions on how I'd approach those situations. Sometimes I like certain players more or less than Ian, and sometimes I have different risk tolerance with injuries etc. If I don't get to your question, either I missed it (it happens) or the rankings are very clear.

Welcome back to another year! Hopefully we can all help each other out. On to the games.

Jaguars at Texans: To me the Texans are a big joke this year and I can't imagine ever recommending any one of their players under any circumstances. Brandin Cooks is still a good player, I actually think David Johnson and Phillip Lindsay are too, I hope they at some point get traded elsewhere. I expect Trevor Lawrence to come out with a good debut game and win against this hopelessly screwed-up organization. I'd also use James Robinson. Jacksonville receivers, though, I'd rather wait and see on (but if I'd drafted Shenault-Chark-Jones, maybe I'd consider them in deeper leagues).

Chargers at Football Team: Young gun versus Old gun, should be entertaining. Austin Ekeler is the key question here. Questionable after a limited practice on Friday. I wouldn't use him in a FanDuel or Blackout type lineup, but if I drafted him in the first or second round I doubt I'd have a superior option. I think he'll play and probably be fine, there's just a little more risk than usual. Not 100 percent sure who the No. 2 will be so I wouldn't be using him (barring Ekeler being inactive and a starter being named Sunday morning). Love McLaurin and Gibson this year. No Curtis Samuel so Adam Humphries has appeal.

Seahawks at Colts: Starters are healthy, so the key ones look viable. I'm using the Seattle defense just in case Carson Wentz proves hopelessly immobile and error-prone as he was most of last season before being benched. Neither TE committee interests me. I have Michael Pittman in dynasty and am hopeful he proves to be a nice No. 1 wideout. Carson and Taylor and Hines, sure.

Jets at Panthers: Interesting that Darnold opens against his former team and replacement. Jets defense looks pretty soft, having lost some key guys to injury in the preseason (and probably being bad even before that). Nobody needs help starting McCaffrey, but I'd consider Moore and Anderson (former Jet) too. For the Jets, I'd stay well clear of the backfield. Key Index guy Corey Davis, sure, and perhaps Tyler Kroft, who had a rapport with Zach Wilson in August. No Jamison Crowder, making Elijah Moore look like the clear No. 2.

Vikings at Bengals: Sometimes I'll talk about my Survivor Pool. Comments should not be used for any actual wagers, I'm not a professional gambler. But the Vikings look like one of the better picks, being healthy and talented at some key positions while the Bengals might have Joe Burrow working his way slowly back, defense suspect, coaching staff iffy too. I should point out that in my pool you can buy back in if you lose in Week 1. So it makes sense to avoid a great team you'll want to use later in the year, in favor of a so-so team you think will win (but won't want to use later). So the Vikings, Jaguars and 49ers, below, are teams I like this week -- risky, but I think they should win.

Cardinals at Titans: I also like the Titans here. Their defense should be improved, while Arizona's looks weaker. In general I'm using offensive skill guys here, Titans passing game and Derrick Henry (are there people who sit their 1st-round picks in Week 1?). For the Cardinals, Murray and Hopkins and (for me) Edmonds, in PPR.

49ers at Lions: 49ers are my other Survivor pick, as noted. Lions look like they're kind of tanking, and the QB-WR corps combo is alarmingly bad. T.J. Hockenson should be busy, I'm interested in how the D'Andre Swift-Jamaal Williams backfield shakes out, and I expect Raheem Mostert and Trey Sermon to play in a tandem and kick butt. Wary of how the QB situation might shake out, so I'd avoid for now. Kittle, Aiyuk, Samuel, all have value, though.

Steelers at Bills: Interesting game. Bills defense looks tough and Steelers offense looks flawed. I'm using Najee Harris in PPR, but not with glowing optimism. Pittsburgh has that nice trio of receivers, but I suspect two out of three will disappoint this week (and at least one out of three in most weeks). Allen, Diggs and Beasley, and perhaps Gabriel Davis (Sanders banged up, might not play) look good. Avoiding Buffalo backfield in Week 1, let's see who's favored and then proceed.

Eagles at Falcons: This looks like a high-scoring affair. Neither defense looks good, both offenses have some talent and playmaking. Eagles though feature a confusing committee of running backs, wide receivers and tight ends and I can't get any of them too high. Jalen Hurts for the rushing staff, Ryan-Ridley-Gage-Pitts for the receiving stats, Mike Davis, sure.

Browns at Kansas City: I expect this one will be higher-scoring, and I'd be using most of the key starters. Nothing much to add to what was said in the Weekly. Players are generally healthy. OBJ might be on a pitch count and hard to believe he's on many Index teams anyway.

Packers at Saints: I don't think much of the Saints this year, but will concede I may be underestimating them. I do love Marquez Callaway and see no reason why he can't have a big year, starting here. I'm using Juwan Johnson somewhere, might essentially be their No. 3 receiver (behind Callaway and Alvin Kamara). Green Bay, Rodgers-Jones-Adams-Tonyan seems like a good group to invest in.

Broncos at Giants: I'm going to this game, the first one at MetLife in a couple of years. Expecting a defensive struggle, but with the Broncos having the better one and the better ground game. Saquon Barkley will likely play but I'd be surprised if he gets more than about half the workload. I'd hesitate before using him against a good defense until I'm sure he's healthy. No interest in the Giants passing game aside from perhaps Sterling Shepard in PPR, should catch a bunch of short passes. No Evan Engram, but NY will use both Kyle Rudolph and Kaden Smith most likely. Denver passing game, Fant-Sutton-Jeudy the main cogs but I'm expecting below-average production overall.

Dolphins at Patriots: Like most, I believe the Patriots will probably be back this year, and they'll start things out with a win. But let's give the Dolphins defense and secondary against a rookie making his NFL debut some credit; they could cause some problems. I'd use Damien Harris, Mike Gesicki and Jakobi Meyers in this one, perhaps DeVante Parker and Jaylen Waddle, with other possible receivers on both sides unavailable. Interesting matchup that should say a lot about who's going to challenge Buffalo in the AFC East.

Bears at Rams: Does it seem like the Bears get a few too many primetime games? It does to me. I feel like we've seen this specific matchup in primetime too often in recent years, actually. Whatever. Allen Robinson and David Montgomery are the only Bears I'd go within a mile of. The Rams starters look fine; I'd personally favor Darrell Henderson and the two main wideouts and Matthew Stafford, plus Tyler Higbee, but the reality that none of these guys played in the preseason is a cautionary note for me before expecting too too much. Anyway, I like the Rams, this week and this season.

Ravens at Raiders: I love TySon Williams this week and would use him as the rankings suggest. I am not certain who the No. 2 will be (the Ravens might not be either, given that whoever it is didn't have a job a week ago), and would prefer not to start or recommend those guys. Both TEs look great, Lamar Jackson should do his thing, but I'm not keen on either wide receiving corps (some hit-or-miss potential, certainly with deep threats Hollywood and Henry Ruggs, and with Marcus Peters out for the Ravens), but I'd rather skew safer in Week 1.

My heart goes out to all those for whom this day will never be anything but terrible. The victims, all those affected in ways large and small, and their families. Anything I could say wouldn't be enough, but you are not forgotten.