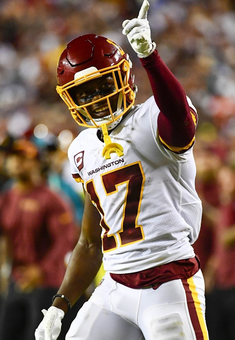 I probably said an unkind thing or two about Daniel Jones last week. Fair play to him, Jones played pretty well in this game. His runs were well-timed (unfortunate to lose a second rushing touchdown on a holding penalty that was unnecessary), he made a couple of really nice throws, and really should have had the game-clinching touchdown on Darius Slayton, but Slayton dropped it. Don't tell me it was slightly overthrown. It floated to him and hit his entire hands. Gotta be caught. If Jones can have this productive a game against a tough Washington defense, he'll have more good ones. Bad news for the Giants is that after hosting Atlanta in Week 3, they've got a mostly rough schedule for the next eight games: at New Orleans, at Dallas, L.A. Rams, at Kansas City and at Tampa Bay in five of them. Home games against Carolina and Las Vegas in the others.

Taylor Heinicke was up and down. The good is that he made a lot of strong, accurate throws, both during the game and especially under heavy pressure on the final, game-winning drive. Throwing quick darts to his receivers in a sequence that didn't look like it was going to work out. Frustrating to watch for Giants fans, especially considering they seemingly had the game won after an inexcusable Heinicke interception, and then seemingly won again after a missed field goal. Giants were offsides on it, just barely I guess; pretty tight call. But if you were overly worried about Washington pass catchers going from Ryan Fitzpatrick to Heinicke, no need. He's got some Fitzpatrick to his game, and indeed made a couple of throws I'm not sure Fitzpatrick even makes.

This was a better outing for Saquon Barkley than Week 1. Busted a longer run, had a couple of near-miss plays where he slipped down. He doesn't look like himself yet, but he got through it OK should be better in Week 3. He also played over 80 percent of the snaps, which is encouraging.

The problem is that the offensive line isn't good, it lost a starter during the game, and the avenue just doesn't seem to be there for Barkley to have any kind of big weekly performance. When I saw I was facing him last night I was kind of happy about it. It looks like most Giants rushing touchdowns will be scored by Daniel Jones; they're not going to opening holes for Barkley near the goal line. The offense doesn't seem to be making good use of him as a receiver. At what point is he going to be putting up 120-total-yard games with a touchdown? Some matchups, maybe.

Different problems for Antonio Gibson. Good running back, I was very high on him entering the season. But if it's always going to be J.D. McKissic in hurry-up situations, it will be frustrating, because that receiving production is critical. Washington doesn't look like it will be pounding in a lot of rushing scores either. That was a good Giants defensive front, but so is Buffalo next week. Ultimately it feels like Washington isn't going to work the run enough, but maybe it's too soon to be concerned. Unfortunately McKissic looked really good last night, including having the biggest play of the game down the sideline, so the 60-40 split we saw will likely crop up again.

Terry McLaurin looks like one of the game's very best wide receivers. He just abused James Bradberry last night, right up until the end where Bradberry baited Heinicke into an interception. But McLaurin was reeling in catches even with Bradberry all over him all game long. Impressive stuff. Anyone who was concerned about McLaurin being hurt by going from Fitzpatrick to Heinicke, we can put aside those fears for now.

Similarly, Sterling Shepard looks like the clear No. 1 for the Giants. Is Kenny Golladay more talented, sure. But Golladay is going to be forgotten or well-covered at times, and Jones isn't going to even attempt those throws. Shepard looks like he'll be busy every game, every series. Golladay 3 catches on 8 targets last night, Shepard 9 on 10.

Serviceable PPR outing from Adam Humphries, but hard to feel good about it. The passes generally didn't do much damage (7 for 44 yards) and I think he's more likely to finish 4-5 for 30 in upcoming games than 7-8 for 60. Nobody will look at last night's same and say, We've got to get Humphries more involved. Eventually Curtis Samuel will return (maybe), and it will be at the expense of Humphries. I think. Dyami Brown was more interesting, playing more snaps and (thought he caught only 3 passes) being close to a couple of big plays. I don't know if you can start Dyami, but he looks like a guy who will ultimately hit on some stuff in this offense. If one of these wideouts steps up with big games going forward, it should be him.

For the Giants, I don't really understand the Golladay signing any more now than when he was signed. I think they'd be fine with a Shepard-Darius Slayton (drop excepted) and Kadarius Toney mix out there. Golladay apparently had some words with Jones after missed connection or two. Yes, Kenny, you're not working with Matthew Stafford anymore. Speaking of words, Toney apparently complained after the game about not being involved. Hey, you also missed a good chunk of August, man. Yet another reason Shepard is underrated -- I've never heard him rip his quarterback, his usage, anything.

Clearly the Giants aren't going to get much out of Kyle Rudolph. Since the team didn't put Evan Engram on IR it apparently thinks he'll be back for Week 3. That will help, and if not it looks like they should use more of Kaden Smith who had the position's biggest play last night.

Logan Thomas has had a quiet start to the season. I think the problem is Washington has a few short-range targets now in addition to Thomas, including McKissic still and also Humphries. At some point they'll have Samuel back. Thomas has some downfield potential, we saw it in the preseason, it's just not sure if those plays will happen with Heinicke as they might have with Fitzpatrick. And the one that did went to second tight end Ricky Seals-Jones (who played all of 7 snaps and had only 1 target; efficient).

Yesterday morning somebody in one of my leagues cut Graham Gano in favor of Robbie Gould. This is why people hate kickers; Gano (after not attempting any field goals in Week 1) kicked 5 field goals including a pair from 50-plus, which worked out to 23.9 points in that league. From a kicker. Dustin Hopkins had my favorite quote of the year so far after missing the game-wining field goal, getting a second chance, and hitting it. "Somebody needs to check on my mother, she's probably had a heart attack."

It wasn't surprising that both defenses played the run well (aside from Daniel Jones running for 95 yards) or that Washington recorded 4 sacks. It was a little surprising that the Giants didn't come away with more than 1 sack and 1 takeaway against Heinicke, and that both teams allowed 29-30 points. A little disappointing in the case of Washington. Unlikely they'll get a ton off Buffalo in Week 3; Atlanta in Week 4 should be more rewarding.