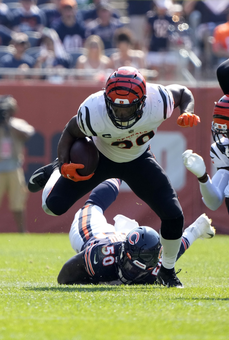 Who should fantasy teams sell high on?

ASK THE EXPERTS appears weekly from training camp through the Super Bowl with answers to a new question being posted Thursday morning. How the guest experts responded when we asked them: Which fast starter should fantasy teams sell high on?

I’d examine the Joe Mixon market. Volume is driving his early ranking — and we love bell cows, I get it — but the efficiency has been mediocre, Cincinnati’s blocking isn’t good, and the Bengals aren’t using him that much in the passing game. Joe Burrow is still taking too many hits, and if anything happens to Burrow, it’s look out below with this offense. Mixon currently ranks RB6 in half-point PPR formats; he’s outkicking his coverage somewhat. Good time to shop around.

I want to say Rob Gronkowski won’t score 34 touchdowns this season, because of course he won’t, but (a) maybe he will, and (b) there aren’t enough playable tight ends in the league to sell off the one who looks like an absolute ADP steal. So go with Damien Harris, this week especially, when Sunday’s touchdown may get more airtime than any other single play from Week 2. It isn’t that Harris can’t keep doing what he does — he’s very good at all of it — but rather that what he does isn’t the very most valuable stuff in most formats. An empty 100-yard game here, a touchdown he literally had to fight off half of a defense to score? Sure. But he still doesn’t catch passes, still may not have quite 100 percent of the early-down work, and remains a constant threat to pick up injuries along the way, judging by either his history or that very he-just-never-quits highlight that has your leaguemates drooling. You can have the guy who’ll invite half a dozen hits in the span of one play. Give me the guy who’ll take an easy chunk of yards and then slip out of bounds.

Mike Evans after his 5-74 and 2-TD performance. There are simply too many weapons for Tom Brady to use: Gronk, Chris Godwin, C. Brate, Antonio Brown, Fournette or Jones out of the backfield to name some. Evans will have good numbers this season but they will be hit or miss. You will be more likely to have benched him after two or three dud games and then he will go off and have a Top-5 performance like Week 2. Better to sell high now.

Gotta be 30-year-old Cordarrelle Patterson, on his fifth NFL team, who is currently the No. 6 fantasy running back. Patterson spent his entire career as a special teamer, gimmick, and a disappointing wide receiver. His main role in Chicago was to diminish whatever David Montgomery did. Now he's with the Falcons and their woeful offensive line and rushing offense. He'll be scraped from waiver wires this week, and then end up back there once the fantasy coach realizes that he's never consistent and tends to produce the opposite of what is expected and needed by the team that starts him.

I'm pumping the brakes on Derek Carr. I like him, but I have concerns. Yes, he has crushed it for 2 weeks, but now he has an injury concern for Week 3, plus we have all been sucked in before by Mr. September, Jon Gruden. The Raiders' fast starts have mostly turned to slow fades in recent years, and Carr has turned in some truly ugly performances when big production was needed. The jury is still out on Chucky -- he's a Hall of Fame broadcaster, but as a coach, he's only Hall of Very Good. Only Super Bowl was an inherited team from Tony Dungy. Carr's Raiders are 2-0 now, but in a division with KC's offense, LAC's talent, and Denver's defense, Carr and his Vegas mates have a long way to go to prove they're playoff worthy.

A couple of veteran wide receivers on bad teams look movable to me: Brandin Cooks and Marvin Jones. Both guys have started out with strong numbers, but it doesn't look sustainable. Maybe they get hurt (which can be said about anyone), or maybe their teams get an offer they can't refuse to ship them out to a contender (and those current No. 1s end up as 2s or 3s). With Cooks especially, we know he's going to be working with a lightly regarded rookie quarterback over the next month, which is unlikely to go well. I wouldn't give them away, but I'm not sure we'll be talking about either player as a regular starter in midseason.