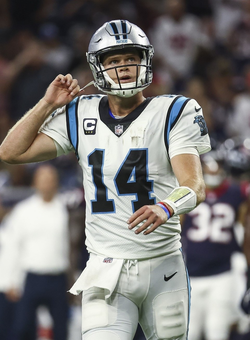 This game was both better and worse than expected. Better because it was good to see an emerging team like the Panthers take care of business against a lesser opponent and make it clear they're going to be in the playoff mix this year. Worse because we lost the No. 1 overall fantasy pick to injury early on.

Pretty strong game for Sam Darnold. Made a lot of nice, accurate downfield throws (heard something during the broadcast about 5-6 completions of over 20 yards), had a couple of nice runs (the first touchdown, and a longer run that was called back on a penalty), threw some good passes off rollouts. Just missed a long touchdown to DJ Moore late that would have really given him a great stat line. He was facing a barely there defense, to be sure, and there were a couple of early plays where he held the ball too long and had it swatted out of his hands; fortunate that Carolina was able to recover both of those fumbles. But he's identified who his star receiver is and did a nice job leading the offense after losing his best player early on. I considered acquiring Darnold in dynasty this offseason but didn't; sort of wish I had now. Based on the way things have started out, I think Carolina might decide they're fine at quarterback and not address the position in upcoming drafts.

Davis Mills also made a couple of nice throws. He delivers a decent ball and didn't look totally lost against what's clearly a tough, improved Panthers defense. Was sacked 4 times, but it could easily have been 10. Damning with faint praise, perhaps, but I didn't watch it saying, this guy has zero chance of being an NFL starter. I mean, he's no Deshaun Watson, but I've seen worse. That said, he's pretty much screwed. Not a good offensive line and no running game, so he's going to face heavy pressure and not have time to get the ball downfield even if guys are open. And he's not blessed with a difference-making receiving corps, so...

Christian McCaffrey leaving early with what's apparently a significant hamstring injury -- rare do you see a rule-out that quick -- torpedoed a lot of Week 3 and FanDuel/DraftKings lineups, including mine. We'll get more word today, but seems like a multi-week injury; hopefully not more than that. Chuba Hubbard is no McCaffrey, but he makes a strong case for the importance of protecting your top pick if there's a clear backup. I had the 1.01 in one draft this year and I think I drafted Hubbard in about the 10th round to make sure I had him -- it's worth it. Hubbard is no McCaffrey and disappointingly didn't score last night, but was close. They ran a little pass play near the goal line late, the throw was a little hot so I wouldn't call it a drop, but maybe could have been caught, then Royce Freeman got a goal-line chance that was stuffed, followed by the Panthers unwisely (in my opinion) sneaking Darnold into a pile that featured the entire Texans roster, though he did get the score (while having his helmet blasted from his shoulders). Hubbard should be about a 3/4 of the time running back for whatever games McCaffrey misses, involved as both a runner and receiver. Looked OK to me last night, and I'll be starting him next week.

The less said about Houston's backfield the better -- I'm not even going to name them all. Four players got at least 15 percent of the snaps, none even 40 percent. If you want a 30ish-year-old running back playing a third of the time on one of the league's worst teams, this is the backfield for you. None had more than 7 carries, none had more than 1 target. I'm probably going to cut David Johnson next week, and suggest you do the same if you made the mistake of rostering any of these players.

In the preseason matters department, some will recall Ian identifying in August that the Panthers had flip-flopped the roles of DJ Moore and Robby Anderson from last year, when they were oddly using Anderson on shorter routes and Moore as a downfield threat. Now it's Moore in the heavily targeted spot and Anderson in the lower-usage role, which essentially means Anderson has minimal value and Moore is going to have a big year. He was sitting at 5 catches for 76 yards late in the first quarter last night, making his final numbers a little disappointing, but there were a couple of near-misses. He got tangled up on a late route but was fine. Gotta love Moore, while conceding that some (all?) defenses will do a better job in coverage than the Texans. At this point I'd rather start Terrace Marshall than Anderson, I think.

In the latest Ask the Experts I mentioned Brandin Cooks as a player to sell high on. Thought he might struggle with Mills, or perhaps be traded elsewhere where he might not be the No. 1. Valid points, but Cooks looks like an every-week start even with Mills at quarterback, based on last night. Not a stretch to say he's the most talented player on Houston's roster by a wide margin (leaving out Deshaun Watson, as the Texans are doing). Here's a fun stat: Cooks currently has 47 percent of the team's receiving yards. I don't think that will change much going forward.

The other receivers running around the field for Houston have no value. Chris Conley has played 90 percent of the snaps in two out of three games (half in the third) and has 3 catches for 40 yards on the season. The last two weeks he's played almost full-time and caught 1 pass. It's a little hard to believe, but I guess he's a really good blocker.

Ian Thomas is playing the most snaps for Carolina but for his blocking. Dan Arnold and Tommy Tremble are the receiving options, with Arnold busier (but Tremble scoring last night on a little end-around type run). Arnold had 4 targets last night, most likely to be a desperation option, but unlikely to actually be featured.

Pharaoh Brown started out the season strong, but Jordan Akins was more involved last night. Years and coaching staffs change, but frustration trying to tap into Houston's multitude of tight ends, who they keep drafting in the middle rounds year after year, remains a constant. I have nothing to say about these player beyond the leading receiver in Week 4 might not be the leading receiver in Week 5. And none are ever going to have big weeks in this offense. Better investments than the running backs, perhaps.

Troy Aikman was going on about Joey Slye's cannon leg last night even after Slye missed an early extra point. His point is valid and the guy did make a 53-yarder last night, though on another occasion they punted rather than try one from 55. Whatever, if you're in a league deep enough to consider Houston's kicker...well, you're not.

Zane Gonzalez looks like he'll be a solid option for a Carolina team that seems likely to be a 10-win franchise this year.

People who picked up the Carolina defense should be reasonably pleased with the 4 sacks and 9 points allowed (in leagues where that matters) from them. They could easily have had more sacks and had a near-interception or two. Would have been easy for them to let down on a short week, on the road against a lightly regarded opponent, but they looked pretty solid. A top-10 defense right now. One negative: top pick corner Jaycee Horn broke his foot. That's going to crop up as an issue when they're facing someone better than Houston.

The Houston defense forced a couple of fumbles, though they didn't recover either. Sacked Darnold three times. There's some veteran pride in this group but that will probably have been beaten out of them by midseason when Houston is 1-7.

The McCaffrey injury is the big story from this game. You wonder a little if his heavy usage to this point in his career makes him more susceptible to injuries -- a couple last year, one now in Week 3. Or maybe this is just the reality of the NFL, where anyone can get hurt on any given play. To me this is exactly why if you draft an elite running back in the first round, it's worth using a late -- and not last two rounds late, but 10th-12th round in the average 16-20 round draft -- pick to protect that player. Guys get hurt, and if you drafted McCaffrey and protected that pick with Hubbard, you might still have a weekly starter. if you didn't, you're hoping your mid-round 3rd running back isn't in too crowded a committee.