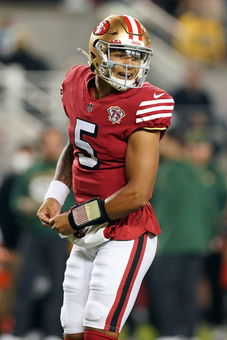 Which rookie QB will be best the rest of the way?

Lawrence versus Lance for top spot

ASK THE EXPERTS appears weekly from training camp through the Super Bowl with answers to a new question being posted Thursday morning. How the guest experts responded when we asked them: Which rookie quarterback will be best the rest of the way?

Has to be Trevor Lawrence. He has looked the best so far. Has offensive players around him that can lead him to fantasy relevance and will definitely be the starter. Whether his coach stays with the team is another matter. Least likely to impress this season is Trey Lance, because he may not be the starter and looks to be gadgety until he is the starter full time.

Trey Lance put up eye-popping fantasy numbers in a partial game when Garoppolo went down. He's an absolute must-own in all formats. His ceiling is significantly higher than the others.

To me, Trevor Lawrence seems to be coming along nicely. He can gun it downfield, and now he’s starting to work in his mobility, converting third downs with his legs at Cincinnati. I don’t think we’re far off from him developing to the point where he’s a reliable top-15 quarterback. He’s at home this week against a bad defense, and I think he’ll be pretty good in that one.

I am most interested in Trey Lance, though he may play less than the other four. The problem with Justin Fields is that he has no offensive line and questionable play calling. The problem with Zach Wilson is that he also has no offensive line and even worse receivers. Trevor Lawrence has a better O-line and receivers, but only marginally. Mac Jones has little run support, and an average O-line and receivers. But Lance plays for the 49ers, who have the best offensive line of the bunch, at least as good if not better receivers, a solid run game behind him and he is the best rusher of the group. That plays huge for a rookie quarterback. Lance is pretty raw as a passer with only one big season in college, but his ability to extend plays and pick up rushing yardage makes him more viable in fantasy football. I cannot see any of the other four first-rounders being in the top 12, therefore worthy of a fantasy start. But Lance could, in the right matchups, be worthy of starting.

Although the coaching situation in Jacksonville is a mess, Trevor Lawrence still stands head and shoulders above this class. He has good skill talent around him and has become a more proactive runner with each passing week. It's a shame Mac Jones doesn't have better talent to work with, as he's shown poise and pocket awareness. But other than Houston, New England might have the weakest set of pass-catchers in the league.

There's a safety factor with Trevor Lawrence -- he's definitely starting the rest of the way, his defense is woeful; at no point will the Jaguars be grinding out lower scoring wins or anything. Justin Fields is intriguing because I think he's going to run a ton, ultimately, although it hasn't happened yet. But I'll take a stab on Trey Lance, who has both running and deep-passing upside on a competitive team and should have some big weeks the rest of the way. Unless he really struggles, which is possible, I don't think the Niners will go back to Jimmy Garoppolo.