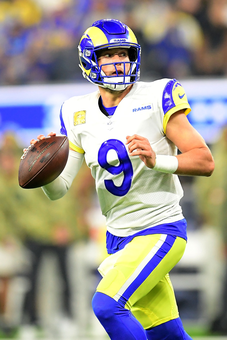 No Woods? No problem for Rams, Stafford

Suddenly, the Odell Beckham signing changes from a head scratcher to a stroke of genius. Robert Woods is out for the year, and the Rams be able to plug Beckham into that role without much dropoff.

Beckham doesn’t have the same command of the offense, and he hasn’t put in the reps with Matthew Stafford. He also probably won’t be as effective as a blocker, which could hurt the team’s running game – Woods was a strength in that regard. Beckham also has had problems staying healthy throughout his career. Typically, they like to just leave their receivers on the field for almost every play, and I’m not sure if that’s a great fit with Beckham, given his sportscar body type.

But Beckham has more speed, with a lot more ability to get downfield for big catches. And he doesn’t have to do it all on his own. Cooper Kupp is about the hottest receiver in the league right now, and they have one of the better third receivers; Van Jefferson typically logs start-type minutes, and he’ll presumably pick up some of things Woods was doing.

For ballpark purposes, I would think the LA offense shouldn’t miss Woods too much. They’ve got a well-placed bye in Week 11. Coming back after that, their offense should have had ample opportunity to work in Beckham. With the way they chuck it around, he should be a top-30 receiver in the final seven weeks of the season (perhaps top 20). He’ll catch a healthy number of balls, he’ll hit on some big plays, and they also use their wide receivers on end-arounds – he should carry the ball in most games.

Jefferson, I think, should be similar to what he’s been – perhaps a notch better. And Kupp still looks like one of the top few wide receivers in the league.

For quarterbacks, I think Matthew Stafford marches on. He’ll be one of the passing leaders for the remainder of the season, and I don’t think his dynasty outlook changes much at all. He appears to be on the front end of a prolific passing run in that offense.

I like Stafford enough that he’s one of only two quarterbacks older than 28 that I’m putting in the top 10 of my dynasty rankings. Him and Russell Wilson are both 33, and I’ve got them in my top 8. (Tom Brady and Aaron Rodgers are both great quarterbacks of course, but with those guys being 44 and almost 38 years old, I’ve got them just outside my top 10. In dynasty, I’m trying to balance the here and now against the value of what’s coming in future years.

I turn my attention to dynasty leagues each Saturday, rotating between the four premium positions. Rankings assume PPR scoring, and work under the premise that it’s a 12-team league, with each carrying about three quarterbacks and keeping players indefinitely.