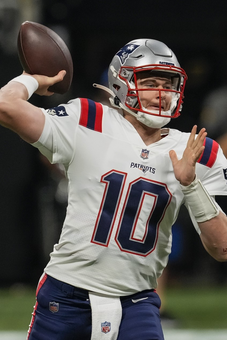 There's a new clubhouse leader for worst game of the season. It was maybe OK if you're a Patriots fan, or if you happened to start only two players (Patriots Defense and Nick Folk, which you indeed should have been). But compelling football and big numbers by skill players, well...

For Mac Jones, it was a mostly crisp, efficient day of him making the right reads and hitting open receivers. He's remarkably immobile for a young guy, calling to mind late-career Philip Rivers with his footwork, which factored into him taking 3 sacks. He also forced a pass over the middle to a well-covered Jonnu Smith for an interception when it was still a game, as much as a game with one team getting shut out can be said to be a game. But he moved the offense into range for 4 field goals and a touchdown, and that was more than enough on this night. Most will recall that Tom Brady wasn't a good fantasy option early in his career, either, so there's still plenty of time for him to move into the range of being a guy you actually want to start. But Bill Belichick and Pats fans have no reason to complain.

Aside: Jones taking 3 sacks and throwing an interception against a very inopportunistic Falcons defense isn't a great sign for the offense with the Titans and Bills coming up over the next few games. You know Belichick is thinking about this a little, he'll let Jones know about it.

Matt Ryan...well, this was bad. Obviously he's affected by first losing Calvin Ridley and then losing his 2021 star, Cordarrelle Patterson. And then he got his ankle banged up on a first-half sack that further compromised his non-existent mobility, and might have contributed to a floater for an interception. Lesser receiving corps, questionable line, no running game to speak of, old and hurt -- yeah that about covers it. We ranked Ryan 30th in the Weekly, and note that two quarterbacks are on bye so he couldn't have been worse than those guys (although Ryan probably finished with negative points in some scoring systems). Enough said.

After Ryan was benched in the waning moments, we got to see 3 snaps from Josh Rosen and 1 from Feleipe Franks. They combined for 2 interceptions, a truly remarkable interception-to-snap ratio of 50 percent, with one going for a touchdown. That one, Rosen threw directly into a linebacker's stomach. Hope you started, but were not facing, the Patriots defense.

So sometimes a perfect matchup and game script don't yield great fantasy choices. New England didn't have a rushing touchdown, didn't throw much to its running backs while playing from ahead the whole way (and spread 4 targets and 4 receptions among three different players), and most dauntingly played Damien Harris 25 snaps, Rhamondre Stevenson 22 snaps, and Brandon Bolden 17. So while Najee Harris, as a for instance, might have had 126 rushing yards while also catching 4 passes for 30 yards, the Patriots had those wonderful numbers split among three different players. Until one of these backs gets hurt or loses a fumble, that's probably what we're going to get the rest of the way. A rushing touchdown or two, which certainly could have occurred, would have made it all more palatable, but there was a sack and a short-yardage stop in there which led to field goals instead. Stevenson had the tandem's best run, but it was correctly called back on a holding penalty.

In the Weekly we speculated that Wayne Gallman might see an increased role after running it effectively in the last game. But on Wednesday afternoon, in a really unusual admission by a coaching staff, the Falcons said that Gallman's increased workload was due to the blowout loss and short week before a Thursday game. Just strange that a team would say Oh, no, don't make the mistake of thinking we believe Gallman is any good, we just needed to burn a few carries without risking Mike Davis getting tired or hurt. We didn't rank either back in the top 40 anyway, and it's a good thing since they combined for 4 carries for minus-2 yards, with fullback Keith Smith getting more work (for some reason).

Atlanta's leading running back was instead Qadree Ollison, promoted off the practice squad to carry 9 time for 34 yards -- his only work of the season. He also caught 2 passes for zero yards, a perfect Ollison stat line. Considering Davis averages 3.2 yards per attempt and the team went out of its way to say Gallman's role is to help run out the clock in one-sided defeats, perhaps Ollison will see some expanded work down the stretch. But presumably Cordarrelle Patterson will be back next week and Ollison can be left on the waiver wires. Atlanta's not going to be playing with a lot of leads or punching in many rushing touchdowns going forward.

Nelson Agholor, Kendrick Bourne and Jakobi Meyers each caught 4-5 passes for 39-42 yards on 4-6 targets, but Agholor was left wide open for an early touchdown, so naturally the wideout 3rd-most likely to be started finished with the best numbers. Game script worked against any of these receivers having great production, things should be better in upcoming games. New England's next four are against the Titans, Colts and Bills (twice) and all of those teams have more going for them on offense than Atlanta at this point.

I went with Russell Gage in a one-game FanDuel competition last night, and from a fantasy perspective he was the best Falcon to use, catching 5 balls for 49 yards. But it's a measure of just how terrible this offense is these days, or is without Ridley and Patterson, that Gage-Olamide Zaccheaus-Tajae Sharpe are the trio Ryan is looking for at wideout. There's some nominal PPR value in deeper leagues, but as we've seen over the last month or so, sometimes it will be Sharpe or Zaccheaus stepping up.

Kyle Pitts hasn't set the world afire, but he's actually the No. 3 fantasy tight end -- only Travis Kelce and Mark Andrews have more points than he does. Tough position this year. But Pitts is going to go on to have a great career, assuming Atlanta puts other stuff around him. Disturbing, from a Falcons fan perspective, to consider he might be literally this team's only building block right now. What other player on this offense will be around two years from now?

Hunter Henry has been having a nice year, but because Bill Belichick hates you and your fantasy team, Jonnu Smith showed up to steal a couple of targets and a 17-yard catch. But a good year for Henry and he might be the team's best receiver the rest of the way.

Great game, as noted, for Nick Folk and the Pats defense. Not so much for Younghoe Koo, who had a 45-yard field goal wiped out by a silly penalty, then missed the ensuing 50-yard field goal by inches. But no one should have been starting Koo, even in a start-two-kicker league, should such things exist.

Going forward, the Falcons have some favorable matchups coming up (including Jacksonville next week), but hard to get excited about using anyone here aside from maybe Patterson. And you wonder if Ryan might need to miss a game. Patriots have some tougher matchups, but would anyone be surprised if they beat the Bills twice in the upcoming games? Definitely a playoff team. Again.