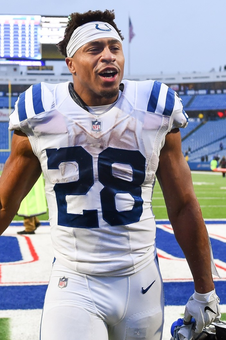 Feels like a more unpredictable year than most. Maybe we say that every year after a few predictions go awry, but each week is bringing us a new, crazy example. Chargers-Steelers calling to mind a Fouts-Bradshaw shootout? Jonathan Taylor hanging 50 points on the league's top defense? Tennessee losing at home to Houston. That kind of year.

Colts at Bills: It's been clear all year that the Colts are pretty good; they just lost a couple of close ones early. So them coming out and beating the Bills up and down the field on both sides of the ball, while surprising, shouldn't be a complete stunner. Although it kind of is. Monster game for Jonathan Taylor, which didn't leave much for anyone else unfortunately. Buffalo just looked totally out of sync for most of the game, with Josh Allen throwing multiple picks and having another overturned. Bad week to start Tyler Bass, too, who hit the upright on a long field goal, missed another one, and then had his team go for 2 rather than even give him the junk extra point late.

Football Team at Panthers: You have to root for Taylor Heinicke, right? He had himself a game, making plays throughout against a defense that had played pretty well all year but didn't today. Nice week for Terry McLaurin. For Carolina, it was a strong game for Cam Newton; he played throughout and delivered good numbers to Christian McCaffrey (a pretty sweet touchdown reception on a play that not a lot of running backs make) and DJ Moore; even Robby Anderson caught 5 balls. This game was lost by the Carolina defense not making enough plays, and Heinicke making more.

Ravens at Bears: This one put the U in ugly, with neither offense doing anything for most of the game. The Bears have made a habit of this and the Ravens didn't have Lamar Jackson or Marquise Brown, so not a great shock. Justin Fields was knocked out of the game, leading to Andy Dalton coming in and making some big plays late, including finding wide-open Darnell Mooney and Marquise Goodwin for long touchdowns. But as they so often do, the Ravens managed to pull a win out of nowhere, with Tyler Huntley hitting on a big play late (to Sammy Watkins, of all people) and engineering the winning touchdown drive. Bears lose another heartbreaker, which the Ravens have dished out 4-5 times to teams this year. Good game for Mark Andrews, not Rashod Bateman. When in doubt with a lesser quarterback, good tight end games tend to materialize more often.

Lions at Browns: Hard to have much faith in the Browns. They've won some games, and played well at times. But they got really smoked by the Patriots, and in this one barely beat the Lions, and it wasn't (to my eyes) a case of how gritty and tough the Lions under Dan Campbell are, although they are. It was more a case of the Browns just doing dumb things on offense and defense, including some poor throws and decisions by Baker Mayfield. (Who's playing through multiple injuries, I get it, so I'll cut him a little slack.) Browns win, hooray, but not a pretty game. D'Andre Swift had a breakaway touchdown run and T.J. Hockenson caught 6 passes, so the only guys you should have been starting got theirs. And fair to say Detroit might have actually won this game with Jared Goff healthy, which says a lot about Tim Boyle's struggles.

49ers at Jaguars: So 49ers win in a blowout, no surprise there. The surprise is that Jeff Wilson severely disappointed, carrying 19 times for just 50 yards and not scoring. So two things. One, on San Francisco's opening drive he carried twice near the goal line and was barely stopped, with the team setting for a chip shot field goal rather than trying to convert a 4th and 1 he definitely would have picked up. Worse, he was wide, wide open for a touchdown catch, and Jimmy Garoppolo missed him. Easiest throw in the world. But whatever. Wilson's came could/should have been better. I regret the outcome, not the decision to start him. Other negative was Deebo Samuel getting a lot of backfield work (well, great for those of us with Samuel) and Trey Sermon getting some work late, albeit not with distinction. Jacksonville's pass defense worse than its run defense. Garbage-time score for James Robinson, always nice if you've got him.

Packers at Vikings: A 34-31 final score, although it really wasn't a slugfest throughout. Game was 24-23 late, but both teams hit big plays, with Justin Jefferson having a monster game and Aaron Rodgers and Davante Adams doing their thing, followed by Rodgers hitting Marquez Valdes-Scantling for one of his patented once-a-month big-play touchdowns. Minnesota got the ball back with 2 minutes left and it looked for all the world like he'd thrown a boneheaded pick on a deep ball to lose the game. But it was overturned by replay, and the Vikings were able to continue their drive down to a chipshot field goal that was a little closer than perhaps it should have been. Entertaining game, especially in the fourth quarter. AJ Dillon didn't have a huge game rushing it but saved his week with a good receiving game. Pretty awesome TD throw by Rodgers to Josiah Deguara, although few probably started him.

Dolphins at Jets: Most embarrassing part of this game for me was watching Mack Hollins catch a long touchdown and celebrating because I initially thought it was Mike Gesicki. What can I say, they have similarities. Gesicki at least was OK, Myles Gaskin was good, and Jaylen Waddle scored. Not a great game for Michael Carter, though he had a play that ended in the end zone ruled just short; unlucky. Joe Flacco was fine, it's a little disturbing to hear a pregame report suggesting something along the lines of Zach Wilson's confidence being shot. Huge game for Elijah Moore and a touchdown for Jamison Crowder, with the result being the Jets receiver started most often, Corey Davis, disappointed. I guess going forward we need to be starting Moore rather than Davis, even if we're a week too late.

Saints at Eagles: Is it too soon to say the season might be over for the Saints? This was a rough game, with Jalen Hurts moving the ball up and down the field against their defense, and even throwing a couple of touchdowns (to Goedert and DeVonta Smith) that were taken away by a penalty and by Smith being just out of bounds. Big showing by the Eagles offense, which I've clearly underestimated at times, and an even worse one for New Orleans than the final numbers suggested, with a lot of Trevor Siemian's work coming in garbage time. His 2 picks included a really bad Pick Six. New Orleans defense didn't play well, but it was stuck in a lot of bad situations, too. And I'm starting to think Philadelphia can win playoff games with Jalen Hurts. I wonder if the Eagles agree.

Texans at Titans: Why is it that the Titans have weeks like this one? While beating some of the league's best teams in their 8 wins, they've also lost to probably the league's two worst teams. And this one was convincing; a good team would have beat them down the way the Cardinals did in Week 1. Obviously Ryan Tannehill throwing 4 interceptions, and the team muffing a punt near its own goal-line; those things tend to kill any semblance of momentum. But it was just really surprising that such a good team most weeks played so badly. Naturally the running game did absolutely nothing, unless you count Dontrell Hilliard coming out of nowhere to catch 8 passes. A.J. Brown caught 5 passes and left early with a chest injury. Houston potentially hurting its draft position, but they can enjoy the week. And we can all talk about two memorable running back stat lines from one team in one game: 13 carries for 18 yards for David Johnson, and 18 carries for 40 yards for Rex Burkhead. Both rushing TDs by Tyrod Taylor, of course.

Bengals at Raiders: Cincinnati's offense didn't do quite as much as I was expecting early on, struggling to protect Joe Burrow at times. But then Joe Mixon started hitting some runs, Burrow started making some throws, and the Raiders started losing interest in things, it seemed. Obviously they're thin at receiver, and maybe the various distractions of the season have caught up to them (it seems to happen to this team a lot in recent years, really). Big win for the Bengals, who I'm quietly pulling for in the AFC North.

Cowboys at Kansas City: On Saturday I called this the Game of the Week. On Monday I'm calling it one of the more frustrating games I've seen in a while, with two of the league's elite quarterbacks (and all those of us who started them) being let down by ugly drops, lousy blocking, and generally bad football throughout. If you like to see Dak Prescott get sacked, not run the ball, and have every shred of momentum killed by a drop or some sort of miscue, this was the game for you. If you like seeing Patrick Mahomes misfire to everyone except on 7-8 yards throws, all the better. No touchdown passes in this game, and not much in the way of fantasy goodness. At least Prescott had an excuse, with Amari Cooper inactive and CeeDee Lamb suffering a concussion. Mahomes had his full complement of starters and still led his team to just 19 points. Cedrick Wilson, not looking good as a No. 2. Frustrating game.

Cardinals at Seahawks: If this isn't the end of the Russell Wilson era in Seattle, a fair question would be Why? He looks like he doesn't want to be there, there's long been a disconnect with the coaching staff, and the team itself seems to be going through the motions. This game was close late due to Matt Prater shanking a couple of 30-something field goals, but Arizona could easily have won this game by 20 even with several of its best players sidelined. DeeJay Dallas only played special teams a week ago but got to score a late touchdown here, a shining example of week-to-week coaching maneuvers that surprise even them. Arizona is back in good shape for the top seed in the NFL and finally gets its bye to get some players healthier.

Steelers at Chargers: I clearly underestimated just how much the Steelers defense would be affected by being without T.J. Watt and Minkah Fitzpatrick. Not that Justin Herbert going all Lamar Jackson on the Steelers could have been foreseen, necessarily, or Ben Roethlisberger turning back the clock with a huge performance of his own. Modest numbers by Najee Harris against the league's worst run defense...also surprising, although clearly the Chargers came into this determined to make Ben beat them (and he almost did). Hopefully if you were facing Austin Ekeler, you had Jonathan Taylor on your side. I had a 50-point lead but was facing Herbert, Ekeler and Keenan Allen. Ninety-five points later, I got blown out.

Monday, Monday: I give up predicting what might come in this one. Surely all the huge performances are out of this week's system, right? Giants D should come to play and maybe make things a little tougher on Tom Brady and company. Saquon Barkley is expected to play, and his all-around potential is good, unless the team eases him back in. How about picking an upset on a week/month of them? Giants 27, Bucs 24.