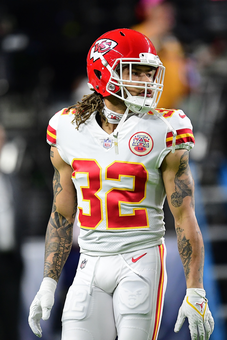 Kansas City was seemingly out of it a few weeks ago – looking like a team that would be playing on the road as a wild-card team. Now they’re looking about as likely as any team to win the AFC. And it’s been their defense, surprisingly, that’s led the way.

Kansas City looked like a disaster defensively early in the year, giving up a ton of rushing yards against Cleveland and Baltimore, and with not enough ability to stop the Chargers in a home loss. But they’ve got a lot of those issues resolve, making them formidable again (even if they haven’t ironed out all of the problems on offense).

Kansas City in its first five games allowed an average of 32.6 points. In its last five games, it’s allowed fewer than half as many points.

One of the other AFC powers, on the other hand, has gone the opposite direction. Buffalo’s defense allowed only 13 points per week in its first five games, but it was steamrolled by Indianapolis on Sunday.

Consider the following stat charts. They show how each defense has performed in its first five games versus its last five. All teams at this point have played at least 10 games (for the ones that have played 11 games, the middle game of the 11 is discarded – we’re looking at five-game blocks for each team).

Teams with the most improved defenses: KC, Miami, Green Bay and Washington.

Teams with defenses that have declined the most: Jets, Bills, Bears, Saints.

Looking only at pass defenses, the Bucs, Cowboys and KC have had the most improved defenses. The Jets, Raiders and Vikings have slipped the most.

This one gets a little convoluted (with there being 5 stat columns), so let me walk you through what you’re looking at:

The final column (“Diff”) sshows the percentage change, using fantasy scoring assuming 1 point for every 10 yards and 6 points for every TD pass. (I didn’t list the fantasy point averages because the table was already complex enough as is with five different numbers for 32 teams).

While we’re at it, we may as well also roll through the numbers for run defense. KC, Miami and Jacksonville have had the most improved run defenses, while Tampa Bay, Buffalo and Pittsburgh have all slipped the most (using standard fantasy scoring, those three teams have allowed over twice as much production).

As with the passing chart, it gets a little complicated: