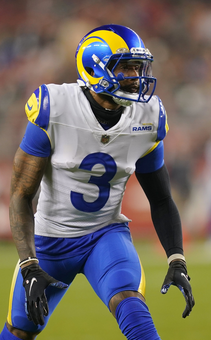 Can Odell Beckham get back to being an elite, top-level receiver? He got off to an ominous start on Monday night, catching 2 passes for 18 yards, with a forced long ball on the first possession resulting in a tone-setting interception.

Beckham had limited practice reps, of course, and he didn’t even play all that much – just 15 plays. On this front, the Rams get their bye week at the perfect time. It will give him an extra week to study the playbook and get some practice reps with Matthew Stafford. Not that they’ll have everything worked out; it takes months or even years to really build a top-level rapport. Consider Antonio Brown, who’s averaging 2 more yards per pass target this year, now that he’s had some time to work with Tom Brady.

I don’t think it’s realistic to expect Beckham to do all of the good things they were getting out of Robert Woods. Woods has been in the Sean McVay offense since the beginning, and he’s a tough, trusty pro.

They might, however, get more big plays out Beckham. He’s a little faster and more athletic than Woods.

That’s the theory, anyway. Beckham hasn’t actually shown much on the field in recent years. They could never get him going in Cleveland, where he suffered a torn ACL and at times didn’t want to work out with the team in the offseason.

In this last 16 full games in Cleveland (and old season’s worth of action) Beckham caught 57 passes for 781 yards and 5 TDs.

The buzz with Beckham comes from what he did in his first two seasons, when he looked like he was going to be one of the league’s great receivers – a Randy Moss kind of guy. He had the unbelievable touchdown catch against the Cowboys, where he seemingly caught the ball with 2 fingers. If you look at the 20 games starting with that Sunday night game, he caught 151 passes for 2,238 yards and 22 TDs, stats that Moss or Jerry Rice would be proud of. If we want to stick with 16-game chunks, I see one in there where he caught 117 passes for 1,796 yards and 18 TDs.

But those All-World numbers came from back in 2014-15, and that’s a galaxy away for NFL purposes. Josh Gordon was also a remarkable receiver at that time. Years go by, and players change.

For me, if you’ve got Beckham, you’re hoping he can kind of be another Robert Woods, with probably fewer catches but maybe more big plays. But I’m not super confident that will happen. I wouldn’t surprise me at all if Van Jefferson in December finishes with better numbers than Beckham. I consider Beckham to be much closer to Jefferson than to Cooper Kupp.