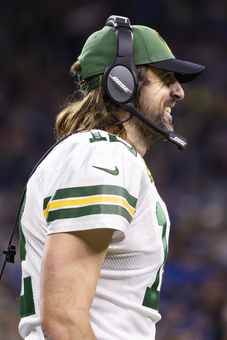 Who should be the top pick in a playoff fantasy league?

ASK THE EXPERTS appears weekly from training camp through the Super Bowl with answers to a new question being posted Thursday morning. How the guest experts responded when we asked them: Who should be the top pick in a playoff fantasy league?

The challenge in picking a player that goes all the way to the Super Bowl is that the Wild Card round is full of visitors that win in each round, even though invariably all the home teams are favored. The safest play is Aaron Rodgers playing at home and the most likely to reach the Super Bowl. Davante Adams runs a close second but this year there are not as dominant teams and upsets happen so often as to be almost expected. Next to Rodgers, Patrick Mahomes gets that extra game from playing in the Wild Card Round but is home until Conference Championships, assuming the Titans make it that far.

Quarterbacks typically score more than other offensive players. In the NFC, Rodgers and Brady cancel each other out as only one can advance to the Super Bowl, plus Rodgers has a bye Week 1. Add in Stafford, Murray, and Dak, and that is one crowded QB conference. In the AFC, Patrick Mahomes has the clearest path to the Super Bowl as he's the best QB left standing. Burrow is in his first NFL playoff so he and the young Bengals may be a bit tight. Josh Allen has had consistency issues, plus has a very tough matchup with New England in predicted frigid weather. Kansas City didn't earn the bye, so they get to play the crappy Steelers (again) in KC, so that's additional points available for Mahomes. The KC running game is average at best, so give me "just another sneakerhead" Mahomes at the Patrick rate for the fantasy playoffs.

Davante Adams. Why? The Packers are the team most likely to make the Big Game and all their playoff games before the Super Bowl will be played at home. Target hog = Big Fantasy Points!

I received the No. 1 overall pick in a six-team draft today and the first thing I tried to do (unsuccessfully) was trade down. I don't see a big difference between the top four picks I was considering. Ultimately I went with Tom Brady, feeling he'll play two home games at least, he'll be heavily favored in the first game, and he has stackable teammates which you can draft later (and I did). And if things fall Tampa Bay's way, I might get four games. Playoff success is all about bankrolling 2-3 teams, making sure you have at least one front in each conference. I shied away from Aaron Rodgers because I knew Davante Adams wouldn't get back to me and other Packers receivers are less exciting, and I wasn't sure I could get enough Kansas City stuff to make Patrick Mahomes work in my slot. But if you wanted to start a playoff draft with Rodgers, Mahomes, Josh Allen, or Brady, I wouldn't passionately oppose you. It's been a wide-open year.

Patrick Mahomes, I think. It’s my belief that the Packers will win the thing. They’re definitely the safest choice to be there. So Aaron Rodgers will be playing in three games and putting up good numbers. He’s the safe choice. But Green Bay has a bye, which caps Rodgers at three games. I’m of the school of thought that there’s no way the No. 1 seed on the AFC side (Tennessee) is making it to the Super Bowl. So there will be a quarterback from that conference that will play in four games — Mahomes, Allen or Burrow, most likely. Any one of those guys in four games will finish with more overall production than Rodgers will manage in three. So while Rodgers in the safe pick, I will go more aggressive and try to latch onto that four-game quarterback — Mahomes (even though he came in below expectations in the regular season).

Travis Kelce should be the first player taken for two reasons. First, he's so far ahead of his position that I bet you can't even name the next-best playoff tight end. Second, Kansas City has the most viable pathway to a four-game playoff schedule.

With only two teams getting byes nowadays, the odds of one team playing in four games are way up. Since I don't think anyone outside of Tennessee thinks the Titans are going to the Super Bowl, it seems pretty likely an AFC team will do it. Mahomes, Allen, Burrow would then be the best candidates. Of those guys, Burrow is the longest shot (will the Bengals be just "happy to be there"?), while Allen is the most likely to be affected by weather, especially this week -- no way will Bills-Patriots be a shootout in 5-degree temperatures. So I guess it's Mahomes, or perhaps Travis Kelce if a TE is required (but quarterbacks usually score the most points). If you're a believer in Tom Brady overcoming all odds and team injuries to get back to yet another Super Bowl, and I can't fault anyone who feels that way, I guess he's also a fine choice.