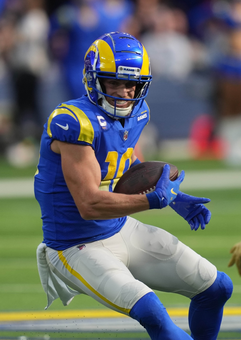 Chris Liss of Rotowire is the overall winner of our 2021 Experts Poll competition, putting together a series of draft lists that graded out the highest of a 20-man field.

This kind of competition isn’t won with one selection. It’s a complex contest, with 20 industry analysts each submitting lists of 120 players – a top 20 at each position. But Cooper Kupp was Liss’ most important selection. Liss ranked him 13th among wide receivers, higher than anyone else. Of the 19 other contestants, all but two ranked Kupp lower than his teammate, Robert Woods (who didn’t even make Liss’ board), a decision that was magnified further when Woods missed half the season.

With his key handling of the LA receivers, Liss blew out everyone at that position. He also won at tight end, where he didn’t have a Kupp-like grand slam but hit on a series of picks. He was the only expert who didn’t put Robert Tonyan in his top 20; Tonyan came in about 10th on most entries but underperformed and then missed most of the season. And Liss was higher than the vast majority on Rob Gronkowski (9th), Hunter Henry (10th) and Gerald Everett (16th), helping to add value to his score.

Using our complex scoring scoring, we take the production of each player (PPR scoring) and multiply those points against where the player was ranked. The higher you rank a player, the more he counts towards your score.

Liss, who writes for Rotowire and hosts a show on Sirius XM, also won this competition five years ago.

Michael Nazarek of Fantasy Football Mastermind finished 2nd. He impressively finished in the top 8 in all six categories, including winning the QB position and placing 3rd at wide receiver.

Bob Henry of Footballguys.com took 3rd. He was a medalist at all three of the most coveted positions – 1st at running back, 2nd at wide receiver and 3rd at quarterback.

Jody Smith of FantasyData finished 4th overall, while Robert Heater of Gaithersburg, Md., placed 5th. Heater isn’t a professional analyst but instead won his way into the competition by winning the 2020 Fantasy Index Open. (We are just putting the final touches on the scores for the 2021 Fantasy Index Open – they’ll be announced soon.)

Injuries are key in this kind of a competition, of course. No waiver moves or trades are allowed – every player is scored for every game – so when a player misses most of the season, it can really torpedo a draft list. Think Michael Thomas, Cam Akers, J.K. Dobbins, Irv Smith and Calvin Ridley. Those guys dragged down the experts who were higher on them than the rest of the field. In this kind of scoring format, the picks that go totally wrong can count more statistically than the ones that go right. So when you see an analyst ranking 19th or 20th at a position, keep in mind that there’s a luck/chance element involved. Ranking Dobbins as a top-15 pick can be debated; nobody truly knows what kind of numbers he would have put up had he stayed healthy.

To try to reduce the impact of injuries, we also like to see how things would grade out after setting a floor at each position. That is, we assume that if you selected Cam Akers or Michael Thomas with a third-round pick, you wouldn’t continue to start him all year, taking zeros; in a typical fantasy league, you would replace him with a waiver wire choice who would give you some nominal (perhaps serviceable) production.

In the “floor” scoring system, we assume that through waiver moves or trades, your team would finish with production equivalent to the best non-starter at each position. So that floor (or baseline) is set at 13th at quarterback, tight end, kicker and defense. That’s the worst you can do, and then we give credit for picking players who do better than that level.

Using such a scoring system, the same names appear at the top. Liss is still the winner, Henry moves up to 2nd, and Nazarek finishes 4th. Reader Robert Heater (who won his way into the Experts Poll by winning the 2020 Fantasy Index Open) finished in 3rd in this scoring system and 5th in the standard (official scoring).

Cory Bonini and Tom Brolley were the experts who would be most helped by this scoring change. Bonini finished in the bottom 5 in the official scoring format, but he moved up to top 5 using this adjusted scoring. Brolley moves up from 18th to 7th.

I also scored these picks using a third scoring system this year – what I’m calling “per-game hybrid scoring”. It’s another attempt to reduce the impact of injuries and COVID.

In this scoring system, I used per-game production of all players who played over half of the season – guys who played at least nine games. And I also used a floor.

In this one, I arbitrarily decided the worst anyone could do was 21st at the QB, TE, K and Def positions. So at those positions, credit was given only for production beyond what you would have gotten for the 21st player. There’s no additional penalty for players ranking 33rd or 53rd or 83rd – 21st is the worst you can do (again, assuming you would use waiver moves to help along your team).

Fantasy teams tend to start more running backs and wide receivers, so pushed the floor on those positions out to 31st at running back and 41st at wide receiver. Admittedly, these are numbers I’m just pulling out of thin air, but with the stats in front of me, they seem right. If you score only wide receivers who finished in the top 20, there are too many good ones in the 20s and 30s who were solid players, and I wanted the ordering for those guys to be factored in.

With this alternated scoring system, the same names tend to float to the top. Henry comes out on top in this format, just ahead of Liss and Nazarek, with Heater in 4th. And Jody Smith is again in the top group. He ranked 4th, 6th and 5th in the three scoring systems.

As with the other injury-adjusted system, Bonini and Brolley were the two who would be helped most, relatively to our official scoring. (They each would move up 8-9 spots.