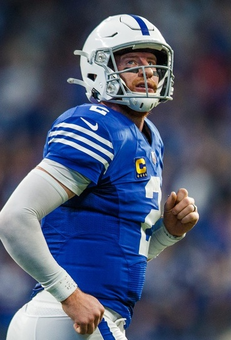 Colts ready to move on from Wentz

Carson Wentz, if reports are accurate, isn’t going to get a second season with the Colts. They’ve seen enough to conclude that he’s not the quarterback they’re looking for.

By some metrics, Wentz had a decent season. After being sidelined for the entire preseason, he rallied to get to get ready for their opener, then went 9-8 as a starter, with 20 more touchdowns (27) than interceptions (7). Wentz finished with that same 27-7 ratio of touchdowns to interceptions in his next-to-last season with the Eagles.

But Wentz didn’t do enough to elevate the offense. In too many of their games, he was just along for the ride, with the Colts emphasizing Jonathan Taylor and the running game. The AFC is overstocked right now with great quarterbacks – Mahomes, Herbert, Burrow, Allen, Lamar Jackson. For a team to make it to a Super Bowl, it would need to get more from its quarterback, and the Colts seem to realize as much.

Wentz threw a left-handed Pick Six out of his end zone against the Titans, then gave that game away in overtime with another ill-advised interception. He got particularly bad late in the year, coming up small in late-season losses against the Raiders and Jaguars. Had the Colts won either of those games, they would have been in the playoffs.

Wentz isn’t vaccinated, which annoyed owner Jim Irsay. That became a bigger factor after the Week 17 loss against the Raiders, when Wentz wasn’t able to practice all week, then played poorly. It’s reasonable to wonder if a vaccinated Wentz would have been able to practice, with the Colts then winning that game.

Wentz in his last season in Philadelphia was a disaster, with 50 sacks and 15 interceptions in 12 games before they benched him. Frank Reich was able to draw a more quarterback-friendly offense, dialing him down to 32 sacks and 7 picks in 17 games, but he’s looking like a lesser, place-holder type quarterback.

The Colts are looking around, seeing if they can find a team willing to take Wentz and some of his contract off his hands. Indianapolis has a contender-type team in place; they just need a quarterback who can help get them over the hump.

Stats for the second half of the season (Weeks 10-18) are below. Wentz in those final eight games completed only 61 percent of his passes and averaged only 171 yards, with 10 TDs and 4 interceptions.