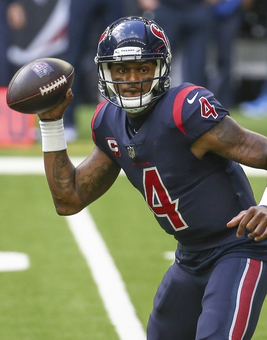 Deshaun Watson has made his choice between the Atlanta Falcons and New Orleans Saints by unexpectedly pivoting to Door No. 3. He's going to Cleveland, and it's almost certainly about the money -- a fully guaranteed $230 million contract. In fantasy terms, it's good for some, not so good for others.

Certainly, you have to be excited about what this means for Cleveland's top pass catchers, Amari Cooper and David Njoku. Going from Baker Mayfield, who in his career has averaged 235 passing yards, and 23 TD passes per season, to Watson, who's averaged 34 more yards per game and thrown 26-33 touchdowns in his three full seasons as a starter, is a sizable upgrade. Donovan Peoples-Jones could be a breakout receiver, and running lanes should be clearer for Nick Chubb and Kareem Hunt. Baker Mayfield's biggest fans (Progressive? His Mom?) wouldn't dispute that.

But for Watson himself and fantasy football in general, it's hard to be thrilled about his landing spot. I was hoping for the Falcons or the Saints, which have a much better track record of delivering strong, prolific passing games. Yes, they've had elite quarterbacks, which is the main factor. But they also play more than half of their games in climate-controlled domes each season, and additional contests in Florida or other southern venues. The Browns had about a month-long stretch of games two years ago where passing the ball was nearly impossible, due to windy conditions. That included a 10-7 eyesore against Watson and the Texans where the teams combined for 295 passing yards.

So it requires something of a leap of faith to imagine that Watson is going to be running a high-powered passing offense that Cleveland hasn't seen in forever. Since returning to the league in 1999, the Browns have ranked in the top 15 in passing three times in 23 years. They've finished in the top 10 just once. Blame the quarterbacks, which have mostly been awful, sure, but you still kind of want to see it happen before promising it. I would have preferred to see Watson playing in a dome in a less defense-oriented (and winter weather-influenced) division.

Over the past decade, the Falcons and Saints have had, on average, two of the top 3 passing offenses in the league. The Browns have lived in the bottom 10. Matt Ryan and Drew Brees versus what Cleveland has slopped out there is most of that. But let's also include weather, schedule, offensive philosophy and top to bottom personnel, too.

There are some other issues to be thinking about, of course. Watson will still face a league suspension of some kind, that's for certain. Fewer than 6 games would be surprising. You wonder a little if the way things have worked out for Watson -- pretty great, if you consider that a little over a year ago he was trying to force his way out of Houston, and this weekend he'll sign the largest, fully-guaranteed contract in NFL history -- will impact how he reacts if things go sour in Cleveland. A year or two from now, will he be saying, "Actually, I think I'd like to play in Atlanta. Make it happen."

In any case, Cleveland wins the Watson sweepstakes. Someone else will soon be announcing Baker Mayfield as their starter. And the NFL rolls on.