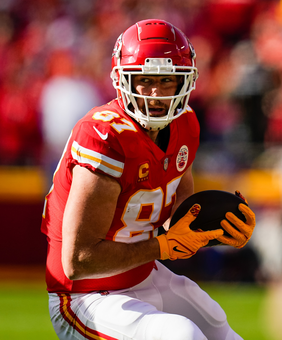 Can Kelce keep it going for another season?

With Kansas City, not only did it trade away Tyreek Hill. It also has an older tight end. Travis Kelce will be 33 in October, making it fair to wonder how long he can operate at a difference-making level.

There were times last year that I thought he had dipped some. During one 10-game stretch, he caught only 53 passes for 586 yards and 2 TDs. Good for a lot of tight ends, but not up there on the uber-awesome level. Most of his stats were down last year – catches, yards, yards per catch and completion rate.

Kelce rebounded nicely, of course, playing about as well as he ever has in their closing games. he averaged 7 catches for 92 yards in his final six games, with 7 TDs. He and Patrick Mahomes pulled off the key completion to tie the Buffalo playoff game at the end.

But if Kelce declines, which seems possible, KC could fall apart in a hurry.

For each guy, I tossed the initial seasons, starting the meter after they’d become a top-10 tight end for the first time. Then I’ve got them ranked best to worst. For the seasons authored by tight ends who are at least 33 years old (at the end of the year), the players are tagged with black dots.

This group has combined to finish with top-5 numbers 46 times. All but seven of those seasons were by players who were under 33 years old (including all 16 of the No. 1 seasons).

For the 26 seasons where these tight ends didn’t finish with top-8 numbers, 16 of those were by players who were at least 33.

With there being statistical inflation over the years, I sorted the guys not by their fantasy points (PPR scoring) but first by their rank among tight ends in their particular season – the thinking being that 180 points in 1998 is more value than 220 points for a tight end today. After the ranking number, then I went to straight production.

Kelce probably will be my top tight end, but I’m not expecting his numbers to zoom up with Hill gone. If I’m a KC fan, my hope instead would be that he can hang on, producing at something close to what we saw last year.