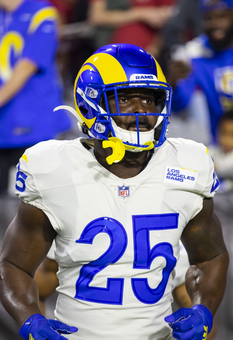 Let me dip back into Sony Michel, whom we discussed some yesterday, because additional information is now available. The terms of the contract have been released, adding meaning to the situation.

Per an ESPN report, it’s a one-year deal worth $2.1 million. That’s the same as the contract signed earlier by Raheem Mostert. Those guys are being given the opportunity, it seems, to come in and compete for carries.

Miami earlier signed Chase Edmonds to a two-year deal worth $12 million. He’s making about 3 times more than Michel or Mostert per year. But Edmonds is more of a third-down back. I think they signed Edmonds for what he can do as a pass catcher and change-of-pace option.

They’ve got holdover Myles Gaskin, but he’s a lot like Edmonds (only 10 pounds lighter). With the Dolphins having made the strong move for Edmonds, that tells me the new regime doesn’t think all that much of Gaskin. (Is he even making the team?)

Maybe some nobody comes out of the woodwork. Salvon Ahmed had a couple of good games as a rookie. But I think we’re looking Michel and Mostert as the guys with some chance of stringing together some weeks with 16-18 carries.

I like Michel more. Mostert is 30, and he’s had a lot of problems staying healthy (particularly with ankle injuries).

Michel didn’t play well enough in New England to justify being a first-round pick; he never, for example, ran for 1,000 yards in a season. But there were some productive games. In their last Super Bowl season, he ran for 336 yards and 6 TDs in their three playoff games. He averaged 5.7 yards per carry in his final season.

And Michel showed some ability to tote the rock with the Rams last year. He started seven games, and he averaged 21 carries in those games, going over 120 yards at Minnesota and at Baltimore. Only one other back last year averaged over 20 carries in the games he started (Derrick Henry).

Michel isn’t much of a pass catcher, which works against him, but I would think there will be some weeks where he’ll be going into games looking like he’ll be their lead back, carrying the ball 16-18 times. They’ve got two against the Patriots, and I would guess he’ll be up for those games.