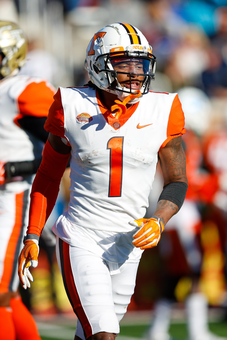 There can be some criticism of the Bears' third-round investment in Velus Jones (pictured). Jones spent six years in college, primarily playing special teams for four years at Southern Cal before transferring to Tennessee for two more seasons and playing wide receiver. Yesterday was his 25th birthday, kind of ancient for a rookie.

But I'm going to go ahead and call Jones a potential deep sleeper for 2022 anyway, because there's basically nothing to keep him off the field in Chicago. The Bears' No. 1 wide receiver will be Darnell Mooney. Their No. 2 will perhaps be Byron Pringle, but let's not get too excited about Pringle, who spent three years working with Patrick Mahomes but didn't do enough to merit any consideration for a second contract.

And then? A whole lot of nothing.

The Bears seem to be going the 2021 Houston Texans route this offseason. If they're not tanking, it's hard to see what the difference is. They've primarily been signing a whole bunch of modest veteran castoffs, especially at wide receiver. Yesterday they signed two of them.

After Mooney, here's every wide receiver on Chicago's roster who's caught a pass in an NFL game. Stats are their 2021 production.

Perhaps there's a lottery ticket there. David Moore produced on occasion in the past as Seattle's No. 3. Pettis flashed briefly, looking like he might be a potential breakout in San Francisco. St. Brown has the awesome name and productive brother. But let's be real: this is an ugly wide receiver corps.

It's difficult to see Justin Fields putting together a breakout season on this roster. The offensive line looks, to be frank, offensive. The wide receivers after Mooney are journeymen and rookies.

So I think David Montgomery looks viable; maybe not putting up huge rushing numbers, but putting up decent ones and catching a whole lot of dumpoff passes. Cole Kmet, certainly, figures to be very busy, and Mooney will have to be heavily targeted.

After that, maybe Pringle. But maybe 25-year-old Velus Jones.

On behalf of Jones (besides opportunity), there's stuff to like there. He's got good size (6-0, 204) and ran a 4.31 at the combine. Bears coaches talked him up after rookie minicamp. I've seen some good things about his work ethic. At worst, he'll contribute on special teams.

But there's also a chance he'll be one of the top 3 wideouts right away. In fact, I'd say it's kind of likely. I don't know that he'll be the next Amon-Ra St. Brown or anything, but somebody to consider in the very late rounds of an early draft.