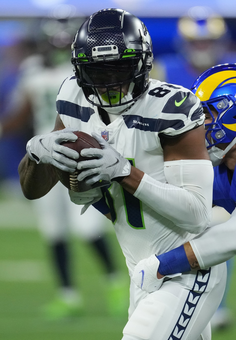 Chance for a top-15 season?

Tight end tends to be a shallow position in fantasy leagues, so attention must be paid to any realistic candidates for top-12 type production. Last year Noah Fant, generally considered a disappointment, was actually the 12th-best PPR tight end. So maybe this year it will be Gerald Everett.

The Chargers' new tight end got a hype story in The Athletic recently, with Daniel Popper writing that the team will use him "in a variety of ways." It seems wildly optimistic to hope for top-12 or even top-15 production, what with Everett never having gone for 500 yards or 5 TDs in a season, but at least some things can be said on his behalf.

Obviously, Everett is working with one of the game's elite young quarterbacks in Justin Herbert. There's also not a lot in the way of competition on the roster: Donald Parham and Tre McKitty are the nominal other players at the position. Everett's going to be the top option.

The negative, of course, is that Los Angeles has two great wideouts in Keenan Allen and Mike Williams, plus one of the game's very best pass-catching running backs in Austin Ekeler. They've even got a breakout candidate at No. 3 wideout in Josh Palmer. Top passing game or no, will be tough for Everett to put up significant numbers with so many strong targets ahead of him.

On his behalf, the article suggests that the team could take advantage of Everett's athleticism in other ways, including jet sweeps. The team doesn't have an established No. 2 running back, and Everett has at times carried the ball -- just 8 times for 51 yards and a score in his career, but 3 for 20 (both career highs) in Seattle last season. A little optimistic to think that will happen a bunch, but somebody put that into the writer's ear.

Everett's not Antonio Gates and he's probably not even Hunter Henry. Unlikely, I think, that he's a top-12 player at the position. In our magazine, he barely sneaks into the top 20.

But the realm of possible outcomes includes him making it into the top 15, if the Chargers actually do use him as much as the story suggests, and as they've used the position in the past. He won't be drafted that high. In TE-premium leagues, or those where a flex spot makes starting two players at the position reasonable or even desirable, he's a viable late-round choice. If a wide receiver gets injured, he might be even better.