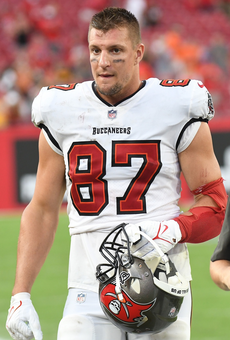 Rob Gronkowski is done – apparently – and that puts a different spin on the Tampa Bay offense. Previously most assumed Gronkowski would re-sign at some point, but he instead announced his retirement today.

The Bucs will need to find some production out of some other tight ends. Cameron Brate probably will be the first selected in fantasy drafts, but he was underwhelming last year. There were six games that Gronkowski either missed entirely or hardly played, and Brate in those games caught only 9 of the 22 passes thrown his way, for 88 yards (with 1 TD).

Brate caught 105 passes and 14 touchdowns in the 2016-17 seasons (he was a top-10 tight end in those seasons) but was really ineffective last year. Despite playing with a Hall of Fame quarterback, he caught only 53 percent of the passes thrown his way, averaging only 4.3 yards per target – last among all qualifying tight ends.

I will be interested to see what fourth-rounder Cade Otton looks like in the preseason. He was underused at Washington, catching only 78 passes and 6 TDs in his final 23 games, but he’s more of a traditional in-line tight end. Brate turns 31 next week and is more of an F tight end. If I’m in a dynasty league, I would select Otton rather than Brate.

The wild card is the potential that Gronkowski changes his mind. The Pro Football Talk website says Gronkowski’s agent, Drew Rosenhaus, told them in a text that he thinks Tom Brady will talk Gronkowski into returning during the season.

When we were putting together the magazine, I was torn whether to rank Brady ahead of Jalen Hurts and Lamar Jackson. Brady is a better passer than those guys, with more ability to diagnose coverages, but they have the considerable advantage of also being runners. With this retirement, I’m glad I slotted Brady behind those guys.

It’s been a tough offseason for Tampa Bay’s passing game. The team also released Antonio Brown, and Chris Godwin might miss some of the season as he works his way back from an ACL surgery.

Brady last year averaged 331 passing yards in his first eight games, with 25 TDs – over 3 per week. But he averaged 34 fewer yards in his remaining 11 games, and with only 21 TDs (just under 2 per week). Given the re-shuffling of the roster, I think we’re more likely to see the second-half version of Brady this year.

That said, when you look at Brady’s game logs from last year, Gronkowski doesn’t look like the key, No. 1 guy. Two of Brady’s top 3 games last year came when Gronkowski wasn’t playing. I see one average game without Gronk, and three others that were below average. For fantasy purposes, Brady probably will be affected more by playing without Godwin and Brown.

In the game logs below, I’ve got the no-Gronk games in bold.