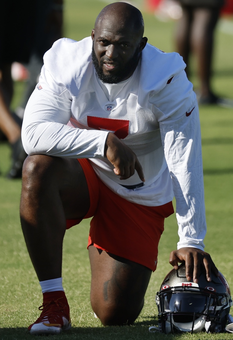 Bucs running back likely will show up overweight

It’s looking like Leonard Fournette will be showing up at camp well over his optimal playing weight, and that should have everyone putting more thought into using later-round picks on Rachaad White and KeShawn Vaughn. Most likely one of those guys will be starting some games.

Fournette is listed at 228 pounds at the team’s website, but long-time beat reporter Rick Stroud says Fournette appeared to be 30 pounds overweight at the team’s most recent minicamp, and that the coaches aren’t pleased about it. That’s huge news, with the Bucs having one of the most promising offenses in the league.

“The last time we saw Leonard Fournette, he was about a donut shy of 260,” Stroud recently said on his podcast. “He certainly didn’t look like a guy who could play every down.” The accompanying photo shows Fournette at that minicamp; he skipped the earlier (voluntary) workouts.

Fournette played at an elite level for most of last year. In his final 11 full games, he averaged 67 rushing and 36 receiving yards, with 12 TDs in those 11 games. With Fournette averaging 5.4 catches in those games, his production was almost identical to Jonathan Taylor’s in PPR formats.

But if Fournette’s lesser conditioning causes him to miss playing time or games, somebody else will need to move into a more prominent role. And that was really part of the thinking with Fournette even before the weight issues. He’s been in the league since 2017, and he’s missed at least one game every year. He’s played in 63 of 81 games as a pro.

If Fournette misses any time, the Bucs most likely will replace him with some combination of Rachaad White and KeShawn Vaughn. They don’t have Ronald Jones anymore, and Giovani Bernard is more of a third-down guy.

White, I think, will be the more-coveted later-round pick in drafts, but I’m not sure he’s any better than Vaughn. They look pretty similar to me. Both are former third-round picks. They’re about the same size, and with almost identical speed. Vaughn was more productive in college and has the advantage (if any) of having been around for two years. White might be a little more athletic, putting up numbers that were 6 and 8 inches better at the combine in the vertical and the board jumps.

Vaughn has been an afterthought for most of his first two seasons, buried behind Fournette and Jones. He had a 55-yard touchdown against Carolina in December, but wasn’t as impressive when they moved him into the starting lineup for their final two games – 10 carries for 29 yards and a touchdown gainst the Panthers, and 17 carries for 53 yards and a touchdown against the Eagles in the playoffs.

When the Bucs take the field in their preseason games, it should become apparent whether it will be White or Vaughn who looks like their Fournette fill-in. Whichever guy lands that role should have some top-20 running back games in him.

Of those 63 backs chosen in the third round, only 4 have put up top-10 numbers in their first season, with another two showing up in the teens. Only 9 of the 63 (1 in 7) have finished with top-30 PPR numbers.