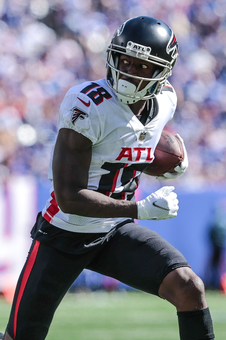 Ian Allan answers your fantasy football questions. In this edition: Is Calvin Ridley worth a selection in a keeper league? The troubling history of top-rated running backs. Contract-year players. And debating whether Patrick Mahomes is overrated or underrated.

I’m joining a 10-team PPR keeper league. Keepers must be selected after the 8th round, and you can only keep them for one year. They also must be on your roster the entire year. Would you spend a pick on Calvin Ridley?

Ridley has averaged 5.6 catches for 76 yards in his last 33 games, with 18 TDs. Those are top-10 per-game numbers. I don’t know that he’ll get back to those levels in 2023; let’s see who’s quarterbacking the Falcons. (And is Ridley even on the roster? – maybe they move him for a draft pick.) I don’t know anything about the mental health issues that sidelined him for the second half of last year, but I would expect he’ll be back to something close to his usual self in 2023. I’m not concerned at all about the suspension (which seems pretty silly, given the way the league has embraced gambling). I would guess that if we fast-forward the clock to July of 2023, Ridley will rank between 20th and 35th among wide receivers on most people’s boards. He’ll probably go in the fourth, fifth or sixth round in your draft next year. He’ll definitely be a keeper, but there is a cost involved. If you pick him in the eighth round, for example, you’re losing a decent player for the upcoming season, and he’ll be taking up an important roster spot all year, restricting your ability to sift through prospects on the waiver wire. I don’t think I’m interested in Ridley in the eighth. Off the top of my head, perhaps the 11th or 12th round.

I read recently that having the season's No. 1 RB on your fantasy team increases the likelihood of winning your league by 50%, which seems obvious. but is it also obvious where to draft those guys? How many of the season's top fantasy RBs were actually taken in the first round of fantasy drafts?

Running back has been a wildly volatile position in recent years. In all but one of the last 14 seasons (and this is hard to believe), the most productive running back has been a guy who didn’t finish in the top 5 the previous year. If we’re operating under the assumption that we’re getting another one of those years, then we can start by eliminating Jonathan Taylor, Austin Ekeler, Najee Harris, Joe Mixon and James Conner from consideration for the top spot. Leonard Fournette, Ezekiel Elliott, Antonio Gibson, Alvin Kamara and Cordarrelle Patterson were the others in the top 10 last year, but none of them look like a viable candidate for No. 1 overall. If the best back is again going to come from outside the top 5, I would think it will be Christian McCaffrey.

Things seemed to be a lot easier in the past. Prior to this recent 14-year run, all but two of the previous 18 No. 1 running backs had finished with top-4 numbers in their previous season. Weird.

With the tidbit on who's playing for a contract in the magazine, is there a more in-depth version on who is going to save their bodies till next year free agency? I understand there is more action going on with teams not showing up with the monies for players. Please give your take on which owners are stepping up to the plate.

You’re dancing around an interesting issue. Most observers seem to believe that when a player is in a contract year, he will be extra motivated – playing hard to show he’s worthy of a big contract. Rashaad Penny seemed to be one of those guys late last year, running hard in the final month and a half of the season. But the opposite could also be true at times. If a player is headed for free agency, he might be more wary of an injury that would damage his future value. Baker Mayfield, as an example, probably shouldn’t have played with a separated shoulder last year. By trying to play hurt, he undermined his standing with the team. Had Mayfield simply missed eight weeks or whatever, he might still be starting for the Browns. When you have a running back or wide receiver coming back from a hamstring or ankle injury, I would think some would be leery of trying to play hurt in December, figuring they’re better off financially just waiting for free agency, giving them a better chance of being healthy, with prospective buyers having last seen them as productive players. My general policy with contract-year players is to get more interested in them when there’s some indication they’re gunning for big numbers.

All of Kansas City’s receivers have flaws. Kelce is 33 and is showing his mileage and slowing down. Valdes-Scantling is a one-dimensional deep-threat. Smith-Schuster has been ineffective since 2018. Skyy Moore is small and is already hurt. Mecole Hardman has declined every year and caught only 2 TDs last year. Both of their main RBs are poor in the passing game. With all this said, don't you think ranking Mahomes the 4th-best QB is overly optimistic? You have his TD total at 2.17 per game, which equates to 36.9 TDs. Not sure if that counts running TDs but Mahomes has ran in only 2 each of the last two years. If we say Kelce catches 9 like he did last year and Mahomes runs in another 2, who is going to catch the other 28?

Why am I being painted as the driver of the Mahomes bandwagon? I have some of the same concerns. That’s why I dropped him down to No. 4 among quarterbacks, behind Justin Herbert and Joe Burrow. Looking at the Experts Poll, I see 90 percent of those guys have Mahomes above Burrow. And 13 of those 20 rank Mahomes higher than Herbert (who’s my No. 1). Where I’ve got Mahomes slotted, it’s unlikely I’ll be picking him in any leagues. At the same time, I still have considerable respect for his potential. I have no interest in dropping him behind guys like Jackson, Murray and Hurts. Brady and Stafford might put up better passing numbers, but they don’t run. I remember the lull in the middle of last season, when it looked like defenses had Mahomes figured out, but he rebounded really nicely late last year (at least until the second half of the AFC Championship game). In his last eight games of last season he averaged 314 passing yards, with 23 TDs versus 4 interceptions – numbers on par with his huge season back in 2018.

In my 14 team ppr league, we always use an auction rather than a draft. Looking at last year’s results, most players that had ADPs of rounds 2 through 4 seemed to be expensive or overvalued by my league-mates. With this information, my strategy for this year will be to target 2 players with 1st round ADPs and fill out the rest of my team with value players. Given this information, should I target “safer” 1st round players?

If you’ve got a few seasons to work with, you should be able to build a template showing what players likely will cost. Set those side by side against your player prices, and it will give you a good idea of where the values are. Your job is to try to turn your $100 into a collection of players worth perhaps $160. Keep in mind that everyone is working with different player lists. That is, you might be expecting the 20th-best player to go for $18, but your 20th-best player might not be higher than 30th on anyone else’s draft board. I have found in auctions that over time, everyone begins to agree on what players are worth, making it more difficult to land the eye-popping deals. In the most recent auction in the magazine, for example, I spent most of the auction waiting for great deals that simply never came. Late in the auction, I was wishing I could back things up and bid on some more-modest deals that I passed on earlier. In addition, keep in mind that sometimes it takes a while for the wallets to get warmed up, with one of the first players auctioned being one of the best deals. So some thought should be given about how high you’ll be willing to go on guys like Jonathan Taylor, Cooper Kupp and Austin Ekeler. If you think Taylor is “worth” $30, for example, are you going to be willing to bid $27 if he’s the first player nominated?

I see in the magazine that you aren't any higher on Miles Sanders than I am. Too many mouths to feed in the Philly backfield, and he's not much of a pass-catcher. But his recent comment insisting that fantasy owners not draft him this year almost feels like a dare meant to throw us off the scent. Does that comment make you reconsider Sanders at all or are you comfortable with where you currently value him?

Philadelphia switched to a run-dominated approach about halfway through last season, and Sanders missed most of those games. In his three full games during the run-heavy phase, he was very productive, running for 120, 131 and 94 yards. That gets my attention. But I don’t know that they’re going to stick with that style. They drafted DeVonta Smith a year ago and pulled off the big trade for A.J. Brown. That indicates to me that they want to do more with the pass. I would think they’ll have Jalen Hurts passing more, trying to figure out if they want him to be their quarterback in 2023. And if they’re passing more, they logically would be dialing that run game back some. Sanders has been underwhelming in short-yardage and goal-line situations – he’s not a banger or a pile pusher. The Eagles scored 13 rushing touchdowns from either the 1- or 2-yard line last year, and he didn’t score any of them.

The 6/23 update (under "Your Stuff") includes projections for the 2022 season (Excel format) has three tabs dated as 2021 proj. Just wanted to make sure this is truly the 2022 file? I also wanted to know if you have estimated rushing attempts per player (season or game totals). I have a league that gives a point per rushing attempt and that is not on option on the premium cheat sheet and custom rankings.

Thanks for pointing out the typo with the years. All of the numbers you’re looking at are projections for the upcoming season. In regards to rushing attempts, we’ve toyed around with the idea of adding another column to the stat projections file but are nervous about making it even larger than it already is. For now, please account for those rushing attempt bonus points by folding them in with the yards. Assuming 4 yards per carry should suffice. So if you’re currently awarding 1 point for every 10 rushing yards and 1 point per carry, go into custom scoring and change it to 3.5 points for every 10 rushing yards. If you’re using a half point per carry, change the custom scoring to 2.25 points per 10 rushing yards.