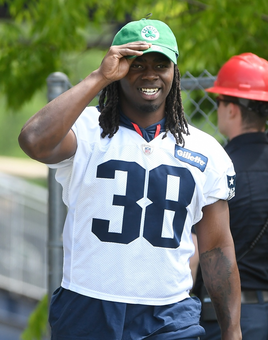 Ian Allan answers your fantasy questions. In this edition. Identifying the best backup running backs. Hitting on running backs in the middle rounds. Is there a Super Bowl hangover? Success rates of younger running backs. And more.

Which backup running backs could be league winners if the team’s starting RB misses extended time?

To clarify, Jim’s question isn’t, “Rank the backup running backs.” He’s instead looking for a list of running backs who might really light things up if given the chance to move into the featured role. It’s a little different.

I would begin with Rhamondre Stevenson (pictured). If he becomes a starter, I think he’ll be as good (maybe better) than Damien Harris. Tony Pollard isn’t as rugged as Ezekiel Elliott but is more explosive; I could see Pollard stringing together some good games if given the chance. And the list must also include Kareem Hunt, though with a slight asterisk, given how well D’Ernest Johnson played last year (Johnson ran for over 120 against the Broncos and Bengals, making is reasonable to wonder if he’s as good as Hunt). And let’s put a couple of rookies on the list: Ken Walker and Brian Robinson. Walker was really explosive at Michigan State, with some potential to start ripping off big plays if Rashaad Penny gets hurt. Robinson doesn’t have that kind of big-play potential, but Washington has an offense that seems to be friendly to running backs – Robinson’s production (if he starts) might not be much different than Antonio Gibson’s. Alexander Mattison and Darrell Henderson both look like above-average backup choices, but neither is a top-5 kind of guy, given their limitations and the offenses they’re in.

I've been loyally with FFI since the 90s - love everything you do. There was a fact you covered a few weeks ago that was quite striking to me - I believe it was that each of the last eight No. 1 overall RBs were in the age range of 21-25. Feeling like the most valuable asset in fantasy is to have the No. 1 RB overall, how do you feel about focusing on a WR in round 1 and then stacking as many as you can get of the RBs in that age range - AJ Dillon, Javonte Williams, Akers, Etienne, etc. - and figuring that even though the path for them to top 5 at the position isn't clear now, history suggests at least one of them will wind up there?

It’s a young man’s position. Consider the chart below. It shows the 50 backs in the last 10 years who’ve finished with top-5 numbers (PPR scoring). Only 12 of these backs were older than 26 at the end of the year. Another 8 were 26 years old. So 60 percent of these running backs were younger. I don’t know about drafting those guys exclusively, but you shouldn’t hesitate to draft a running back because you don’t feel he’s proven enough. It’s a position where things are always changing.

In the chart below, the 26-year-olds are tagged with black dots. The older guys are bolded, and there aren’t a lot of them.

I'm in a standard 3-man keeper league. Keeping 3 out of: Prescott, Ekeler, Penny, D.Adams, McLaurin, D.Cook, Barkley, T.Lawrence, C.Davis and D.Henderson. Adams is the no-brainer. Leaning Ekeler and Cook with the other 2 spots. I've kept wishing Barkley's natural athletic talent would show up - but alas only injuries. And with him being stuck on a bottom-10 team. What do you think?

I think Ekeler, not Adams, is the No. 1 keeper. But regardless, you’re not letting either of those guys go. Prescott might be a top-5 quarterback, but given the supply-demand of the position, I don’t think he gets into the conversion. It will be another running back. Penny was really good for the final month of last year, but he’s had a lot of injuries, and I don’t think he’ll be much of a factor as a receiver. Maybe something happens with the Giants in August that causes you to go with Barkley. He’s got a better offensive line in front of him, and maybe the coaching switch has a sizable impact. But if we’re making the decision today, I think it has to be Cook.

The RB dead zone is generally referred to as rounds 3-6 in fantasy drafts where RB hit rates have been historically poor. What are your thoughts on this school of thought?

Running back is a volatile position. There will be a lot of backs chosen in the first two rounds who will miss. We know that. So you would think that some chosen in the third and fourth rounds will move up to fill that void. By definition, there will be 10 running backs who finish the season with top-10 numbers – they have to come from somewhere.

Below see a chart that shows the best of the last 100 running backs to finish outside the top 20. That is, I looked at the 10 best running backs from the last 10 years who finished outside the top 20 (using PPR scoring). These are player who ranked between 21st and 30th in scoring, so I would think a good number of them were picked in the third, fourth and fifth rounds of drafts the next year. The chart shows the 34 (about one in 3) who finished with top-30 numbers. Only 19 (about 1 in 5) finished with top-20 numbers.

Not all of the running backs in this chart, of course, last until the third round. Austin Ekeler, for recently, was a top-5 back on my board last year; I don’t think he made it to the middle of the second round in many drafts.

I play in a 16-team keeper league where we can keep up to five players. The best unprotected players go back into the auction each fall. Rookies can be kept up to four years. Franchise players can be kept for only one year at an established cost (think $25 out of $100 annual budget), and only one franchise player is allowed per team. My question is whether to hang onto aging franchise-level players (I have Henry and Kupp), or am I better off trading them for exciting young players still under rookie status (like Tee Higgins or Javonte Williams)? What would your strategy be?

Kupp would be one of the top few players on the board; maybe the No. 1 wide receiver. So I would bring him back on the franchise tag. If you could also dish off Henry while getting either Higgins or Williams in return, that would be good. Either would probably be a keeper for you for the next three-four years. (But I’m not sure you’ll be able to find an owner that would be willing to give either of those guys up for 28-year-old Derrick Henry.)

A couple of us were talking about the whether there is really a Super Bowl hangover. Of course, this discussion was over a couple of beers. That got me wondering whether there is a difference in performance/results between the winner and loser the next season? I would think the loser might have a chip on their shoulder and work hard for another trip to the championship game. Is there a difference good or bad?