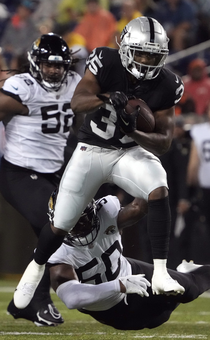 How will backfield shake out?

Football is back, like it was never away. Jacksonville didn't use any starters, but the Raiders did, which caused much discussion and debate over how the backfield might be utilized in the new, Josh McDaniels era. Most notably, we need to wonder how much we can trust in Josh Jacobs.

Jacobs started and got 5 carries and 2 catches for Las Vegas, which is noteworthy since all the other projected starters -- Derek Carr, Davante Adams, Darren Waller, Hunter Renfrow -- didn't play. Now McDaniels has long been working under Bill Belichick, who has never been concerned about putting key starters in harm's way in meaningless games, so it's not necessarily a big deal. But it didn't take long for the fantasy community to jump to Jacobs is on the trade block and he's fighting for a starting job and that sort of speculation.

The Raiders didn't pick up Jacobs' fifth-year option, unsurprisingly, so pretty good chance he's in his final season with the team. They've got Kenyan Drake (who also played last night) and fourth-rounder Zamir White (pictured), and White is a guy we've been interested in all along -- ranked him 3rd (behind Breece Hall and Ken Walker) among the rookie running backs in dynasty formats. Just ahead of another Georgia back, second-rounder James Cook.

Georgia won the national championship last year, and those two backs were a large part of it. Each scored 11 touchdowns, giving the school 2 of the 53 college running backs (and one of just two sets of teammates) to score that many. The list features a lot of the most interesting rookie running backs currently on NFL rosters; I've bolded those players in the table below, which is sorted by 2021 touchdowns.

Another rookie in the table was playing last night, Jaguars fifth-rounder Snoop Conner. He started at running back (4 carries, 10 yards) while also returning an early kickoff. His appeal has been hurt somewhat by James Robinson avoiding the PUP list at the start of camp. Difficult to see Conner being any better than the No. 3, and Jacksonville also has Mekhi Sargent (who was impressive last preseason, and again last night: 5 for 22 on the ground, and 5 for 37 in the passing game). Maybe Conner carves out a role, but that can't be counted on, especially if Robinson is ready to go (and of course there's Travis Etienne).

White's first carry went for 14 yards last night, and he later took a little screen pass 19 yards through traffic, dragging a tackler at the end of the run. I had been hoping to secure him with a mid-2nd-round pick in my rookie draft back in May, but he went at pick 2.03.

I don't expect White to open as the starter in Las Vegas this year. Should be Jacobs, with Drake playing in a lot of passing situations. But once one or both of those guys gets hurt, White will get his chance. Definitely a player to be selecting late in drafts, with a realistic possibility to start games at some point.