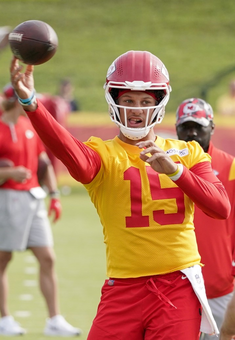 To play or not to play

ASK THE EXPERTS appears weekly from training camp through the Super Bowl with answers to a new question being posted Thursday morning. How the guest experts responded when we asked them: How do you wish NFL teams handled preseason games?

Great question! The problem with preseason games is the hype that happens when Player X looks great against scrubs from the other team. The purpose of the preseason games is to determine which players that they want to keep. That's pretty much it. So if they know they want a player on the roster, then playing them in a preseason game just shortens the assessment time for the slew of guys that are on the fence. I like the format that almost all teams use -- try out players to determine the final roster in all games and then go live in the first half of game three. You just have to resist buying into the over-hype that happens after preseason games make players look better than they really are.

The easy, popular answer is to rest all starters to avoid injuries. But, I'll take a contrarian viewpoint. Most preseason injuries happen on the practice field, not in a game. I'll reference Cam Akers and JK Dobbins as the two biggest preseason injuries from last year -- neither injury occurred in a game. But also, it's always helpful to see potential fantasy players on the field, even if it's in base offenses against second-string defenses.

I wish teams played all of their starters a little bit. I wish each team started their first team starters for the first quarter of every game. That way we could get a feel for who was winning the camp battles etc. But I know that is unrealistic in this fast-paced, physical game of football. I also wish the NFL played a game every night of the week and that I had a slush puppy drink machine with a bottomless supply of raspberry and cherry drink....

It’s all Sean McVay’s fault. I think he’s the guy who popularized the idea of simply not playing anyone in the preseason. I would prefer to see a lot more notable players getting a lot more playing time. There are some coaches, however, who’ll play their guys a decent amount. Josh McDaniels, for example, gave Josh Jacobs a surprising number of touches last week. McDaniels says he’s a believer that running backs need to get some actual game action. McDaniels comes over from New England, and they have the same approach.

With 3 preseason games, it would be great to see a mix of starters and veterans in the first game. Definitely like to see starters in the second game for the first half, maybe into the third quarter. Game 3, even though it would be nice to see the starters for at least 2 series, I can see teams not risking injuries and benching them all -- and I'm OK with that.

In a perfect world, as an analyst, I wish coaches started their Week 1 starters on both sides of the ball, had them play a single snap, and then rested them. That way we know how position battles are playing out but all but remove the risk of unnecessary preseason injuries.

I'm fine with teams holding out irreplaceable franchise players in games. Patrick Mahomes and Aaron Rodgers are getting daily work with their new receivers in practices, we don't need to see it happen and risk seeing some overzealous defensive lineman fighting for a roster spot falling on their ankle or something. Star wideouts and running backs, hey, I wouldn't play those guys either. But rookies and guys in camp battles, or guys headed for clear, expanded roles -- those players need to get in some game action. So basically I want at least one half of one of the games to be played with most starters, so those guys can get their feet wet and we can see how the offense might look (while allowing it's Chad Henne or Jordan Love at quarterback, and with running backs like Aaron Jones also in street clothes).