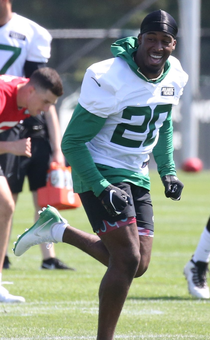 Which rookie are you most excited about?

ASK THE EXPERTS appears weekly from training camp through the Super Bowl with answers to a new question being posted Thursday morning. How the guest experts responded when we asked them: Which rookie are you most excited to see on the field this preseason?

Lots of praise for Kansas City wide receiver Skyy Moore so far. Team relieved that his hip scare in camp this week is not serious. He is on the right team at the right time, as KC has a lot of targets available. Also looking forward to Browns wide receiver David Bell returning from PUP list soon, possibly by preseason. The slot role replacing Jarvis Landry is still up for grabs. The boys from OSU, Chris Olave and Garrett Wilson, are special, I watched every Buckeyes game they played in. I'm really excited to see them this season as both are in situations, the Saints and the J-E-T-S, where the ball will be in the air a lot.

None of the rookie quarterbacks are likely to start Day 1. It was a great wide receiver class, sure, but none of the top ones (6 went in the top 20) excite me too much. They do not have elite passers throwing them the ball nor do they play on high-powered offences that could generate lots of touches/TDs. That leaves me with Jets running back Breece Hall. I am going to love watching him develop and attack the NFL this year. The Jets have an upgraded offensive line (still not great but improving) and hopes are that Zach Wilson can use the new pass catchers New York has assembled to create a better year. Hall is big, fast and smart and he can be on the field all three downs. NY has a crowded backfield but once Hall gets the ball I am betting on a dominating new starter for the Jets.

I'm mostly interested in running back Kenneth Walker III with Seattle. He's the second running back drafted, after a season when he ran for 1,636 yards and scored 19 touchdowns for Michigan State. The Seahawks want to run more often now that Russell Wilson is gone and the quarterback/passing game is a far bigger question mark than in years. Chris Carson has retired and only Rashaad Penny currently stands higher on the depth charts. Penny has always been an injury waiting to happen and his freakish great performances at the end of last year all went against the worst four rushing defenses in the NFL. Remember when Jonathan Taylor started 2020 behind Marlon Mack? Yeah, I can't either.

Drake London is the rookie receiver with the clearest path to an alpha role this year, but went to a team with the least compelling quarterback situation. Can he overcome an inefficient scheme with a heavy target load? Fantasy managers are counting on it given his ADP.

For me it's the rookie that will be selected earliest in every draft, Breece Hall. It's the Jets, so it can be hard to get fully on board with their players, but Hall was the first running back drafted and there's no reason to bring him along slowly. Michael Carter had a credible rookie season, but they need a running back who can take some pressure off their young passer and iffy passing game, and that's a lot more likely to be Hall. With all of the wide receivers, there's more long-term potential than the likelihood of them being the next Justin Jefferson or JaMarr Chase; I think most will be selected before I'd consider them.