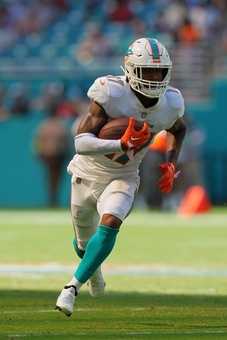 Dolphins at Ravens: Some of the early point spreads seem a little off to me. Baltimore favored by 3.5 in this game. Miami has the better defense and maybe the better overall offensive skill talent too, setting aside quarterback. Sounds like J.K. Dobbins might play, not in my lineup. Lamar, Andrews, Bateman and the Dolphins wideouts and perhaps Edmonds, that be it.

Jets at Browns: Cleveland a potential survivor pool pick. Bold counting on Cleveland for anything, but the Jets do seem that hapless right now. But we'll see. Michael Carter seems like the viable option for the Jets, the running backs for Cleveland. The names change, the passing games remains as sketchy as ever.

Commanders at Lions: If we're going by Week 1, seems likely to be more offense than defense in this game. I'm not thrilled about the D'Andre Swift injury concerns, but I personally am starting him and presuming he's fine; limited practice on Friday. Makes sense to downgrade him somewhat and upgrade Jamaal Williams, and if Swift is actually inactive, Williams becomes an excellent choice. Washington put three wide receivers in the end zone last week. That won't happen all the time. The defense is similarly soft this week, so they're all viable, as is Carson Wentz, but lower expectations from 4 TDs this time around. We've got all three close, implying a level of uncertainty into who the No. 1 actually is these days.

Colts at Jaguars: Colts opened a 5.5 point favorite, which seemed odd with them predictably flopping as an even heavier favorite at Houston. It's now 3.5, which is more reasonable, and maybe even optimistic given that they could be without two of their top 3 wide receivers. Nobody was starting Alec Pierce, but all of us wanted to start Michael Pittman, and he didn't practice at all the last two days after injuring a quad in practice. I'm benching him unless I hear something really favorable, and I don't personally want to chance Ashton Dulin or Parris Campbell. So I'll use Taylor and Hines and look elsewhere for wide receivers. Jacksonville there's Christian Kirk and running back committee which looks like a split, unfortunate for those who selected Etienne.

Bucs at Saints: It's Week 2 and we're dealing with a whole lot of injuries already. No Chris Godwin, that's the easy one. Mike Evans, Julio Jones, Leonard Fournette and Russell Gage are all banged-up. But I think they're playing and would use all of them as if they're relatively healthy, which for me means Evans and Fournette yes, Jones maybe (I need to use him in a league where I was counting on Allen Lazard as a starter), and Gage probably not. (If Jones inactive, I'd think about Gage, but don't like him as a No. 3, even if he was healthy.) With the Saints Alvin Kamara is also banged-up, not practicing. Risky to use him, risky to use Mark Ingram too because he's also banged-up and (I think) pretty much washed-up. I would not use a Saints running back. I guess I need to say something about Taysom Hill. Given the injuries, and him being healthy, might be a week he has a larger role. I consider him risky with the unpredictable usage, but less risky if one or two of those running backs winds up inactive.

Panthers at Giants: Both running backs, yes. Giants wide receivers, we're still sorting out the depth chart here. Not players I'd want to use. Give me DJ Moore for Carolina and that's pretty much it. Robby (Robbie? I don't remember) Anderson on his old stomping grounds, if that's an angle you'd like to play, but he's not catching long touchdowns every week.

Patriots at Steelers: I'm not sure which draft-day off-rankings decision bugs me most, but picking Najee Harris over Joe Mixon in a league is one of them. Harris is playing, but not a great situation and he's not 100 percent. For the Patriots, Damien Harris and Rhamondre Stevenson should be the focal point of the offense. Feels like a lower-scoring game, so not the best week to invest heavily in the pass catchers for either team; Diontae Johnson sure and perhaps Pat Freiermuth.

Falcons at Rams: Rams are also a potential Survivor pick, with the extra time off and need to bounce back from their Week 1 pasting. Atlanta shouldn't provide much resistance defensively, though the Rams offensive line could have problems at time with any defensive front. I'd use Darrell Henderson while conceding the Rams say Cam Akers had a good practice week (I still would not use Akers, nor did I roster him so it's a moot point). For Atlanta, Pitts, London and Patterson. For the Rams, Kupp of course and I'd give Allen Robinson a second chance.

Seahawks at 49ers: San Francisco favored by 9 or 10 in another of the week's screwier lines. I'm not placing a ton of stock in Seattle's ridiculous win over Denver, just questioning why a San Francisco team that lost in Chicago is a slam-dunk over anyone. Jeff Wilson and Deebo yes. I'm benching George Kittle, I don't much care if he's active. Needs to play a game or at least practice fully all week before he gets off my bench or makes me regret drafting him in the first place. Best argument for the point spread is that Seattle's offense looks terrible and San Francisco's defense is good, so this good be a 17-6 type of eyesore. I'd bet the under.

Bengals at Cowboys: Dak Prescott has a 6-8 week thumb injury, but Jerry Jones won't put on him on IR (which would cost him 4 weeks). Smart or stubborn? Whatever. Dalton Schultz and grudgingly CeeDee Lamb are the Cowboys to use. Dallas still has a tough defense, I think, so while Mixon and Chase are obvious every-week guys I need to at least debate the others. But Tee Higgins should be fine and Joe Burrow and Hayden Hurst are at least possibilities (I don't love Burrow since I don't foresee a shootout with Dallas as presently constituted). Bengals should win this game, but maybe Dallas gets a takeaway or two to make things interesting.

Texans at Broncos: Still annoyed about the Broncos loss the other night. The long field goal try was just part of it, the numerous mistakes before that most of it. Houston should have upset the Colts, blowing it in part due to some coaching decisions of their own. But I'll sign off on the key Broncos. Dameon Pierce is a tougher sell, but surely Houston will drift away from Rex Burkhead leading the way soon enough. We don't have either one ranked particularly favorably. Brandin Cooks, sure.

Cardinals at Raiders: Based on what I saw from the defenses last week, especially Arizona's, I like the starters here, ala both quarterbacks and starting running backs, tight ends, and No. 1 wideouts. With injuries destroying several lineups, I've picked up and am starting Greg Dortch, yes, Greg Dortch. Makes as much sense as a No. 2/3 wideout as anyone else I could use. Ranked accordingly. Is there risk, sure, there's risk in using injured players too. Not saying I'd start him over a fully healthy, obviously better starter elsewhere. But ranked favorably and appropriately, I think.

Bears at Packers: Made the Packers my survivor pick because I expect a bounce-back, they're way better than Chicago, and worst-case scenario I'll have another reason to dislike Aaron Rodgers if they let me down. Since this is the night game, risky to use Allen Lazard, who's probably playing but might be limited. Both Aaron Jones and AJ Dillon, at least, should be busy as runners and receivers. Not crazy about anything connected with the Bears offense, easy throws to Cole Kmet seem like the extent of what can be strongly considered, Darnell Mooney to a lesser extent. I realize Kmet got shut out last week. Maybe Justin Fields runs enough to spring the upset, but I doubt it.

Titans at Bills: Two overlapping Monday games. Weird. Normally they make one of the games in a western type location. Schedule makers probably at the mercy of some TV demand I guess. Anyhoo, Bills should roll and I like their starters across the board. Titans, uh, Derrick Henry I guess, though not with enthusiasm. Dontrell Hilliard iffy, for all you Less than Zero RBers who might have him as a lineup choice.

Vikings at Eagles: Should be an entertaining game with more offense than defense. Teams relatively healthy, compared to the rest of the league.

Will answer questions over the course of day, as activities allow; there will be gaps for kid sporting events and band competitions and other fall activities (cider drinking? leaf raking?). When in doubt, use the rankings. Enjoy the games.