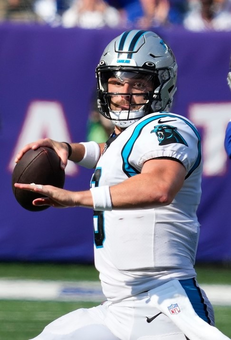 What follows is a brief look at all the games with how I'd react in my own lineups to injury developments or other news. The official rankings are the ones in the Weekly. Those take precedence. But sometimes players are very close, and in those cases I'm glad to offer opinions on how I'd approach those situations. Sometimes I like certain players more or less than Ian, and sometimes I have different risk tolerance with injuries etc. If I don't get to your question, either I missed it (it happens) or the rankings are very clear. (If one guy is ranked a dozen spots above somebody else, I'm going to respect that more often than not; we put a lot of time into those things.)

Injuries and illness are really messing up lineups. It's only Week 3, but it feels like mid- or late-season, or back when teams were losing players left and right to COVID. When Josh Jacob misses the team trip due to "illness," I have to wonder if something specific is being obscured. Anyway, answers I give today might change if we get more information in the next 24 hours. But here's where there things are on Saturday morning.

Saints at Panthers: Jameis Winston, Alvin Kamara and Christian McCaffrey are among the key banged-up players who are apparently playing in this one. Winston shows up with both ankle and back concerns, which seems bad for a theoretically mobile quarterback. Former No. 1 overall picks with their 2nd teams squaring off, that's one angle that's not really being discussed. McCaffrey is fine, though it's still up in the air as to whether he's the player he used to be.

Texans at Bears: I'm using Dameon Pierce where I have him, under the belief that Chicago's defense, especially against the run, is weak, and this could be Pierce's breakout game. For Chicago, I'd be using David Montgomery. The passing games are less encouraging, since Houston's hasn't done much, but I guess Brandin Cooks is viable. Chicago's hasn't done anything. I won't be recommending Kmet or Mooney until I see the Bears actually try to throw the ball. There is some deep sleeper appeal in O.J. Howard, with Houston's other tight ends either out or hurting, but it's a little bold for me unless I'm really desperate.

Kansas City at Colts: Michael Pittman returns, and is going back in my lineup. Kansas City is healthy. They were the most popular pick in my Survivor Pool and I suppose I wish I'd gone with them since my actual choice (which I can't change) has a questionable quarterback. But I don't like picking road teams and do think the Colts are better than they've shown so far. But KC would be the best pick.

Bills at Dolphins: Buffalo's entire defense is hurting, and Tua and company are coming off a huge game. I certainly wouldn't be benching Hill or Waddle, obviously, and I believe Tua is a viable start. But Buffalo's second-string secondary might well be better than the Baltimore group that the Dolphin lit up; I think the Bills are still going to show up and play defense. Gabriel Davis (ankle) and Dawson Knox (foot) are expected to play. Davis has more upside and I'd be more likely to use him, while looking elsewhere with Knox. Somebody offered me Raheem Mostert in a trade this week. Yuh.

Lions at Vikings: D'Andre Swift banged up and might be limited, I'm starting him anyway. I'm benching T.J. Hockenson just because he's been terrible, but he's also hurting. Minnesota's main injury is to their pride after getting waxed by the Eagles a few nights ago. Probably a higher scoring game.

Ravens at Patriots: J.K. Dobbins. I'm not starting him until after he plays in a game. He should be active for this one, but I'm expecting him to get limited snaps even if he is. For the Patriots, I'm wary of Jakobi Meyers, dealing with an injury, but probably if he's active he's fine. But I'd prefer to use Nelson Agholor as my spot starter, and am doing so in a league. Patriots will likely have to pass more than run against this defense. Rashod Bateman is the tricky case, productive but on relatively few targets. Not an automatic start, but some potential, given what he's done so far.

Bengals at Jets: Jets come off the miracle win, Bengals are 0-2. But I think Cincinnati is unlucky not to have a couple of wins; just slow starters thus far. And Jets defense doesn't have much. I like the Bengals offense in this game. For the Jets, do you start Garrett Wilson off his breakout game? I think he's the No. 1, but you don't get last week's points, so I'm going to be careful assuming another big game is coming. In general, I like the offenses for both teams. Hayden Hurst questionable, I'm being careful with him, too, but hard to find productive TEs right now.

Raiders at Titans: I went around to my lineups benching Josh Jacobs everywhere. Illness, didn't travel with team. Game is Sunday so there's still time for him to go there on his own, but I'm not counting on it. Zamir White should start, but Brandon Bolden will play in passing situations. I am not personally willing to count on White being featured, but I see some all over him as a great fill-in. Depends on your risk tolerance. Raiders D not great so if I had Derrick Henry anywhere I'd be using him.

Eagles at Commanders: Revenge game for Carson Wentz, I guess, but I think the Eagles are really good and deep and should be all over him. I'm starting their defense, and Jalen Hurts and his key receivers. I suppose Miles Sanders if I had him. Washington offense has been productive so there's some potential there, while keeping in mind a different receiver might step up with the best game each week. But a higher-scoring game on tap, giving both teams a lot of fine options. Both teams are healthy, which counts for a lot so far this year.

Jaguars at Chargers: So yeah, I picked the Chargers in Survivor, having to make my decision before all the skepticism about Justin Herbert (ribs). The betting line moved from Chargers by like 10 points to Chargers by 3 or 4, which is taken to mean all the sharps think Herbert's not playing. Could be, or could be a lot of people who don't know just following those who think they do. I personally think Herbert will at least start the game and give it a go, and I have not yet removed him from my lineups. I have Matthew Stafford available to pivot too, and the Rams game starts later. Keenan Allen is also questionable, him I'm inclined to bench because whereas Herbert's seems to be a pain tolerance issue, Allen's hamstring is more limiting and I think he's more likely to be held out. I don't know how I built teams with guys like Kittle and Allen, I guess it was all the people saying there's no such thing as injury prone. Jaguars are healthy, but I think the Chargers defense is good.

Rams at Cardinals: Sounds like James Conner (ankle) is playing; I think he's at slightly more risk of limited snaps or an early seat and would like to use an alternative if I have one comparably ranked. Rams should win, but there's some chance of a higher-scoring game, despite the fact that Los Angeles has kind of had Kyler Murray's number over the years. Cam Akers' expanded role in the offense last week didn't show me any more than his featured role in last year's playoffs; I'm not sure the guy still has it and if I were using a Rams running back it'd be Darrell Henderson.

Falcons at Seahawks: Another game with two lesser offenses facing two lesser defenses, making it tempting to use guys like Tyler Lockett and Rashaad Penny, while definitely using Drake London, perhaps Cordarrelle Patterson, and, yes, Kyle Pitts. I can't believe his absence from the passing game will continue much longer and believe he deserves another shot this week. Not particularly keen on Marcus Mariota, but at least the matchup is good; you could do worse.

Packers at Bucs: The classic example of the injured players game. Both teams have injury-riddled wide receiving corps; again, it's Week 3. I guess this is why players like Sammy Watkins and Julio Jones don't attract huge interest in free agency, they can't be relied upon to stay healthy. Watkins out, Jones questionable, Godwin out, Evans suspended, Gage and Watson and Cobb banged up. It's nuts, but makes Allen Lazard look viable and suddenly people are mulling whether to use Cole Beasley of all people. Maybe Aaron Rodgers and Tom Brady (also banged up) surprise, but this feels like more of a defensive struggle. Leonard Fournette also less than 100 percent but I'm assuming he's fine and using him.

49ers at Broncos: Hasn't taken long for the derision for Russell Wilson and the Broncos to come out, to the point where many will consider it an upset if they actually play well and win this game. It's possible they haven't hit rock bottom yet, and that will come here in an ugly loss to a good 49ers defense. But I'm not quite giving up just yet, and think Wilson-Courtland Sutton and maybe the running back tandem will be decent. Not willing to risk Jerry Jeudy, though, questionable with multiple injuries. George Kittle is playing, which should help San Francisco's offense, as should Jimmy Garoppolo. Jeff Wilson starts at running back and is also viable, I'm not sure if the No. 2 will be Jordan Mason or Marlon Mack; rostering Mason, hopeful he gets a shot if and when Wilson gets hurt, as all Niners backs seem to do.

Cowboys at Giants: Are all your rowdy friends coming over tonight? If so, they get the thrilling matchup of Cooper Rush versus Daniel Jones, and Ezekiel Elliott's worn-out body versus Saquon Barkley's presumably still capable one. Dallas defense very good, still, as expected, while the Giants may be better than expected, although in fairness they've opened against the Titans and Panthers, so it's a little early. No Dalton Schultz, no clear idea who the top Giants receivers will be. CeeDee Lamb the best receiving option in this game, Michael Gallup returns but I wouldn't actually use him yet.