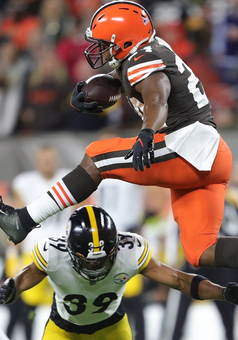 I'm not a big gambler, but I legit lay awake for an hour thinking about the last play last night. Not because of Najee being charged with a fumble that cost me a point in several lineups, whatever, but because of the resulting Cleveland defensive touchdown. Over-under and spread parlays were destroyed. FanDuel lineups with or without the Cleveland D gained or lost thousands of dollars. Crazy, and I hope you weren't among the losers.

Setting aside those bad beats -- oh yeah, I also advised against the Cleveland D in the Weekly, which looked like genius when they were sitting on one sack and no takeaways with 9 seconds left -- it was a game with both predictable elements and surprises. Let's get to it.

I'm not guaranteeing that Kenny Pickett is starting over Mitch Trubisky next week, but it's possible. This was a winnable game with better quarterback play, no question. I'm not exactly sure what strengths Trubisky was perceived to have years ago when Chicago traded up for him, selecting him over Patrick Mahomes and Deshaun Watson. I could look it up, but what's the point. He won't be starting here much longer and he will not be viewed as a starter by any future team. Decision-making is lacking, and slow. There were plays to be had (ask his routinely frustrated wideouts) and he can't make the throws. I'll set the over-under at remaining Trubisky starts this season at 2. But as noted, gambling can be painful.

On the other side of the field, Jacoby Brissett is making it look like Cleveland will be in playoff contention when Deshaun Watson's suspension ends. There are plays that don't get made because he throws late or with not enough zip and the defender breaks it up, but he's running the offense well, leaning on his best wideout (who's looking like one of the steals of the offseason), and winning -- Cleveland should be 3-0 right now. I think his days of throwing 2 TDs will be few and far between and will never start him in fantasy, but he isn't exactly looking like a downgrade from Baker Mayfield or anything.

OK, I did make one wager last night: Nick Chubb anytime scorer. Got a little lucky since it required Kareem Hunt, oddly getting a couple of goal-line carries, getting stuffed twice for it to happen, but it worked out. Chubb looks like he could rush for 150 yards every week he gets enough carries. He would have had a long touchdown run early in this one (it ended up going for "just" 36 yards) had his own lineman not gotten in his path. I suppose Hunt's presence as the involved No. 2 helps keep Chubb fresh and whatnot, but he's also an annoyance, occasionally vulturing touchdowns but more often than not (2 out of 3 weeks so far) not being usable. If he doesn't score, there's not enough catches in this modest passing for Hunt to pay off. If Chubb stays healthy.

I guess I'm one of Najee Harris's biggest cheerleaders, which I can live with. I thought the guy looked really good last night, at least for the first half. He was at 10 carries for 46 yards and a score at halftime (5 for 10 after that, with the silly "fumble"). But the offense went in the tank after halftime, with Trubisky missing some throws, the defense struggling to get off the field, and Harris catching a couple of passes that went nowhere. Final numbers weren't great, but I look at the halftime production and see a guy who's healthy and dialed in. Imagine if the quarterback were at all threatening.

Backup Jaylen Warren was even more productive with his runs, quicker than expected. If Harris misses time with injury, Warren could have some nice games. Committed a soft fumble near the sideline that won't win him any points with the coaching staff, but he's so much better than Benny Snell that I don't think we need to worry about him giving up that No. 2 role.

Got an offer for George Pickens in my dynasty league this week. I selected him in our rookie draft in May at pick 1.11. He's not going anywhere, and last night he made one of the all-time great NFL catches. Spent 10 minutes debating with my son whether it was better than the OBJ catch, a conversation I'm sure went on in other living rooms. To me it was basically the Beckham catch, but sideways. Just a fantastic bit of body control, hand strength and concentration. Spectacular. Of course, Pickens isn't usable these days because Trubisky makes throws of that sort about once every other game, but it will come, and I'm sure they're already crafting Pickett to Pickens T-shirts somewhere. Pickens (3 for 39) and Chase Claypool (3 for 35) really aren't usable these days. Talented guys though.

Diontae Johnson turned in his typical 8 for 84 type of game, also with a typical (and costly) drop in the fourth quarter. Clearly throws to Johnson 8-10 yards away are the ones that Trubisky is comfortable making, but they're not winning games. Pittsburgh could be 3-0 with slightly better quarterback play, but is probably fortunate not to be 0-3 after Cincinnati's kicking mishaps cost them the opener.

At least according to someone on Twitter (foolish repeating this, I realize) Amari Cooper was dealt because Jerry Jones was pissed about him missing two games last year due to being unvaccinated. I think his contract was a bigger reason, but talent-wise the Cowboys really, really miss him and he really, really helps the Browns. Talented guy who's put up back to back 101-yard with a touchdown receiving games with Brissett as his quarterback; I wonder who saw that coming. With Cooper cleaning up, no other Browns wideouts are remotely usable. Donovan Peoples-Jones may as well not even be on the field; how he caught 6 passes in Week 1 is going to be one of the mysteries of the season. Cleveland doesn't have another wide receiver with more than 2 catches through three games.

Hope nobody dropped David Njoku after his quiet first two weeks. Maybe the thumb and thigh injuries that limited Harrison Bryant in practice this week were significant; Bryant played half the time last night but didn't have ball thrown his way, after splitting production the first two games. Njoku was a force last night. Before you blow the waiver budget on Njoku next week I feel compelled to point out that the last time Njoku had a huge game -- 7 for 149 with a touchdown at the Chargers in Week 5 a year ago -- he followed that up the next six weeks by catching 1, 2, 3, 1, 1 and 2 passes, not reaching 40 yards in any of them. So not a great track record of stringing good games together. But hey, add him if you can, it's not like there are so many great tight ends out there.

Pat Freiermuth, in contrast, was a bloody disaster. He caught 2 passes all night, both in the fourth quarter with about 3 minutes left in the game. Hard to understand, since he caught 9 for 97 and a score the first two games. Did Trubisky forget he had him? Did the Browns blanket him, determining those are the throws Trubisky can actually make? Whatever the case, I'm confident Freiermuth will be fine, but a frustrating night.

High winds made kicking an adventure, with Chris Boswell having a perfectly struck long field goal blow wide, and Cade York missing an extra point, and Boswell nearly missing one. It's September, so the winds will probably be an issue in Cleveland in other months too, just something to file away.

Neither run defense looked good last night. Browns tightened things up in the second, while the Steelers were facing one of the league's very best runners -- underrated, really -- but I think we can confidently start running backs against both of these teams. I thought the blocking up front for Najee Harris and Jaylen Warren was encouraging, which couldn't often be said in Pittsburgh a year ago.

I know Pittsburgh was down 9 and needed to score twice, but I think they should have gone for the touchdown rather than settling for the field goal with 2 minutes left. 4th and 1 from the 21; that's going to be your best chance to get in the end zone, then maybe getting in range for a long field goal (which the wind would have made extra difficult, I realize). Teams presumably practice those lateral plays at some point in the preseason, but Pittsburgh's execution was so laughable it's not really surprising it resulted in a Browns touchdown. To the horror of most, and delight of some, partaking in games of chance.