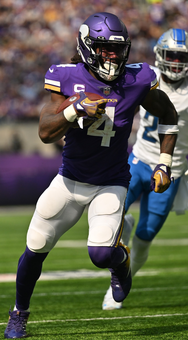 The ins and outs of Week 4

Vikings versus Saints in London: This game starts at 9:30 a.m. Eastern time, make sure to get players in or out of lineups early. No Jameis Winston or Michael Thomas. Andy Dalton starts at quarterback, Chris Olave and Jarvis Landry should be the main targets. I'm not recommending Taysom Hill as a TE flex because I don't feel comfortable that he'll get reliable touches. If you want to gamble on him, have it. Dalvin Cook plays with a harness, I'd use him pretty much as usual.

Browns at Falcons: Teams comparatively healthy, I'd use the regular starters for both. Browns might be without a few defensive players, helping prospects for Cordarrelle, Drake, Pitts (although not with a ton of confidence there). Nick Chubb definitely, Amari Cooper, Kareem Hunt. Gotta use David Njoku, I think, coming off a big game, while acknowledging he hasn't really strung good games together in the past.

Bills at Ravens: This Gabe Davis ankle injury is annoying. Is it going to bother him all season? I think I'd use him this week unless I had a really close other option, but there's some risk. I'm wary of the Bills running back committee against a usually good run defense. For the Ravens, beyond the sure things (Lamar, Andrews) you're left with some tougher choices facing a really good Buffalo defense. Rashod Bateman sure, but then tougher to make a case for other players.

Commanders at Cowboys: These teams are pretty much healthy, with the exception of Dak Prescott (out) and Dalton Schultz (questionable). I think it makes sense to leave Schultz on the bench this week, under the idea that even if he plays he'll be limited. Michael Gallup returns for Dallas. He ranked low with the thought he might not play full-time and the passing game won't be as good with Cooper Rush. I wouldn't use him, but will be interesting to see how much he plays and how involved he is so he'll maybe be an option in upcoming weeks.

Seahawks at Lions: Neither defense is particularly good, making the healthy players on both teams viable. For me this is Jamaal Williams, Rashaad Penny and the Seahawks' main wideouts. No Amon-Ra St. Brown, which would give Josh Reynolds and DJ Chark some flier appeal, but neither of those guys is 100 percent either. I'm using T.J. Hockenson and hoping he pays off, benefitting from Amon-Ra not playing. No D'Andre Swift of course.

Chargers at Texans: No Keenan Allen, giving D'Andre Carter some flier appeal, although Mike Williams should be the main target. Chargers might be able to get their ground game going here, and Dameon Pierce should also be OK, assuming he's not punished for last week's fumbles. Presumably Justin Herbert is OK to use as normal, barring a big hit of some sort. Bloom off the rose a little bit on Los Angeles, but their offense should be fine. Gerald Everett viable.

Titans at Colts: Big game in the battle for second place in the AFC South. Key players healthy. I think both teams will try to run with their franchise backs. Michael Pittman the only pass catcher to get particularly excited about.

Bears at Giants: No David Montgomery, so Khalil Herbert looks like a great fill-in. Bears don't want to pass the ball and with the Giants all the receivers they actually want to throw to are hurt, so it should be a busy day for Saquon Barkley. When the defenses are each team's 2nd-best option, well, there's not too much to discuss.

Jaguars at Eagles: One of the games of the week. Jaguars have Zay Jones questionable and best avoided, helping Marvin Jones look more like a No. 2 but mostly an upgrade for Christian Kirk and perhaps Evan Engram. Eagles won't have Boston Scott, probably helping Kenneth Gainwell see more work. Eagles passing game looks fine. Not crazy about Jacksonville's running back tandem, though I've been losing by betting against James Robinson.

Jets at Steelers: Zach Wilson returns. Am I pulling for him? Sure. It'd be nice to see the former 2nd overall pick do well rather than aged Joe Flacco. Jets have some nice offensive skill guys, would be a plus if they had a good quarterback. But I respect the Steelers D, even without T.J. Watt, so modest expectations for all Jets are best. Steelers facing a lousy defense so Najee Harris and all the main pass catchers look promising.

Cardinals at Panthers: Christian McCaffrey is questionable. I think he's playing, but makes sense he might be spelled a little more than normal. If you have him, unlikely you to have two better options, but sitting him can be considered if you have two decent ones. Reports out of Carolina that Matt Rhule has lost the locker room and you've got DJ Moore shaking his head at assertions receivers need to get open. Kind of a mess and hard to get too high on Carolina's offense, even against a bad defense. Arizona's offense not playing particularly well, James Conner, Kyler Murray and Ertz-Hollywood fine, but I'm wary the less-than-100 percent Greg Dortch this week.

Patriots at Packers: If I were still in a Survivor Pool, the Packers at home against Brian Hoyer and company would be the pick. Take that with a grain of salt since it's only Week 4 and I'm not still in a Survivor Pool. New England's defense should be competitive, but I'd use key Packers. At wide receiver that's probably Romeo Doubs and Allen Lazard this week. New England should try to run plenty, but it's a committee in what seems like a sketchy offense these days.

Broncos at Raiders: No Hunter Renfrow for the Raiders, Broncos have a couple of offensive line issues. But teams otherwise healthy. Denver defense is very good, which has maybe been counter productive for their offense putting up good numbers. I think Courtland Sutton and Javonte Williams are the viable choices, plus the usual Raiders (Adams, Waller) and Carr, Jacobs and fill-in Mack Hollins, for some.

Kansas City at Buccaneers: Bucs defense playing well and offense banged-up, so what was a high-scoring shootout in the regular season a couple of years ago should be less so this week. Mike Evans and Russell Gage look the viable Tampa receivers. Tougher situation for the Kansas City offense; I wouldn't be benching Mahomes or Kelce, obviously, but everyone else (including CEH and McKinnon) looks iffy.

Rams at 49ers: Defenses had the advantage at times a year ago, getting pressure and forcing mistakes on the quarterbacks. So a week when beyond the automatic starts (Kupp, Deebo) I'm primarily interested in the two tight ends (Kittle, Higbee) and that's about it. Jeff Wilson, in a full-time type role. Not interested in either Rams running back. Matthew Stafford looks OK; most of the offense should come from his arm.