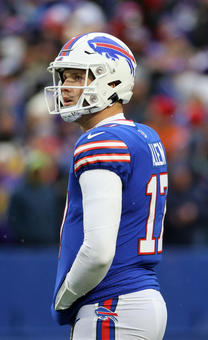 One or two of the games of the year

Pretty great day of games, from start to finish. Bills-Vikings was one of the best games of the year, and Packers-Cowboys was better, and with more offense and big games, than anyone expected. The duds from teams already playing out the string happened too, but they were overshadowed. Some disappointments, but lots of goodness.

Seahawks vs. Bucs in Germany: Score one for Tom Brady, who came out with one of his sharpest games -- as a passer, anyway, setting aside him lining up at wide receiver, tripping over the turf monster, and crashing to the earth as a Leonard Fournette pass his way was intercepted. Maybe don't have 46-year-old quarterbacks running routes, I don't know. But good game for Brady, touchdowns for Julio and Godwin. Fournette scored but also hurt late, so make sure Rachaad White (who looked really good) is rostered, he probably is. Seahawks out of sync throughout, made things close at the end but it really wasn't and Kenneth Walker didn't have much chance with Seattle down two scores much of the game.

Vikings at Bills: Maybe the wildest game of the year. Bills were moving the ball on offense all day (big game for many, including Diggs-Davis-Singletary), and at one point in position to go up 17 when they passed up a field goal. But the Vikings battled back, with Kirk Cousins and Justin Jefferson making play after play, at the end completing a ridiculous 4th and 18 where it looked like the defender, while getting both hands on the ball for an interception, might have helped Jefferson haul it in -- miraculous the ball didn't touch the ground. And it got wilder: Minnesota, trailing by 4, got down to the goal line, had a catch ruled a touchdown, overturned, got stopped on 4th and goal (drop by Dalvin Cook), got another chance when the Bills were offside, got stuffed again -- and then scored when Buffalo fumbled the ensuing snap in their own end zone. Bills marched field for a field goal, overtime, where Bills again had a chance to win (Knox couldn't hang on in end zone) before Allen forced an end-zone pick. Just nuts. Allen's elbow seemed OK.

Lions at Bears: Another wild game, and a kind the Lions lose a lot. Justin Fields had another insane rushing game; virtually unbenchable right now, should have used him in Blackout. The Cole Kmet breakout continued with 2 more touchdowns, too. But Fields also threw a Pick Six that helped the Lions get back into it, and ultimately pull it out. Big game for Amon-Ra St. Brown, touchdowns for both Lions running backs, though not many yards for Swift, again.

Jaguars at Kansas City: Jaguars were competitive in this game, and if you started Trevor Lawrence or Christian Kirk you're not disappointed. Travis Etienne held to just 73 total yards and didn't score, though. Riley Patterson missed two field goals, those were factors. Kansas City didn't have Mecole Hardman and lost JuJu Smith-Schuster to a probable concussion early; ugly, big hit, though it looked like the defender tried to stop and JSS's path after the catch just took him into him. Not a vicious hit, but an ugly outcome. Anyway, those absences helped Marquez Valdes-Scantling catch a touchdown, and Kadarius Toney too. If JJSS/Hardman miss more time, Toney looks like the main beneficiary. Biggest development at running back, where Isiah Pacheco lost an early fumble but didn't get punished, and he wound up getting 16 carries -- none for Clyde Edwards-Helaire. Six more catches for Jerick McKinnon, guess he's healthy.

Browns at Dolphins: In writing about this game I noticed Miami's offense hadn't done much at home. Well, they hadn't played Cleveland yet, and they didn't have the Raheeem Mostert-Jeff Wilson one-two punch they have right now. Big games and touchdowns for both backs, also Tua, Tyreek Hill scored (but passes spread around a little more, presumably because everyone was open against Cleveland). Mike Gesicki lost a touchdown on a nice defensive play to break it up. Donovan Peoples-Jones the best element of Cleveland's passing game, Nick Chubb a late touchdown to save his day.

Texans at Giants: This game was exactly as forgettable as you might expect. Dameon Pierce had a decent rushing game, but no touchdowns. Davis Mills with a 300-yard passing game with the Texans down two scores most of the way, but he spread things around. New York hit a touchdown to a second tight end and a huge play to Darius Slayton -- why he was inactive early in the season is hard to figure. Kenny Golladay didn't catch either of his targets. Houston actually slowed Saquon Barkley some early on, but Barkley finished with 152 yards and a touchdown. Not telling Brian Daboll how to coach, but I don't know that I'd be giving Barkley 35 carries.

Saints at Steelers: Maybe it's time for the Saints to go back to Jameis Winston? Just thinking out loud here. Andy Dalton was signed to be a backup for a reason, but Winston can't be worse. Probably. Taysom Hill (that's not happening lately) might even be worth a whirl. Anyway, Juwan Johnson catching a touchdown was the lone New Orleans highlight. For Pittsburgh, a pretty solid game for Najee Harris, too bad both short rushing scores were by his quarterback and wide receiver George Pickens on an end-around near the goal line. Modest passing games, and an ugly one to watch any of, you're welcome.

Broncos at Titans: Another week, another sad offensive performance by the Denver Broncos. Credit to the Titans Defense, which is really good, but it's the same story week after week after week. Jerry Jeudy leaving early with an ankle injury was obviously significant, but we've seen this song with Bronco Russell Wilson many times. Broncos did a surprisingly nice job on Derrick Henry, their defense is great, but Tennessee hit a couple of pass plays to Nick Westbrook-Ikhine (one on a flea-flicker) and 17-20 points is usually enough to beat the Broncos these days. I'll be at next week's thriller against the Raiders. Yay? These last two games featured teams barely playing the same sport as Bills-Vikings.

Colts at Raiders: So Matt Ryan returned as starting quarterback, with Jeff Saturday reversing course on the Matt Ehlinger decision (which he indicated would continue at his opening press conference). I guess Ryan's veteran savvy and knowhow was key to the Colts getting the win, although the Raiders just continue to look like a team only semi-interested in things, seldom putting together four good quarters. Good games from Davante Adams and Josh Jacobs, and Foster Moreau had a nice diving touchdown grab. But Jonathan Taylor's return and a breakaway touchdown run probably had more to do with the outcome than the quarterback decision. Parris Campbell and Michael Pittman had good or serviceable games, better than with Ehlinger anyway.

Cowboys at Packers: Great game, with Christian Watson hanging onto a long touchdown early, then building on it with a huge, breakout day. Dallas offense was also clicking with Dak Prescott and CeeDee Lamb lighting up Green Bay's top-ranked pass defense, Dalton Schultz and Tony Pollard also scoring. But Green Bay battled back to force overtime, with some late drama involving Aaron Rodgers yelling at his coach after a failed third-down play (you could have easily run for the first yourself, man) and then Dallas passing up a long field goal in overtime to go for a fourth and 4 they didn't convert. Prescott, also, could run a little more than he does most games. Big game for Aaron Jones, too. One that got away for the Cowboys, one that Green Bay had to have.

Cardinals at Rams: So Cooper Kupp left with an ankle injury (maybe he came in with one?) after catching 3 passes for negative yards. In his absence, Tyler Higbee had a good game, Van Jefferson caught an utterly meaningless touchdown, and Colt McCoy won the battle of the backup quarterbacks. Kyren Williams came off IR to catch 3 passes, but Darrell Henderson scored (Cam Akers a barely used nonfactor, as usual). James Conner had a great game, hope you didn't bench him on the Kyler Murray absence. Both DeAndre Hopkins and Rondale Moore put up the same numbers with McCoy as they'd been doing with Murray, albeit no touchdowns.

Chargers at 49ers: After a fast start, with the Chargers scoring a touchdown on their opening drive and the 49ers driving down for a short field goal, this one disappointed. San Francisco went run-heavy (with Elijah Mitchell the hammer, somewhat surprisingly), killing production for most pass catchers. And the Chargers started without their two best receivers and lost Gerald Everett, who looked like he'd be involved, along the way. I think there are some who think Justin Herbert is overrated, and I guess his lesser numbers won't change any minds. But I watch him play and think how much better he'd be if his receivers would consistently catch the damn ball. Josh Palmer, I'm sorry, he's not that good. Turning in the occasional good game when the team's top 2 wideouts are hurt isn't good enough; he comes up small more often than not, either not getting to or not hanging onto good throws. The fact that journeyman DeAndre Carter often looks better is telling. Maybe there's a Brandon Staley problem, too. In any case, Chargers offense underachieved across the board -- very good San Francisco defense, but there were opportunities that weren't taken advantage of.

Monday, Monday: Should be a lopsided Eagles win, but stuff happens. The Washington defense has been better than expected in a lot of recent games, and the earlier meeting was just 24-8. Probably a lot of matchups riding on some key Eagles performances. I'm not expecting much out of Washington's offense. Call it Philadelphia 27, Washington 17.