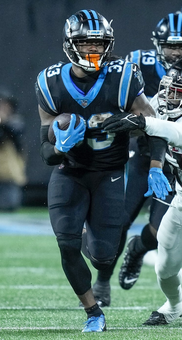 That one kind of sucked. Rain and wind from Hurricane Nicole certainly didn't help the passing or kicking games, although the Falcons finished with better passing numbers than in most games, and the run-favored approach worked out great for Carolina. Let's slog through this one.

Clearly neither of these teams is starting a quarterback who will be starting for them next year. The old saw about why cornerbacks aren't wide receivers cropped up multiple times for both teams, with both Marcus Mariota and P.J. Walker hurling inane throws to well-covered receivers downfield that were dropped by defensive backs plainly between the intended targets and the ball. I guess that stuff evened out, although if you started either defense it would have been nice if they'd held onto all of those interceptions. They certainly had opportunities.

Mariota was the better fantasy option, surprisingly throwing for nearly 200 yards and 2 TDs, while running for 43 more. Some of that production was with the offense down two scores, and Mariota should have thrown more than 1 interception; the one that was was simply a crazy downfield heave on second down that led to a field goal for Carolina. Sadly, the Falcons remain in the NFC South division title hunt, so we're probably stuck with Mariota rather than rookie Desmond Ridder for the next few weeks. But it's debatable whether Ridder could be a downgrade. Mariota kind of looks like he's just doing a job. I don't want to judge him, but I'm not seeing a ton of passion there.

Walker had an interception dropped in the end zone on Carolina's opening drive, where he just tried to force one into a well-covered D.J. Moore. He also had a near Pick Six along the way. But no actual interceptions, and he handed the ball off well. He was a little unlucky in that Laviska Shenault's 41-yard touchdown came off a backwards pass, and was ruled a run. Not that even that would have made Walker a good fantasy option, in the rain with the ground game clicking. I avoided Walker against the league's softest pass defense not because of the weather but because I thought he was at risk of an in-game benching. I think that remains the case going forward.

Those holding out hope for Cam Akers and I suppose James Robinson in dynasty leagues can take to heart the way D'Onta Foreman has been killing it lately. The sobering thing to keep in mind is that Foreman's Achilles injury was four years ago, so it took him a little while to put it fully behind him. But he played well last year and I had him on watch lists (and on a dynasty roster) in multiple leagues this summer and September, thinking he might be very good if Christian McCaffrey happened to get hurt. Instead he got traded, and Foreman is indeed very good. He was ripping off good yardage all night, a reminder that while Atlanta's defense is better against the pass than the run, it's not actually any good (the ground games Atlanta stifled are bad, bad, bad). That's three 118-plus rushing yard games in the last four for Foreman, with the exception the blowout at Cincinnati where he had no chance. Looking like a regular starter, at least as matchups allow (ones where the Panthers won't likely get blown out).

Chuba Hubbard is a lesser change of pace; might not be better than Raheem Blackshear. But neither of these backs will do anything with Foreman healthy. Blackshear might offer a little more quickness in the open field and should probably be the passing-downs back over Hubbard. But regardless, only Foreman has value.

Bitterly disappointing night for those who started Cordarrelle Patterson. From the outset, the Falcons seemed to think he could best help the team on returns. Weirdly, since he's been their best running back when healthy. Patterson did look explosive on those returns, because he is. Him breaking one didn't seem to be out of the question. But getting hurt while crunched into a pile of tacklers was also on the menu.

I knew it would be a committee backfield, but Patterson leading it, or at least co-leading it with rookie Tyler Allgeier, seemed the reasonable way they'd go. Instead it was a FOUR-man backfield, with Caleb Huntley and Avery Williams, for some reason, getting about as many carries (all four had at least 4 rushing attempts). They threw Patterson one pass, a 2-yard curl in-bounds before the half that went nowhere and almost prevented the team from kicking a short field goal, since they had no timeouts. That was still better than Allgeier's usage in the passing game; he caught 3 passes behind the line of scrimmage that all went for negative yards -- his "long" was minus-5. Think they might be tipping those plays, or perhaps expecting Allgeier to run over multiple defenders (that Patterson would be more likely to do).

In any case, I can't see Atlanta watching the film of this game and thinking their backfield usage was effective, so hopefully it will be back as a Patterson-Allgeier committee going forward. But very difficult to start Patterson after seeing his usage here. Befuddling really, but he looked good on kick returns.

Lumping these guys together since there's so little good to actually say. DJ Moore is Carolina's marquee option, and he had a couple of nice grabs at the sideline early on. Walker completed only 10 passes, so what are you going to do, but he at least caught 4 of them. His end-zone look was a joke that should have been picked. Terrace Marshall has been a credible No. 2 of late, and might have been in this one if he'd had more passes thrown his way (a 43-yard catch on 2 targets). Presumably driving rain won't be a factor the next time Carolina takes the field.

Laviska Shenault and Shi Smith are the guys behind the top 2, and Smith has some good games, Shenault others. Shenault has two 5-touch games in his last three, one with 5 catches and last night with 3 grabs and 2 runs, although the touchdown run was actually a swing pass that he happened to catch behind his quarterback so it went in the books as a run. I guess there's some nominal PPR value there (Shenault is a talented guy) but he's not actually playing that much (30-40 percent of the time in his two good games). Not seeing him as a recommended pickup.

Tommy Tremble didn't catch the only target thrown his way, because he wasn't even looking for it; I believe it hit him in the shoulder. If you're starting a Carolina tight end based on their 1-2 catches per game, I'm not sure what to say. Once every few weeks he'll catch a touchdown, but more often he'll have passes caroming off his body parts or not even be targeted.

Drake London had a better than expected game, at least in PPR (5 catches and a touchdown). He's been fine, it's just that his quarterback isn't any good and the team would prefer to run the ball. This also applies to Kyle Pitts, who is of course more disappointing because he was drafted earlier and is supposed to be an otherworldly talent. Theoretically averaging 6 targets per game is respectable...but they're not good targets, and the offense isn't scheming him into space or open downfield. Frustrating.

There was a string of games where Olamide Zaccheaus had some production. I've actually had to start him some weeks in a league where my wide receiver choices haven't panned out so well for one reason or another. But that's gone. Zaccheaus in his last three games has caught 5 passes for 63 yards. That's barely a serviceable single week in PPR; it's a brutal three weeks. Damiere Byrd now looks like the slightly better option (3 for 58 last night; 3 for 67 with a score in the other game against Carolina). But he played just as often against the Chargers last week without catching a pass. KhaDarel Hodge caught a touchdown last night. He played 8 snaps. In a passing game averaging 175 yards, these guys are as missy as hit or miss options get.

Kickers combined to miss 3 extra points, at least some of which we'll blame on the weather. Eddy Pineiro, whose misses were why Carolina split rather than swept this series, made all 4 field goals, although one caromed in. The Carolina defense worked out with its 5 sacks, Atlanta (1 sack) didn't, but they weren't expected to (and Carolina not passing much made for even lower upside). The interception potential was high, and but for the drops would have worked out pretty well. These teams have bigger fishes to fry when fixing things in the offseason, although the Falcons obviously need to add some defensive talent, instead selecting skill guys like Pitts and London who they're underusing.

Not the best matchup or game, but we're getting used to it on Thursdays this year.