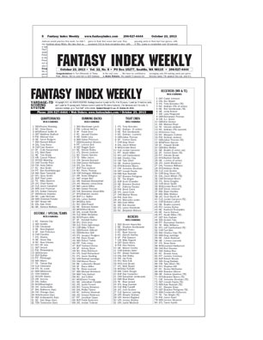 The Week 11 edition of Fantasy Index Weekly is available

DALLAS (vs. Minnesota)
The Vikings are 8-1, but moving the ball and scoring against their defense hasn't been a problem for most offenses. Minnesota has allowed 3 touchdowns five times in eight games, and over 400 total yards five times ...

... as well. The game will probably be higher-scoring; the over-under of 47.5 is one of highest of the week. Dallas won 20-16 at Minnesota last year, and a higher-scoring game (31-28) the previous season. ... Dak Prescott missed both of those previous meetings; he put up big numbers (397 yards and 3 TDs) in a 28-24 loss in 2019. He hasn't been great this season, averaging 214 passing yards, with just 6 touchdowns in four starts, but has at least put up his best numbers lately. The last two weeks he's averaged 258 passing yards and thrown 5 TDs, adding another 40 yards and a score on the ground. His poorest game since returning ...

This report is taken from today's Week 11 edition of Fantasy Index Weekly. The newsletter includes our player rankings and 20 pages of matchup previews, plus stat projections and custom rankings for the games being played this weekend.

... from injury (207 yards and 1 TD) was with the defense totally shutting down Detroit, and that's unlikely to happen here. Minnesota ranks 30th against the pass, and since frustrating Aaron Rodgers way back in Week 1 has given up good or great numbers to all the better passers they've faced (and also a pair of Dolphins backups). (Excluded: Dalton, Fields and Heinicke.) Touchdowns include rushing scores.

Prescott didn't actually play great at Green Bay, completing under 60 percent, but he still threw for 265 and 3 against a defense ranked No. 1 against the pass coming in. Prescott hasn't been running much (under 13 yards per game, with 1 TD) but they used him on a lot of short-yardage carries at Lambeau, an indication he's in play as a goal-line option. ... With Ezekiel Elliott (knee) a gametime decision last week, he'll probably return for this one, and it will be a tandem backfield with Tony Pollard. Pollard has been pretty awesome in a featured role the last two games, rushing for 115-131 yards in each, with 4 touchdowns. But he had also put up at least 86 total yards in four of his previous six coming off the bench, with 2 TDs, and with the way he's performed in the last two, and with Elliott sidelined the last three weeks (including a bye), would be reasonable for Pollard to have an even larger role. Elliott is still likely to get more carries around the goal line, and he's been productive, averaging 63 rushing yards, and with 4 touchdowns in seven games. Definitely a one-two punch, and both have value in this matchup. Malik Davis (averaging 40 total yards the last two weeks) would be the change-of-pace if Elliott doesn't return. ... As the clear No. 1 and seeing double-digit targets in a majority of games, CeeDee Lamb has been a disappointment. Prior to Green Bay he'd caught only 4-5 balls in four straight, for an average of 67 yards, and with just 1 TD. But he put the offense on his shoulders last week, catching 11 passes for 150 yards and 2 TDs; might have been interfered with on a potential game-winning drive in that one. Opposing top wideouts have shredded this defense lately, with four different players (Hill, Waddle, Hopkins, Diggs) going over 120 yards in the last four games, and three other good ones (Rondale Moore, Curtis Samuel, Gabe Davis) catching touchdowns. A productive No. 2 here is less certain, however, with multiple possibilities. Michael Gallup hasn't reached 50 yards in any of his six games, and he's scored just once. Noah Brown is playing close to full-time but has only one game with more than 1 catch since Week 4. The matchup suggests one of these players has potential, with Gallup the best bet, but it hasn't been happening for him (4 for 35 even with Prescott attempting 46 passes at Green Bay). ... Dalton Schultz, instead, looks like the best bet after Lamb. In their four healthy games together, Schultz has caught 24 passes for 239 yards, with 1 TD -- at least 5 catches for 49 yards in all of them. The Vikings have allowed 4 touchdowns to tight ends, with a near-miss to Dawson Knox last week. ... Brett Maher averages 7.4 points, and if you're confident Dallas will win, he should be projected above that. He's averaging 9 in the team's six wins, just 4 in three losses. The Vikings (who have lost just once) are allowing just over 6 per game. ... The Cowboys Defense leads the league in sacks (35) and is 7th in takeaways (15). Kirk Cousins has been remarkable in terms of pulling out wins with late drives, but he hasn't been error-free. He's thrown 8 interceptions, so good chance the Cowboys get an opportunity or two. Cousins has taken 20 sacks, so just over 2 per game, but he's taken at least 3 in four of his last six. KaVontae Turpin is as likely as any returner in the league to take one the distance, though such scores are rare these days.