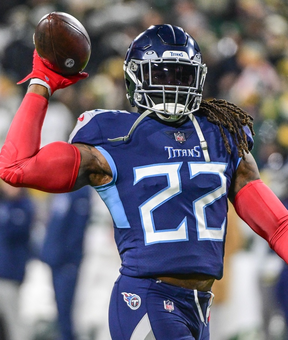 Christian Watson followed up his breakout game with 2 more touchdown catches, yet wasn’t even the most impressive rookie receiver on the field. Observations from the first game of the Week 11 slate:

Treylon Burks might finally be arriving. Burks hasn’t done much yet. He’s been the least impressive of the first-round receivers who’ve played. But he put together the first notable game of his career in this one. He opened it with a 44-yard catch on the first third down, and he sealed it with a 51-yard catch just before the two-minute warning. In between were 5 other catches, with Burks finishing with 111 receiving yards. Looks like he’ll probably be Tennessee’s most productive receiver for the duration of the season.

Robert Woods can still play. Woods isn’t as big or explosive as Burks, but he can still play. He’s got a big edge in experience, and he had his best game as a Titan in this one, catching 6 of the 7 passes thrown his way. There will be some games during the rest of the season that he finishes with better stats than Burks. In this one, Woods, Burks and Nick Westbrook-Ikhine all logged starter-type roles. (That was my impressive; I haven’t seen the official snap counts yet.)

Chigoziem Okonkwo strikes again. The rookie tight end busted loose for a 48-yard gain at KC. He had a 41-yard catch against the Broncos. And he had a 31-yard catch in this one. I don’t think he merits a waiver claim in a fantasy league (not enough usage) but it’s rare to see a tight end have a 30-yard catch three games in a row. Looks like a guy who’ll be sticking around in the league for a long time.

Mike Vrabel’s timing. The Titans had the key long touchdown against Denver on a flea-flicker. In this one, Derrick Henry pulled up to throw a jump-pass touchdown to Austin Hooper. Right now, Tennessee seems to have the best feel in the league for when to pull out a trick play.

Dontrell Hilliard catches another touchdown. Dontrell Hilliard caught 2 TDs in the opener against the Giants. He caught a touchdown at Washington in Week 5. And he caught another one tonight. He’s caught twice as many touchdowns as anyone else on Tennessee’s roster. I have no interest in rostering Hilliard, but thought I should point that out.

Austin Hooper is coming on. Hooper didn’t do much of anything in the first five weeks. He’s come on some since that time. He’s gone over 34 yards in four of his last five games and caught his first 2 TDs of the season in this one. I don’t have much interest in him, but I suppose a case can be made that he’s worth a roster spot as a second tight end in a 12-team league.

Christian Watson holds serve. Watson didn’t crush it on Thursday night. There was one short throw that I think will be scored as a drop (I’m not positive – we’ll see). And there was a bomb in the second half that traveled 55 yards in the air. Watson had the positioning to box out the defensive back and make that catch, but he didn’t judge the ball properly. This wasn’t a drop, but I think a bunch of receivers with Watson’s size and ability would make that catch. I take these plays as evidence that he’s still a work in progress. But he caught another 2 TDs, underscoring that he’s an up-and-coming talent. He used his height to pull down one throw in the end zone; that one was pretty cool. On the other, he ran across the coverage in the red zone in the same way he did on one of his touchdowns against Dallas. That second touchdown looked like it was drawn up for him all the way, and I expect he’ll be seeing more red zone looks in the future.

Randall Cobb isn’t finished. Cobb’s best days are way back in the rearview mirror, but there is a rapport between him and Aaron Rodgers. Rodgers trusts him. Cobb caught 7 passes for 99 yards in a game against the Giants earlier in the year. In this one, Cobb came off IR and caught all 6 of the passes thrown his way. Should not be on a fantasy roster, in my opinion, but he’ll be a contributor in some games.

Allen Lazard is just a guy. Heading into this season, I expected Lazard to be Green Bay’s featured receiver – its No. 1 guy. That’s not happening. With Watson emerging, and Cobb capable of chipping in some receptions, Lazard is just a contributor now. He didn’t play well in this one. He dropped a pass, and there was an end zone throw that was similar to the first Watson touchdown that some receivers would have come down with. It wasn’t a drop – it was a heavily contested situation – but the big-time receivers come down with some of those throws. Lazard can’t do that. He caught only 5 of the 11 passes thrown his way in this one, for 57 yards.

Time for Jordan Love? Aaron Rodgers didn’t play well in this one. Not that he was awful, but he missed a couple of throws. And the Packers lost one they needed to win, dropping to 4-7. That pretty much finishes off any flickering playoff hopes, and with that in mind, it’s reasonable to wonder how much longer it might be before the Packers take a look at Jordan Love. Green Bay is at Philadelphia and at Chicago for its next two, followed by a Week 14 bye. It would not be a surprise if they come back for those final four games with Love as their starting quarterback.

And that’s probably a good place to end it.