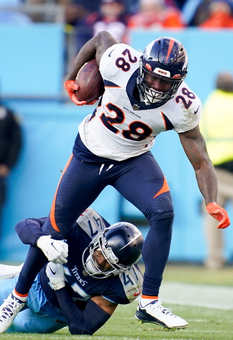 A Latavius for the rest of us

Broncos at Panthers: So I'm actually recommending Latavius Murray. Never thought we'd come to this point, but it's him or Marlon Mack, the Panthers are weak against the run, and the Broncos have to be as tired of seeing Russell Wilson drop back and try to hit his thin receiving corps as those of us unfortunate enough to watch all these games. Bit of trivia, about the best game of Sam Darnold's career was against the Broncos, while he was with the Jets, a game my Broncos fan son and I attended. So I'm not going to be surprised if Darnold plays better than expected. But probably a lower-scoring game. Murray, Sutton maybe Dulcich, Foreman and Moore for Carolina.

Buccaneers at Browns: Rain could be a factor in this game, it's supposed to rain throughout. And with Leonard Fournette doubtful, both situation and matchup look very good for a Rachaad White breakout game. You can see the rankings, you don't really need to ask me "should I start White over...?" If you have him, you should start him. Nick Chubb obviously, and the key wideouts and Brady against a Browns defense that gives up a whole lot of production.

Ravens at Jaguars: Not a lot of players to love in this game. Committee backfield for Ravens. Very tough matchup for Jaguars. Guys like Lamar, Andrews, Etienne and Kirk are in lineups, everyone else looks pretty iffy.

Texans at Dolphins: Nothing special about Miami defense, though it has generally played well at home. I'm starting Dameon Pierce, but don't have any interest in anything connected with the passing game. We've seen Kyle Allen play, he's not going to be dramatically better than Davis Mills. For the Dolphins, no Raheem Mostert, so great, great week to use Jeff Wilson (and it was anyway). And no one needs help starting Tyreek-Waddle-Tua, they'll get theirs too.

Bears at Jets: Someone's been through here with the ugly stick. Good chance we get Trevor Siemian versus Mike White in this game. As a result, the best options look to be David Montgomery and Michael Carter. Also it's supposed to be raining throughout, just in case going to see a Bears-Jets game without Justin Fields playing wasn't bad enough. Cole Kmet, Darnell Mooney and Garrett Wilson earn consideration, somebody has to catch passes from these quarterbacks. My two cents on the Jets quarterback situation is they should probably start Joe Flacco, and maybe they will be after this one.

Bengals at Titans: No Joe Mixon, so Samaje Perine is your fill-in. He's not going to put up big rushing numbers and he's not scoring 3 TDs again, but he will catch some passes. If JaMarr Chase is active, and it sounds like he will be, you use him, but there's a little bit of risk. Derrick Henry, Tee Higgins, Joe Burrow, yes. Kind of a big AFC game I guess, aside from Tennessee having zero chance of not winning the AFC South.

Falcons at Commanders: Rain might also be an issue for this one. Nice matchup for the Commanders offense and I'm signing off on the key starters and No. 2 guys. Except for Logan Thomas, who finally had a good game but is apparently hurt now. For Atlanta, it's a tough matchup, I think Cordarrelle Patterson is OK to use but not great. We have very little interest in the Atlanta offense.

Chargers at Cardinals: Should be more offense than defense in this one, as the rankings suggest -- I don't think we could rank the key starters much higher. Mike Williams out, but Keenan Allen and Gerald Everett good to go. Kyler Murray returns, as does Marquise Brown.

Raiders at Seahawks: So Josh Jacobs cropped up as questionable on Friday, apparently picking up an injury at practice or maybe getting in a scrum at the local Apple store, I don't know. I have no inside information here, but I have Jacobs everywhere and will be scrambling if he doesn't play. Should be more information today or tomorrow (if he's really hurt he won't travel with the team and be ruled out today). Fingers crossed on Jacobs. If he's out, I'd be hesitant to count on Zamir White (could be a committee with Abdullah, Bolden). Seattle offense should be fine, as should Davante Adams.

Rams at Kansas City: This one could be ugly, with the Rams half-heartedly slopping out onto the field whatever they deem healthy enough to play and Kansas City probably steamrolling them. I would use key KC players. For the Rams I'm considering Allen Robinson and Tyler Higbee, assuming they're active, but not with great enthusiasm. Kyren Williams a desperation choice, and I suppose if you believe in Cam Akers, you can use him. Should have an exhibition feel for Los Angeles, but players have pride and stuff and if they're on the field they'll be trying hard. But I don't think anyone should get too excited about using any Rams players the rest of the season. Sorry.

Saints at 49ers: One of these teams is cruising toward the playoffs, the other plays in the NFC South where there's potential to do so. Chris Olave and Alvin Kamara are the interesting Saints, and Juwan Johnson has been productive enough lately that he merits consideration. Deebo Samuel is the key health question for San Francisco, he's a little banged-up (maybe all the running usage, just a theory), making him a little risky, you have to at least make sure he's active and see what the pregame talk suggests. I've said enough on my lack of regard for Taysom Hill at this point. Might be a good game but I'd rather use San Francisco players.

Packers at Eagles: I don't know if Aaron Rodgers has a broken thumb or not. I do know that Brett Favre played through one of his worst seasons with a broken thumb, maybe it was 2002 or 2004, one of those. That Rodgers, trying to copy Favre and stuff. As for this game, Eagles have been pretty ordinary of late, so no more assuming they're just going to come out and put up big numbers. I'll use the starting running backs and main wideouts for both teams, and Hurts obviously. And hope for a good game.

Steelers at Colts: Maybe this seemed like a good game when they drew up the schedule. Some fantasy appeal in both main running backs who should play close to full-time, and the main wideouts from both teams too. Maybe we'll see a nice George Pickens grab (but I wouldn't mind if announcers referenced OBJ a little bit less, yes he's a free agent and yes he made a great catch back in the day, we know). Pat Freiermuth should be busy, and both defenses are start-worthy too. Glancing ahead at the schedule I see an even worse Monday night matchup coming up (Packers at Rams), but tough to blame the schedule-makers for think that would be good.