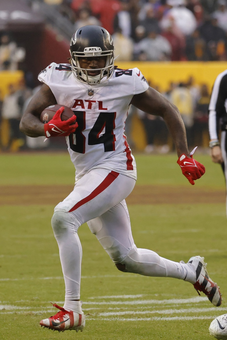 What follows is a brief look at all the games with how I'd react in my own lineups to injury developments or other news. The official rankings are the ones in the Weekly. Those take precedence. But sometimes players are very close, and in those cases I'm glad to offer opinions on how I'd approach those situations. Sometimes I like certain players more or less than Ian, and sometimes I have different risk tolerance with injuries etc. If I don't get to your question, either I missed it (it happens) or the rankings are very clear. OK, on to the games!

Steelers at Falcons: Najee's playing, so everyone who picked up Benny Snell didn't need to (plus, he's Benny Snell). Jaylen Warren might also mix in. Inactives will need to be checked Sunday morning, but sounds like Pittsburgh will have its top running backs, and the three main pass catchers look reasonable. For Atlanta, Cordarrelle seems to be the decent option.

Broncos at Ravens: Courtland Sutton is apparently sick (so is everyone who's been watching the Broncos). I really can't recommend any Denver players anyway. For Baltimore you've got Lamar, Mark Andrews and Gus Edwards as the viable choices. And the kicker and defense, obviously. If there's a game this week where no wide receiver on either team does anything remotely useful, this is the one.

Packers at Bears: When working on the Weekly Wednesday I was proceeding as if Justin Fields wouldn't play. Shoulder injury that kept him out last week and a bye next week seemed to make that a reasonable approach. Apologies for that, guess it was just a one-week shoulder issue and Fields is fine to use. It seems like he wouldn't run as much this week given the negatives of taking any big hits with a bum shoulder, but I guess that's better than throwing the ball. David Montgomery, Cole Kmet and Fields look like the options. For the Packers I like both running backs, and Christian Watson has the appeal of being fiery hot these days. But that's about it.

Jaguars at Lions: Travis Etienne is apparently good to go, so so much for the JaMycal Hasty recommendation. With the Lions, the matchup is great, but it's hazy who the No. 2 receiver will be, and it might be a three-man backfield, making D'Andre Swift a riskier choice than he would be if the Lions could be counted on to put him on the field half the time. In general, neither defense is good and both offenses should move the ball and score plenty, but a little bit of uncertainty beyond the No. 1 wideouts and running backs on each team. I'm using Trevor Lawrence.

Browns at Texans: Any storylines on this game I should touch on? To start, both teams really bad against the run, so Nick Chubb and Dameon Pierce are locked into lineups for me. As for Deshaun Watson, I think you've got some motivation on both sides, both from him to do well in front of the jeering fans and from the team to shut him down. If you're someone who's rostered Watson these past 11-12 weeks, though, isn't a matchup with one of the league's very worst defenses something you've done that for? I wouldn't start him over the guys ranked ahead of him, but wouldn't be afraid to use him if I'd burnt a roster spot on him all this time. Yes on Amari Cooper, no on every other pass catcher that will be in uniform for either team.

Jets at Vikings: No Michael Carter, so letz go with zomething different and have a Zima, I mean Zonovan Knight. I would also use Garrett Wilson and perhaps Tyler Conklin. For the Vikings, it's a tough opposing defense, but at least targets tend to be concentrated among relatively few players: Jefferson, Cook, Thielen and Hockenson.

Commanders at Giants: It's weird how the Commanders defense went from being a sieve the first couple of weeks of the season to one you don't want to start players against. But it's easier this week because the Giants only have one player you want to start anyway. Worse with their top wide receiver, Darius Slayton, iffy. For Washington, Brian Robinson looks good, Antonio Gibson iffy. Terry McLaurin worth using and the Washington defense too.

Titans at Eagles: Tennessee defense is good enough to cause problems at times for Philadelphia. Not that I'd be sitting the key starters, but Miles Sanders in particular doesn't look as good. For Tennessee, it's facing a defense missing a couple of key starters. Derrick Henry looks fine anyway and maybe Treylon Burks fares OK, but I wouldn't go much deeper into their skill guys. Pretty important game for both playoff pictures.

Seahawks at Rams: What marginal backups will the Rams slop onto the field this week? Kyren Williams is the only player I would even consider for a lineup spot. Thumbs up on every notable Seahawk starter. I'm spot-starting their defense too.

Dolphins at 49ers: Fun game with a couple of playoff teams squaring off. There's a good chance of rain, not that I'd be sitting any key passing game components. San Francisco tough on the run so I'd hesitate before starting Jeff Wilson. Christian McCaffrey good to go so the Jordan Mason or Tevin Coleman debate is probably moot. Shame this isn't the primetime game.

Kansas City at Bengals: Should be a high-scoring affair. Two injury questions with Cincinnati. One is Joe Mixon, who has not yet cleared the concussion protocol. We should know by Sunday morning, but we don't know now. If he's out, I'm fine to use Samaje Perine. The other question involves JaMarr Chase. Assuming he's active, gotta use him. We've also got JuJu, Tee Higgins, Isaiah Pacheco and Hayden Hurst fairly high.

Chargers at Raiders: Expecting plenty of offense in this game, too, with neither team any good defensively. Josh Jacobs should be fine, but I suppose one needs to check the inactives just in case. Main wideouts for both teams viable, tight ends also in the wasteland that is that position. Quarterbacks also. Yet another game that could have been flexed into primetime rather than...

Colts at Cowboys: OK, I know Dallas is America's Team or whatnot. But I see no less than three games at 4 p.m. eastern that could have been flexed into this time and been more appealing than yet another Colts primetime game. I understand networks are able to protect some games. But not multiple games, and this matchup would probably be about the 8th or 9th best one that could occur. Anyhoo, the running backs for both teams look good, and also Prescott-Lamb-Schultz. Pittman sure, I'll pass on Campbell after getting burned last week and would not wade into the Colts' tight end committee. Thumbs up on the Dallas defense.

Saints at Bucs: I'm really perplexed as to why Andy Dalton is the New Orleans starter. He's terrible. Earlier I thought Jameis Winston was hurt with broken bones in his back or somesuch, but he's been active as the backup, so presumably he could play. I don't get it. Whatever. The Bucs will use a running back committee, making neither particularly desirable. The main wideouts look fine, plus Chris Olave for the Saints. Juwan Johnson probably not available. My opinion on Taysom Hill is unchanged. Few players are added and dropped more in fantasy leagues this year than Hill, who has a good game every three weeks, gets picked up, does nothing and gets dropped, lather rinse repeat. One of these teams is likely going to win the NFC South and host a playoff game, maybe the Bucs will essentially clinch here.