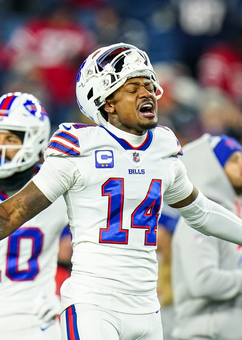 Big win for Buffalo, and a sobering loss for New England. Afterward Kendrick Bourne ripped the offense, so perhaps he'll be off the roster by the time you read this. He's right of course, which is the only conclusion to take from an offense whose only touchdown was by a defensive player. On to the recap.

Modest outing for Josh Allen, which can be somewhat chalked up to New England's inability to mount much offense themselves. It was a cold night in Foxborough which also might have contributed to keeping scoring down, and a reminder that Allen is probably going to be negatively affected by conditions the rest of the way. Buffalo's remaining five games are in Buffalo, Buffalo, Chicago, Cincinnati and Buffalo. Some of those games will probably be higher scoring (the Bears defense is terrible, the Bengals and Dolphins may be able to make things into a shootout, if weather is OK) but more games like last night might be on tap. Troubling for those who have got this far with Allen one of the key performers.

Allen's elbow seemed fine in this game. A couple of perfect touchdown throws, one an across the body dart while in midair headed out of bounds, and an even better bomb to Stefon Diggs that was erased by a holding penalty. Disappointing that he didn't run much, but in retrospect smart -- why expose yourself to extra hits against an offense that can't mount any kind of scoring threat? I don't love Allen against the Jets next week, but weather permitting he'll probably be fine against the Dolphins and Bears the next two weeks.

You don't hear so much about how lucky the Patriots were to land Mac Jones in last year's Draft these days. Maybe he misses Josh McDaniels (it'd be hard to imagine a worse offensive coaching staff than Matt Patricia and Joe Judge), and maybe defenses have correctly figured out his limitations. Eight days ago he threw for 382 yards and 2 TDs, so maybe too soon to write him off. But in his other eight games he's thrown 5 touchdowns and reached 250 yards twice. Some of his missed connections, and a should-have-been interception that was reversed on review, were entirely Jones' fault. It's fair to wonder whether Bailey Zappe would be better, and a switch at some point can't be entirely ruled out. The guy is not a very good quarterback, or at least the current offense is making him look that way. Jones was griping at the coaches on the sidelines last night, and it's hard to blame him.

Jones' next three matchups all look good or great: at Arizona, at Las Vegas, versus Cincinnati. Might be hard to much up a couple of those; there will be some productive games there. And in fairness he's working with a pretty modest receiving corps. But the post-Brady Patriots have joined a lot of the rest of the league's teams in having quarterback questions, and no certain answers.

Rhamondre Stevenson is the best thing this offense has going right now. Kind of feels like they should use him a little more: he's had a total of 17 carries the last two games. Stevenson fumbled twice early last night, which was kind of unusual, and perhaps a younger Bill Belichick would have sent him home from the game in tears with his Mom. But the Patriots don't have any other viable running backs these days, with Damien Harris hurt, and that was highlighted by last night's biggest play being turned in by a rookie defensive back, who took an easy screen for a 48-yard touchdown. Anyway, as a runner Stevenson is consistently breaking tackles and dragging defenders 5-7 yards downfield. And as a receiver he's caught 39 passes the last six games. Harris showing up on crutches with a hip injury makes me think we might not see him again this year, and Stevenson will continue to rack up a dozen points a week strictly in the passing game.

The Bills' usage of their running backs is frustrating. Some weeks they seem set to make Devin Singletary a workhorse. Others, like last night, they give James Cook more carries and randomly stick Nyheim Hines on the field for a third of the snaps, but give him only 3 touches. Cook looked good, and wound up with 1 more carry than Singletary, plus a huge passing game role -- 6 catches for 41 yards, while Singletary didn't catch either of the passes thrown his way. One was an early, ugly drop, which maybe influenced Cook's large role in this area. If he's available in leagues, and he probably isn't, he needs to be added.

But will it continue? Cook rushed for 86 yards in the win over Cleveland, then barely played at Detroit on Thanksgiving. It would be nice to look at last night as a breakout game (unless you have Singletary, I guess) but I'm not sure it can be counted on. Going forward, I'm expecting a Singletary and Cook committee, but it's going to be nerve-wracking putting either player into a Week 14 lineup.

In the Weekly mention was made of how the Patriots have a reputation for taking away opponents' best player, but how that hasn't really been the case this year, or with Stefon Diggs. And indeed, Diggs had a big game that would have been even bigger but for a 41-yard touchdown being erased by a holding penalty. Next week he'll see a lot of Sauce Gardner, but I will take my chances with Diggs.

Is Isaiah McKenzie the de facto No. 2 wide receiver right now? He's caught 11 passes for 140 yards and a touchdown the last two weeks. Last night's 5-catch game required other non-running backs besides Diggs doing absolutely nothing, but he looks strangely reliable these days. On the other hand, Gabe Davis. Scored last night, but it took an incredible play by Allen and he caught only 1 other pass on his 7 targets. There's always big game potential, but it might take someone actually shutting down Diggs for him to really hit. Maybe against the Jets.

Probably best to just call it a bad day at the office for Mac Jones when discussing the Patriots wideouts. DeVante Parker was on the field throughout but caught only 2 short passes. Four other wideouts played 40-50 percent of the time (maybe Jakobi Meyers wasn't 100 percent, also without doing anything. If Bourne gets cut today, that will make the others look a little better, and the next two matchups make them look great, period. But there are no difference makers here, and nobody will realistically be putting Nelson Agholor or Tyquan Thornton into a lineup with much confidence. Maybe Meyers and Parker next week.

My occasional mockery of other teams' tight end situations doesn't look as good when supposed viable starters like Dawson Knox get shut out entirely. How Knox goes from catching 7 for 70 against Cleveland to catching 2 passes for 17 yards the last two weeks combined is hard to figure. With New England, the identical and huge contracts the team gave Hunter Henry and Jonnu Smith a year ago made some sense while Henry was catching 50 passes and 9 touchdowns last season. This year he averages 2 catches per game and has scored twice. Smith also averages 2 catches per game and has 1 TD in two seasons. Are we allowed to make fun of Belichick's free agency moves? The guy has won a billion Super Bowls so he doesn't need to care what I say about anything. But just two more receivers who aren't doing anything for New England these days.

Some credit must be given to both defenses. The Bills have had some injuries, not only in the secondary but not including losing Von Miller for at least the next four games, but they've continued to be very good most weeks, with 31 sacks and 13 interceptions (20 takeaways). I've started them along without regret and will continue to do so the rest of the way. And the Patriots have also been excellent, short on stars but quietly 2nd in sacks (39) and 4th in takeaways (19). Their offense might be godawful and hurt by Belichick hiring his old poker buddies to run things, but the man can still oversee a great defense.

Bottom line though, the Patriots are 6-6 and probably headed for 8-9 or 9-8. That's not gonna get it done in the AFC, and there will be changes in the offseason.