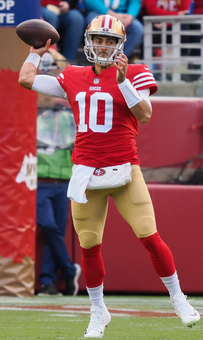 Garoppolo out for season

There have been better days of football. Some offenses are just out-and-out bad these days, and others were hurt by injuries during the course of yesterday's contests. As expected, most of the late-afternoon games were good yesterday, but they were overshadowed (also as expected) by an ugly primetime affair. Let's get through them and move on.

Steelers at Falcons: Steelers are playing some good defense lately, probably coinciding with getting T.J. Watt back and also matchups with teams like the Falcons. Virtually every offensive player disappointed, with Drake London the lone exception. Cordarrelle Patterson had a touchdown erased by a penalty, which doesn't make anyone feel better. Atlanta, also, might be playing slightly better defense nowadays. Just one catch for George Pickens, and a drop (arguably two) for Diontae Johnson. But Steelers win.

Broncos at Ravens: Lamar Jackson hurt in this one on a sack. Supposedly not season-ending, but we'll see what the news is today. Tyler Huntley should be rostered, obviously. Predictably, Denver didn't score any touchdowns, settled for field goals and a 6-point lead, and lost by a point. Had a couple of near fourth-down stops, but nearly winning games is the story of the Broncos' season. Greg Dulcich with a nice game, Jerry Jeudy decent. Not sure Courtland Sutton played at all. Not an offense that can support multiple receivers, really. Baltimore ground game did virtually nothing; many teams have been able to run on the Broncos so I'm not giving them all the credit. Next week, probably J.K. Dobbins returns, crowding the committee even further.

Packers at Bears: This one was all Bears early, including a long Justin Fields touchdown run. But the offense stalled after that, and their defense is really bad. Good game for AJ Dillon, and 2 more touchdowns from Christian Watson, who it's really tough to bench right now. One a pretty great end-zone catch (and throw), the other an end-around. I guess the Packers are alive for the playoffs; this is a better team than its record. But realistically it's not gonna happen. Schedule not awful the rest of the way, at least.

Jaguars at Lions: Was figuring on a shootout, but turns out the Lions defense is legit playing better these days, and the Jaguars couldn't keep up their end of the bargain. Trevor Lawrence suffered a pretty scary looking knee injury early on, but lucked out and was fine the rest of the way. Great game for Amon-Ra, touchdowns for Williams (early) and Swift (late). Disappointing by the Jaguars; I'm not buying Detroit's defense quite as good as it seemed.

Browns at Texans: Man, who'd have thought Lovie Smith wouldn't work out as the head coach of the Texans. Right, everyone. The offense has completely imploded with Kyle Allen at the helm (speaking of ships, 1899 fans, anyone?), helping the Browns to score a pair of defensive touchdowns (plus a special teams score) and win without doing very much on offense. We figured Deshaun Watson would mostly hand if off to Nick Chubb, and there was some of that, but more of the offense watching the defense win the game. Be glad you got what you did from Dameon Pierce, could easily have been worse. Houston is at Dallas next week, that should go well.

Jets at Vikings: Entertaining game, with the Jets offense not quite impressing, and their offense moving the ball but having to settle for field goals (which has been the way of things against the Vikings defense all year long). Big games for Garrett Wilson, Zonovan Knight and Mike White, but too many red-zone misfires right up until the game-ending force for an interception. Minnesota's two big guns, Justin Jefferson and Dalvin Cook, were a-ok. Perhaps it was Adam Thielen who saw most of Sauce Gardner, I saw plenty of Jefferson abusing other defensive backs trying to stick with him.

Commanders at Giants: The reason ties generally suck is it's easy to see a number of ways one of the teams could have won. The Giants getting a key late fourth quarter stop, as a for instance, but hats off to Taylor Heinicke for making a couple of legit great throws on the run, one a remarkable play to convert a fourth down deep in his own end on the final drive. Heinicke made a couple of Mahomes-level sandlot plays in this game -- I'm not saying he's Mahomes, but impressive stuff. But then after forcing overtime, and getting a stop, Washington drove to the very outskirts of field goal range, only to run two plays into the line and then have to punt from midfield. These teams will play again in two weeks (Washington's next game), hopefully one will win it.

Titans at Eagles: When the Eagles are on their game, tough to stop them. Titans very tough on the run but can be passed on, and the Eagles have quite a duo in A.J. Brown and DeVonta Smith. Those guy were running free in the secondary and/or taking balls away from defensive backs (Brown caught a touchdown off a guy's shoulder pad) all game, helping Jalen Hurts have a monster day and rendering everything else done by either team fairly moot. Great touchdown grab by Treylon Burks, holding on after a helmet-t0-helmet hit that he didn't return from and will make him uncertain for the next game.

Seahawks at Rams: Credit is due the walking dead Rams for making this one interesting and competing throughout. Cam Akers with a couple of touchdown runs, while Kyren Williams barely touched the ball and wasn't targeted in the passing game; not ideal for those of us who started Williams. The Rams Defense, incidentally, did not show up, which is why Geno Smith, Lockett and Metcalf all had huge days. Kenneth Walker might have also had a good game, but he left with an ankle injury that will need to be looked into. Is Geno currently the NFC West's best healthy quarterback? Er...

Dolphins at 49ers: Jimmy Garoppolo suffered a season-ending injury in this one, with his foot getting awkwardly twisted/crushed on a sack. It's all going well for the Seahawks this season, who also own the horrible Broncos' first-round pick. Brock Purdy fared OK in his absence, but I'm not sure he can get them where they want to be (winning at Philadelphia? Unlikely). Tua Tagovailoa uncharacteristically erratic in this one, forcing some throws and missing others. Two huge plays to Trent Sherfield (first play) and Tyreek Hill (late), but a lot more bad than good. San Francisco wins, their defense played great, but they'll be looking not so purdy the rest of the way on offense.

Kansas City at Bengals: This was the back-and-forth game expected, with two of the game's best quarterbacks (not best young quarterbacks, but best) making plays with their arms and legs and making throws. But there's no doubt who has the better group of wideouts right now, and Tee Higgins and JaMarr Chase kept making big plays (Tyler Boyd, alas, dropped one of the easiest touchdowns you'll ever see). I think people have pretty much given up starting Boyd, but still. Both Kansas City running backs scored, and Kansas City does have Travis Kelce, but it was a game that made you wonder a little if they'll miss having a top wide receiver come playoff time. Kelce got stripped for a late fumble but he's allowed the once a season miscue I think.

Chargers at Raiders: Chargers defense had an early Pick Six, making it look initially like they'd be controlling this one. But their offense generally sputtered, and the Raiders hit some big plays -- that Davante Adams guy, he's pretty pretty good. Another nice game for Josh Jacobs, too. Chargers made things interesting at the end with a great fourth-down Herbert to Keenan Allen touchdown, but were playing catchup a lot of the way and their defense just isn't able to get any stops. Good game for Gerald Everett, but just not enough good things from Los Angeles.

Colts at Cowboys: This one was painful, especially for those of us who started Jonathan Taylor, Michael Pittman and Dalton Schultz and watched those guys combine for zero touchdowns and just a handful of catches, too. Schultz nearly scored before the half, but that was the lone highlight from the trio (although Taylor certainly tried to overcome the offense around him). Dallas looks like one of the league's best teams at times, loaded on offense and opportunistic on defense, with Mike McCarthy looking like mid-90s Barry Switzer, benefitting from all the talent on the field. The Titans lost at Philadelphia but moved one step closer to clinching the AFC South with the Colts looking pretty unlikely to win much the rest of the way.

Monday, Monday: Nothing like a Saints-Bucs matchup to make you appreciate Sunday's games a little bit more. Both offenses have been shaky of late and both defenses have some ability, so a sloppy low-scoring affair seems to be in the cards. Anytime defensive touchdown props, anyone? I'll take the Bucs 23, Saints 17.