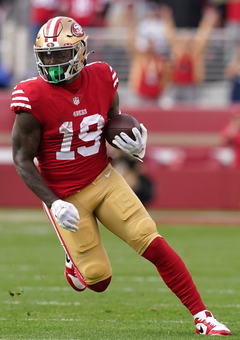 A Weekend of Football

Seahawks at 49ers: This game was pretty scary for a while, if you had a playoff roster reliant on San Francisco (as I do, and I'm sure many Index readers also do). If you watched either or both of the Seahawks-49ers games during the regular season, you saw a Seattle team that didn't score any offensive points at all in one game, and just a couple of field goals and a garbage-time touchdown in the second game. So to see Seattle come out trading blows in the first half, with a Kenneth Walker touchdown followed by DK Metcalf blowing by coverage and being hit perfectly in stride for the second touchdown, well, it was surprising and alarming.

But the world started spinning normally in the second half. San Francisco's offense kept on moving the ball against a Seattle defense that was bad all year and wasn't about to suddenly become good in Week 19. And the San Francisco defense stepped up with a couple of big plays. Suddenly it was San Francisco up 20 points, and all but Seahawks fans could relax and start making plans for the next week. Brock Purdy rightly deserves some credit for a couple of plays where the pass rush seemed to have him but he scrambled around and hit open receivers, including the clinching touchdown to Elijah Mitchell. I don't think Jimmy Garoppolo makes those plays. I saw some argument online dismissing Purdy as "a system quarterback." Well...yeah. And? So was Jimmy G, so was Tom Brady at the start of his career. You can win Super Bowls with those guys, many teams have done so. Maybe Purdy implodes in the next round of the playoffs, or the round after that. But he's in the mix to start for San Francisco next year; job won't be handed to Trey Lance, who hasn't played a lot of football for more than three years now. Nice game for Deebo Samuel (pictured), who I rostered but left on my bench thinking he'd be worked in sparingly. Next week! As for Seattle, they've got some nice building blocks for the future, and the 5th overall pick in next year's draft. Not a bad year.

Chargers at Jaguars: Of all the "tale of two halves" games in NFL history, there aren't many that compare to this one. I'm thinking everyone saw it but some key takeaways I had. First, the Chargers defense made Trevor Lawrence look bad in the first half, sitting on short routes and jumping passes (most notably Asante Samuel Jr.), making it look like Lawrence's playoff debut was going to be one of the all-time horrific ones. The first quarter in particular seemed to take forever, and while it wasn't all on Lawrence (there were some n0n-calls by the refs as bad as you'll see), he looked like he was going to throw 10 interceptions. And the Chargers easily moved the ball up and down the field, with some easy Justin Herbert completions and easy Austin Ekeler runs. Game over, right?

Well no. Because Lawrence started hitting throw after throw, making a huge lead narrower with each drive. And although I believe the Chargers continued to get three offensive plays each series before punting, I can't confirm it because somehow they failed to generate more than a single field goal from halftime on, with a poorly timed 40-yard miss (classic Chargers) that would have put them up 13 points midway through the fourth quarter, and a couple of quick punts. And suddenly you had the Jaguars scoring a touchdown to pull to 30-26, Joey Bosa taking a helmet-throwing penalty to help encourage the Jaguars go for 2 (balls of steel that Doug Pederson), and nothing was surprising after that. What more needs to be said? Jaguars are your this year's Team of Destiny. Chargers going to have yet another long, soul-searching offseason.

Dolphins at Bills: So not an impressive showing by Buffalo. I think the most notable fact is the defense really misses the injured players in the secondary (yes, including Damar Hamlin), and the pass rush in particular misses Von Miller. Skylar Thompson looked credible leading the offense at times, specifically because so often he had so long to stand back there looking and waiting for a receiver to come open. He's not good, and was really inaccurate on a lot of throws (final stat line: 18 of 45, yikes), but if you give even a lesser third-string quarterback enough time, eventually there will be an open receiver on some plays. And then there's what the Bills are doing on offense. James Cook is a neat player with some giddy-up, but why they were running him into the line on some of the final series rather than Devin Singletary was mystifying. Was Singletary hurt, was ball security a concern; I kept wondering if I missed something. And on the final two plays of the game they gave the ball to Singletary and he dragged half the Dolphins defense past the first-down line. Might want to use him more as the lead runner.

And then there were the Josh Allen turnovers. It's been a season-long problem, and it cropped up after Buffalo was seemingly on the way to a blowout win, up 17-0. He was also sacked 7 times -- the Miami defense came to play. And suddenly a one-sided win was a one-score game for most of the day. For Miami, it was weird they didn't run the ball more. It wasn't happening, but sticking with it rather than only giving Jeff Wilson 10 carries would seemingly have been better. End of the day, Bills win, Josh Allen and his main targets all made enough plays. But the fact that the game was that close doesn't speak well of this team's ability to beat Kansas City, neutral field or no.

Giants at Vikings: We knew the Vikings defense was bad. It was bad all year. Yesterday, it looked like it had only 9 players on the field for a lot of the game, with receivers running open all day long. But for a Darius Slayton drop on New York's final series, Minnesota would never have got the ball back at all. I think the major takeaway is if you live on the razor's edge all season long, as Minnesota did, it will eventually catch up to you. New York moved the ball at will all game long. Hard to win games when that's happening, and the success started to dry up for the Vikings late in the year. The magic ran out yesterday.

This is not to take anything away from Daniel Jones, who made himself a lot of money this season and yesterday. He's going to remain New York's quarterback, and sign a big contract. I was getting Eli Manning vibes yesterday, in a good way -- clutch throws throughout the game. And of course the well-timed runs that have been part of the offense all season. Hard to believe that he's doing it with a very modest receiving corps, but maybe Richie James and Isaiah Hodgins just needed more of a chance. New York winning in Philadelphia, the way they played yesterday and the way the Eagles stumbled down the stretch (without Jalen Hurts of course, but still), doesn't look impossible. If I were to carp at all, it'd be why the team didn't run Saquon Barkley a little more in the second half, especially the final couple of series. Minnesota shouldn't have got the ball back at all. The Giants determined Minnesota was weakest against the pass, and it worked, so hats off to them. But they should run more next week, with Philadelphia's defense inclining the other way -- worse against the run, tougher on the pass.

For Minnesota, a great season comes to a crashing end, as has happened so often to them for decades now. I don't know what to say about that last play, where Kirk Cousins threw a 4-yard pass to a well-covered T.J. Hockenson on fourth-and-8, besides that one's going to stick with him all offseason. Rookie mistake from a veteran who had a great year and actually a great game yesterday. A little weird that Justin Jefferson had such a huge first few series and was barely used after that. Lost a touchdown on a review --

(Quick aside: is the game better for these freeze-frame reviews on Jefferson's TD and then the Hayden Hurst TD, where a 5-minute review determines that part of the player's forearm or shin touched down a fraction of a second before the ball crossed the goal line? Is this really what instant replay should be for?)

-- but simply didn't get many looks after halftime. Kind of their best receiver, should be used more. T.J. Hockenson the beneficiary, nice for those of us who started him, but really should have been more Jefferson. Tough offseason for Minnesota, which is going to need to build that sorry defense from the ground up. Could have won this one, but wouldn't have gone much further.

Ravens at Bengals: A week ago I was writing about Jaguars-Titans, saying "when was the last time a fumble-return touchdown decided a big game?"And then we got this one, where the Bengals zoomed out to what should have been a 10-0 lead, missed an extra point, and it was basically all Ravens after that. Lots to unpack from this one, in no particular order:

Back to the game. Big game for JaMarr Chase, quiet for the rest of the offense. They really couldn't have let Joe Mixon score that short touchdown Joe Burrow snuck in? The quarterback sneak is really killing running back value, and we had a couple of those scores just yesterday -- Burrow, Cousins, maybe one I'm forgetting. C'mon coaches, show some love to those of us starting Mixon and Cook. Right, right, they don't care about us.

Tyler Huntley played well enough to win. But for that goal-line fumble, he probably would have (and he was inches from a winning Hail Mary yesterday). Which win was less impressive yesterday, Buffalo's or Cincinnati's? All I know for sure is you're feeling really good if you're a Kansas City fan right now.

Monday, Monday: I don't love the Monday night playoff game. Like the 7th playoff team in each conference, it's just unnecessary. I get it, it's all about money. But the playoff weekend ending on Sunday night is better. I think tonight's game should be higher-scoring, and could go either way. I think I picked Tampa Bay initially, and I'd be 5-0 on the weekend but for the Chargers' collapse. But Dallas winning, if Dak can avoid turning it over, would not be a surprise. But I'll go Tampa Bay 27, Dallas 24.