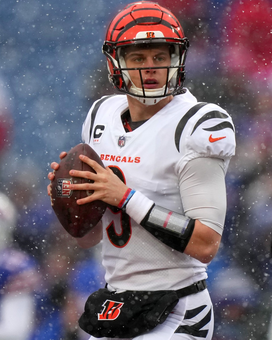 A Weekend of Football

The championship games we deserve

With respect to Wild Card Weekend or Super Wild Card Weekend, the Divisional Round is always the best weekend of playoff football. Invariably the teams belong there; the wheat has been separated from the chaff, getting rid of the Dolphins and other teams only in the postseason these days because the league can't leave well enough alone.

Slight difference this year seems to be that the gap between teams 1-4 and 5-8 also looks pretty big. Last year when Kansas City knocked off Buffalo in this round, you could say, wow, either one of those teams would have been a great Super Bowl representative. This year? The four losers from the past two days all looked to be a fair step below the teams that beat them. Hard to argue that we're not left with four clear top 2 teams in each conference right now. Jaguars and Giants look at least a year away. Bills and Cowboys? Are they a year away, or a year past? Offseasons of questions coming up.

Kansas City 27, Jaguars 20. This game was overshadowed fairly quickly by Patrick Mahomes seeming to break his ankle early on. Rarely will we see a quarterback trying to stay in the game while literally hopping to and from the huddle. We now know that Mahomes has a high ankle sprain, which should make for some interesting player prop bets for him for next week. He shouldn't be running at all, and you've got to figure it will affect his passing numbers too, as it did in the second half of the win over Jacksonville. The prohibitive favorite to lead the playoffs in passing prior to the injury now looks iffy to get by the Bengals. The opening line has Kansas City favored by a point and a half, which is probably based on home field and overall reputation of Mahomes. My quick thought is I see zero reason why the Bengals shouldn't be favored in this game (but we'll be talking about it plenty the rest of the week).

With Mahomes damaged and Chad Henne in the lineup, Jacksonville had a chance in this game. What was weird, to me, was the offensive usage of JaMycal Hasty and Jamal Agnew for some key plays along the way, which burned them on Agnew's critical late fumble, and I think also on a Hasty drop. Seemed like Doug Pederson getting a little too cute with a wide receiver who should have been limited to special teams and a running back not nearly as good as Travis Etienne. It didn't ultimately matter because Jacksonville had no ability to cover Travis Kelce at any point during the game, but it always bugs me plays which might have worked with better players getting a breather hurt them. Trevor Lawrence deserved better, throwing a perfect bomb to Christian Kirk that was dropped and then sacrificing his body to pick up a key first down right before Agnew killed the drive with his fumble. Jacksonville doesn't have anything to feel bad about though; some defensive improvements are in order, but this is a team that looks like the favorite in the AFC South the next few years.

Eagles 38, Giants 7. Props to Ian, who last week wrote of the Giants, "They have essentially no chance of making a run at the Eagles." Seemed aggressive to me when I was reading it, but turned out to be 100 percent accurate. New York didn't belong on the same field with the Eagles, who moved the ball at will and stuffed everything the Giants attempted to do. I was out at a bar with a bunch of Giants fans and by halftime we were barely even paying attention to the game. A disaster of a football game, and I may be slightly revising my expectations of who's going to represent the NFC in the Super Bowl. Philadelphia looked mortal down the stretch, with Jalen Hurts...hurt... and the team maybe coasting a little too soon. But for much of the season they looked like far and away the best team in the league. And they looked like it this past weekend, too.

New York needs to figure out what to do with Daniel Jones and Saquon Barkley; I think both will be back. They need to add a true No. 1 wide receiver, which might not be easy. But I think they have to feel fairly good about their team, despite the obvious gap between them and the Eagles right now. Seem to be headed in the right direction, which can't be said about many other NFC teams right now.

Bengals 27, Bills 10. Ironically enough, I picked the Bengals to win this game on Saturday. I say ironic because I didn't pick them at the beginning of the playoffs, loading my playoff rosters with Kansas City and Buffalo players, and because even picking the Bengals to win I had no idea how totally they'd outclass them. The venue didn't matter, quieting all the neutral field pleas from Bengals fans. The weather didn't matter. Cincinnati moved the ball at will and stuffed almost everything Buffalo tried to do. An additional JaMarr Chase touchdown that would have made the final score even uglier was overturned by a very close replay review. This was a bludgeoning by a Bengals team that looked much better in every phase of the game.

Buffalo should have won that Kansas City playoff game a year ago, and I think I went into this postseason thinking they'd break through this year. But that was clearly delusional. Their offense really wasn't very good the second half of the season. And their defense, having lost several players in the secondary and Von Miller from the pass rush, was especially weak at the end. Turns out their narrow win over Miami with Skylar Thompson at quarterback last week was a fairly accurate representation of where the Bills are at right now. This team needs a running back, a wide receiver and some more players on defense. Still the best team in the AFC East, but a level below Cincinnati and probably a healthy Kansas City (although KC also has some problems).

49ers 19, Cowboys 12. I had this sweet over-under parlay going where I bet the unders on each of the first three games, and hit, but bet the over on this one (ugh). Silly me thought Dak Prescott would have some success against an occasionally leaky San Francisco secondary, and the 49ers offense would keep on doing this thing. Instead, both offenses had a lot of trouble with the opposing pass rushes, and we got this lower-scoring battle that really didn't make either team look like it's going to measure up well with Philadelphia next week. Prescott in particular followed up one of his career-best games, at Tampa Bay, with one of his worst, under pressure throughout, throwing a couple of bad interceptions, and also being badly off-target on a couple of deeper throws where his receivers beat their defenders but had to wildly contort their bodies to even have a chance at catching them, and generally failing. Aside from what the offense failed to do, and there were plenty such plays, you had Brett Maher missing his only extra point and KaVontae Turpin blowing a chance at a kick-return touchdown by running directly at the kicker instead of going around him.

There's some heated debate on Twitter over how good or bad Brock Purdy is, with some certain he's fantastic and others certain that Trey Lance will be the Week 1 starter. A lot of the debate just misses the point -- these decisions don't need to be made now, and we'll have another game or two of evidence to go on before anyone needs to worry much about the future. Purdy wasn't great yesterday, but he was pretty good, maybe not in the box score but in the game I was watching, making mostly accurate throws and good decisions, not winning the game but also not losing it while facing a good pass rush and a defense that was playing pretty well (I think Dan Quinn will in fact be a head coach next season, perhaps in Denver). Now, can Purdy go into Philadelphia next week and get a win, that's a little iffier. But I don't think he's dramatically less likely to do so than Jimmy Garoppolo would be, and he's dramatically more likely to do so than Lance, based on everything Lance has shown and not shown to this point.

So the Championship Games are set, and we'll preview them here this week. My initial thoughts are that the teams that looked better this past weekend, Philadelphia and Cincinnati, will look better next weekend. But we'll take a closer look and who knows, maybe something will crop up that goes against that. Either way, I don't think we can be disappointed with what we'll get next week, or in the Super Bowl. The best teams are right where they should be today.