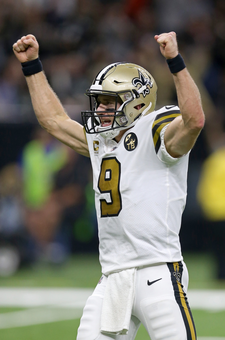 Who are you most thankful for?

ASK THE EXPERTS appears weekly from training camp through the Super Bowl with answers to a new question being posted Thursday morning. How the guest experts responded when we asked them: Who are you most thankful for this fantasy season?

Melvin Gordon has been the most consistent fantasy player when he plays the entire season. He's helped multiple of my teams march towards the fantasy playoffs, and he only cost a late first-round draft pick!

Nazarek is the CEO of Fantasy Football Mastermind Inc. His company offers a preseason draft guide, customizable cheat sheets, a multi-use fantasy drafting program including auction values, weekly in-season fantasy newsletters, injury reports and free NFL news (updated daily) at its newly re-designed web site. He has been playing fantasy football since 1988 and is a four-peat champion of the SI.com Experts Fantasy League, a nationally published writer in several fantasy magazines and a former columnist for SI.com. He's also won in excess of $20K in recent seasons of the FFPC High Stakes Main Event. www.ffmastermind.com. Nazarek can be reached via email at miken@ffmastermind.com.

Frank Reich. Coaches matter. That’s been underscored with guys like Sean McVay, Kyle Shanahan and Sean Payton. A good coach can bring an offense to life. Reich wasn’t the first choice for the Colts (they had a deal with Josh McDaniels, recall) but it looks like he might be a top-5 offensive coach for years and years. His changes have helped that offense rank 5th in scoring, just a notch behind the likes of the Saints, Rams and Kansas City. Andrew Luck is looking like the guy everyone thought he was going to be when they drafted him — seven straight games with at least 3 TD passes.

Allan co-founded Fantasy Football Index in 1987. He and fellow journalism student Bruce Taylor launched the first newsstand fantasy football magazine as a class project at the University of Washington. For more than three decades, Allan has written and edited most of the content published in the magazines, newsletters and at www.fantasyindex.com. An exhaustive researcher, he may be the only person in the country who has watched at least some of every preseason football game played since in the early 1990s. Allan is a member of the FSTA Fantasy Sports Hall of Fame and the Fantasy Sports Writers Association Hall of Fame.

Most thankful for DeAndre Hopkins. In a year where all the early picks scarfed up those great running backs, the back half of the draft just got riskier. Not with Hopkins. He delivers every week, no matter who the opponent is. He’s just as consistently productive as any wideout. He’s as consistent as a running back.

Dorey is the co-founder and lead NFL analyst for The Huddle and author of Fantasy Football: The Next Level. He has projected and predicted every NFL game and player performance since 1997 and has appeared in numerous magazines, newspapers, radio and television.

Across my leagues I have many great players. Over the last two weeks I have been thrilled as Zach Ertz and Tyreek Hill led big comebacks for me in key games. I think that both of them are as good or better than other WRs and TEs and I am glad to have them. While players seemingly win games for us, this is still a team game. We need depth, not only in our starting lineups, but also on our benches. You cannot win championships without strong backups. This year I was able to draft a lot of players that others let fall to me—Alvin Kamara, Christian McCaffrey, Hill, Ertz, Jared Goff, Drew Brees and more. I am 1st in scoring in two leagues and 2nd in two others. In August, all the analytical software told me my team all suck. If sucking is 45-21, with three 10-1 teams. I want lousy teams like these every season.

I’m most thankful for Drew Brees. Besides delivering value on his own depressed ADP for this year, Brees remains a hyper-efficient passer who dramatically enhances the fantasy output of everyone around him. Without Brees, Mark Ingram would be Matt Breida, Alvin Kamara would be Dion Lewis, Michael Thomas would be Mike Evans (maybe) and TreQuan Smith would be a guy most of us ignore.

Schauf is a senior analyst with DraftSharks.com. He has been covering fantasy football since 2002, producing content for outlets such as Sporting News, Rotoworld, Athlon and Football Diehards before landing with DS. Draft Sharks has been online since 1999 and is a 4-time winner in the FSTA’s annual fantasy football projections accuracy contests.

Well this is an easy one. Super thankful to be riding Patrick Mahomes in my personal family and friends league, my first fantasy football league which is year 29 of play. We play total points (it’s like a Fanduel model created back three decades ago), with a weekly winner and a season-long champ plus we recognize second and third place. We built the league literally off the old Miller Lite Fantasy Footbook that came out at stores at the time, an old famous icon which some may recall if you’ve played long enough (and are old enough to remember!). Landing Mahomes has been awesome -- particularly in a league like that we award touchdowns at 6, 9 or 12 points based on distance. Additionally, I drafted Tyreek Hill in the second round so the hookup has been simply amazing. I have a huge lead and should be cruising to the title this year.

For me, it's Michael Thomas. Early in the second round, there were a bunch of similar wideouts, and I seemed to keep drawing that draft slot. It was usually Thomas or Keenan Allen who I had to choose from. Thankfully, I chose Thomas more often than not, and week in and week out, he has stepped up to carry my team. He literally won me a couple of matchups with his long touchdown to clinch the Saints win over the Rams two weeks ago, putting those teams in the playoffs. Thank you, Michael Thomas: let's keep it going for just a few more weeks.