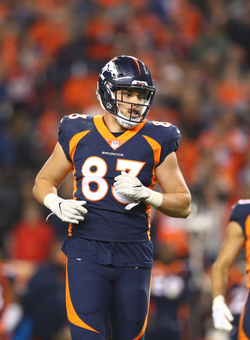 LaCosse, Quinn among youngsters who should be rostered

The waiver wires are locked in my various dynasty leagues right now; I think that's the case in a lot of leagues. But window shopping is encouraged, so we can all look at the players who we'll be adding once the draft happens and veterans can be scooped up. Here are some of the intriguing ones, in no particular order.

Jason Witten, Cowboys. Witten is the shining example of a player who had no value back in January and wasn't rostered in fantasy leagues, but now is potentially a fantasy starter -- especially in leagues that award 1.5 points per reception to tight ends. I know, he's 37 years old, might play limited snaps, and probably won't be a difference maker. But tight end isn't the NFL's deepest position right now, so the chances of him being a fantasy starter in a lot of weeks, PPR anyway, are pretty good.

Matt LaCosee, Patriots. If you eschew aging veterans like Witten, perhaps you'll consider a youngster possibly replacing such a player? Rob Gronkowski retired, leaving New England with virtually nothing at the position -- annual preseason tease Jacob Hollister, who I actually still have rostered in a league, and recently signed LaCosse. He's 26 years old and had a couple of 4-catch games for the Broncos last year. He's a guy who might actually be selected in our annual rookie draft (picks can also be used on available veterans), just on the upside of possibly being New England's main receiving tight end. Most likely they'll draft somebody or acquire another veteran of some kind, but you never know.

Justin Watson, Buccaneers. Tampa Bay's fifth-round pick last season suddenly finds himself in line for significant snaps in Bruce Arians' Jameis Winston-led offense. DeSean Jackson and Adam Humphries are both gone. Obviously Chris Godwin is set for a breakout, but they'll have a viable No. 3, too. Watson, come here, I want you.

Trey Quinn, Washington. Wrote something about Quinn here recently so I won't dwell on him. Jay Gruden considers him the favorite for slot receiver duties, replacing Jamison Crowder, which is good enough to ensure he should be on a roster. He also looked pretty good with his opportunities last preseason, before injuries wrecked his rookie season.

Maurice Harris Bruce Ellington Braxton Berrios, Patriots. OK, Berrios isn't actually available, somebody else has been stashing him since last preseason. And Ellington, while productive, has a knack for getting hurt and not sticking anywhere too long. So let's make Harris the most intriguing recently signed wideout by the Patriots, who know that Julian Edelman is on his last legs. No one should underestimate a receiver who has the potential to one day get significant snaps, particularly in the slot, in New England's offense.

Mike Boone, Vikings. Latavius Murray is in New Orleans, but Minnesota will certainly look to work in a No. 2 running back behind Dalvin Cook. One candidate is former Lion Ameer Abdullah, but I've already burned a first-round rookie pick on him a couple of years ago, that ship has sailed. Boone showed promise last preseason and in my mind is the favorite for those No. 2 duties.

Corey Coleman, Giants. New York's top 2 receivers in the wake of the foolhardy Odell Beckham trade are Golden Tate and Sterling Shepard. Maybe they'll use a high pick on a wideout, but as Coleman proves, sometimes those guys don't work out, especially right away. Coleman stands a reasonable chance to be one of the team's top 3 wideouts in 2019, maybe the best bet to be running the deeper routes with Tate and Shepard more likely to run shorter patterns.

Tyler Kroft, Bills. Buffalo might well draft a tight end, and they could also favor carryover Jason Croom as the main pass catcher at the position. Then again, they signed Kroft to a three-year, $19 million contract, and he's got some receiving ability -- 42 catches and 7 TDs back in 2017. Possibly the team's No. 1 at the position, and should be on a roster in TE-friendly scoring systems.

Darren Waller, Raiders. One more tight end to consider. Waller is a converted wide receiver who was most generally a disappointment in Baltimore. He was suspended for the entire 2017 season. But the Raiders lost Jared Cook, and no team offers less at the tight end position than they do right now. Waller, and another perennial disappointment in the recently signed Luke Willson. Waller might be somebody to keep an eye on more than actually roster, but let's see if the Raiders fail to come out of the draft with someone significant at this spot.

Raheem Mostert, 49ers. We've discussed San Francisco running backs plenty. Mostert, clearly, is going to make the roster after the contract he got, even if it's just for his special teams contributions. But let's see. Matt Breida is always banged-up, and Jerick McKinnon is always just a play away from his next injury. If you're going to add a No. 4 running back at the bottom of the roster, somebody from Kyle Shanahan's team is a good choice.